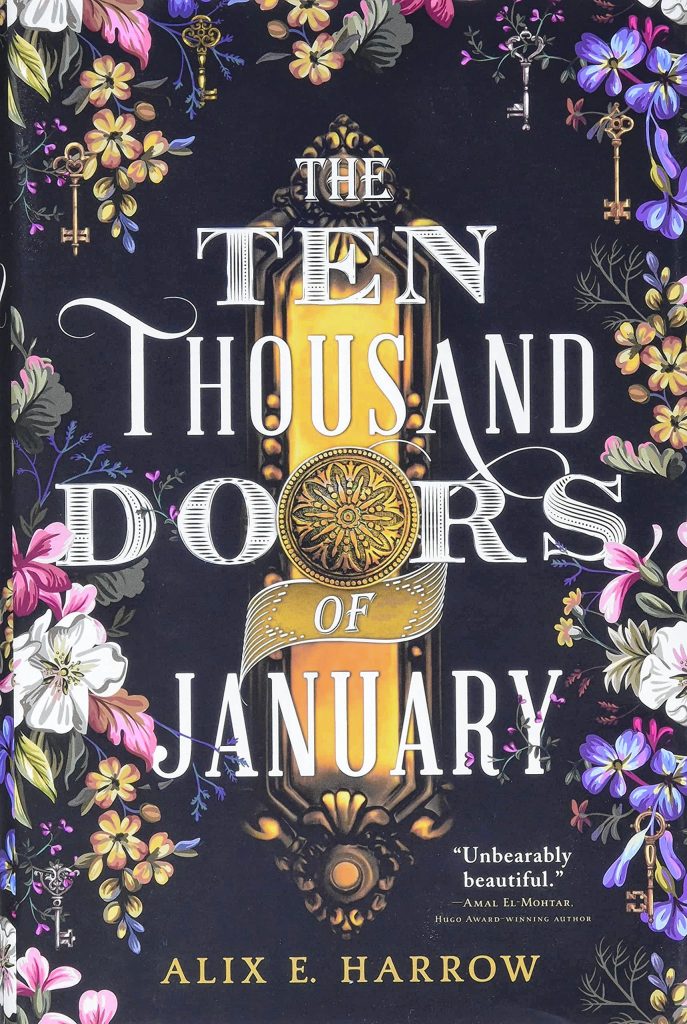 The Ten Thousand Doors of January

The first thing I noticed about this book (besides the gorgeous cover) was the incredibly beautiful prose. Alix Harrow’s lyrical, enchanting writing draws the reader in by painting a world that appears relatively ordinary on the outside, but faintly shimmers with the possibility of a universe beyond our own.

In the early 1900s, seven-year old January Scaller lives in Locke House, under the care of Cornelius Locke, owner of the house and member of the mysterious and exclusive New England Archaeological Society. January’s father works for Mr. Locke, traveling to the far reaches of the globe to uncover unusual artifacts to ship back to Mr. Locke in Vermont. January endures subtle and not-so-subtle acts of racism; her father is black and her mother is white. The members of the Society describe her as “oddly colored” with coppery skin and rust-colored coiled hair. Disgustingly, they treat her as a “rare” curiosity to puzzle over. January is a daring child with a wild spirit, constantly getting into mischief and having adventures that get her into trouble, much to the chagrin of Mr. Locke. She leads a fairly reclusive life, with only her dog Bad (short for Sinbad) and Jane, her African governess, for company. One day, January’s wanderings lead to the discovery of a mysterious door (or Door, as Harrow capitalizes it). This door appears in a remote and random location at the edge of a field, and as January opens and goes through it, she is led into a strange land with salt-tinged air and high cliffs overlooking a white city by the sea. When Mr. Locke learns of January’s discovery, he becomes upset and locks her away in her room. Over the course of several years, January forces herself to forget the Door and the new world she found, and resolves to become a perfectly well-behaved girl to everyone in her life. However, upon finding a mysterious, ancient book hidden among the artifacts of Locke House, January is swept back into the memory of that fateful day when she was seven. She has just found out that her father is missing and quite possibly dead, and uses the book to escape from this horrible reality. The book tells her of Yule Ian and Ade Larson, two people from two different worlds who meet through a Door similar to the one she found in the field years ago. In their separate spheres, Yule and Ade search for other Doors into other worlds and eventually find each other. As January reads on and becomes more imprisoned by Mr. Locke and his associates, she learns more about these other dimensions, and about Yule and Ade.

Through this ancient book, January realizes her own capacity to shape her destiny outside the walls of Locke House. She uncovers realities and truths she never thought possible, but her strength poses a threat to Mr. Locke and the other members of the New England Archaeological Society. It is difficult to describe more details of this novel without revealing too much of the plot, but I will say that as I was reading, it quickly became one of my favorite books I’ve ever read. Harrow’s dazzling writing style combined with elements of fantastical time travel and keen observances of society’s flaws in a time gone by (but alarmingly reminiscent of our own, with the issues of racism, classism, and unfair use of money and influence), make this a novel about almost anything and everything. The most commanding message of this story is that the words we use have immense power and implications; we must understand our responsibility to use these words wisely, for they can restrict, degrade, and corrupt, but also expand, restore, and make whole the very world in which we live.