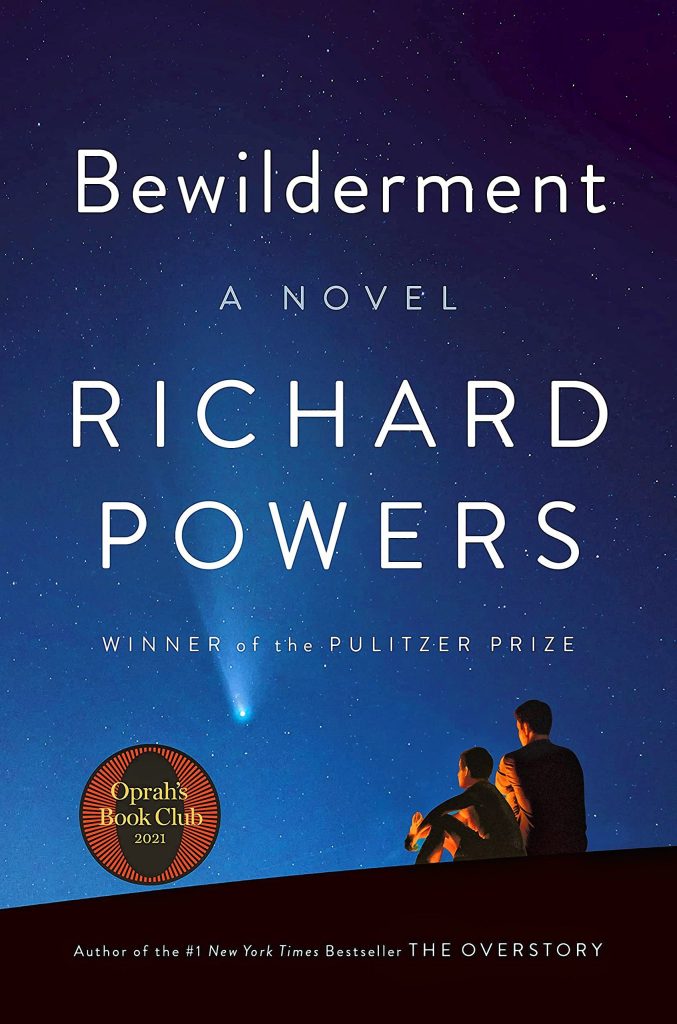 Like any good dystopian sci-fi, Bewilderment take place in a plausible — almost TOO plausible —near-future setting. As through looking into a funhouse mirror, we watch the characters move through a society that’s almost recognizable as our own, impacted by technology that feels like it’s just over the horizon of our real-life here-and-now. The science itself isn’t the draw, of course: the aim of this novel (and others like it) is to act as a warning. In Bewilderment, as in many of his other works, Richard Powers focuses on the possible, or even likely, impact of an America in the throes of unchecked partisanship, consumerism, and ecological destruction. There but for the grace of God go we, readers.

The novel’s protagonist is an astrobiologist named Theo Byrne, who programs digital models of far-distant planets to predict the possible genesis of extraterrestrial life. His wife, Alyssa, who died two years ago in an accident, was an ardent ecologist and animal-rights activist. From this man, with his head in deep space, and this woman, with her feet on the ground, came their son Robin: a bright, sensitive little boy with unspecified psychological issues and no cohesive diagnosis from doctors. Theo is doing his best to parent Robin, but can’t quite get a handle on his son’s temperamental outbursts. When one of these outbursts ends with Robin sending a classmate to the hospital, administrators threaten to expel Robin from school if he does not undergo some sort of behavioral intervention.

This is where things start to get a little kooky. Before Alyssa’s death, she and Theo underwent an experimental psychological process called Decoded Neurofeedback, or DecNef. Essentially, the process creates a map of a Subject A’s brain waves, and Subject B uses that map to learn to regulate his or her own emotions. In a last-ditch attempt to keep Robin off of psychoactive medication, Theo reaches out to the experimenters and gets Robin into the program as a Subject B. The catch? Subject A — the person whose brain patterns Robin is sharing — is Alyssa. Robin is “jacking in” to recordings of his deceased mother’s brain, and learning to turn his rage into her compassion. The implications of this process reach far beyond the small Byrne family — especially after the media discover and commodify little Robin for the masses.

The relationship between father and son is the heart and the anchor of this beautiful, haunting story. The natural world — ours, and the untold potential worlds of other solar systems — is also central. While Powers’ ecological message may be slightly heavy-handed, he earns redemption through his sumptuous descriptions of life in all its bizarre, awesome iterations. Other significant themes include grief and loss, empathy, neurodiversity, and the untold ways in which the past shapes our present and future. Certain turns of phrase were so gorgeous that I jotted them down to ponder later.

This is not a feel-good novel. Powers has a lot to say about modern humans and the way that we treat each other and other life forms — and it’s not complimentary. Bewilderment’s strength is in the quiet, deliberate way that Powers makes us feel for Theo, and for Robin, and for the gorgeous, fragile world that they only want to keep from destruction. If only we would slow down and really SEE, Powers seems to be telling us, perhaps we could avert the fate that awaits this sad family and their chilling world.