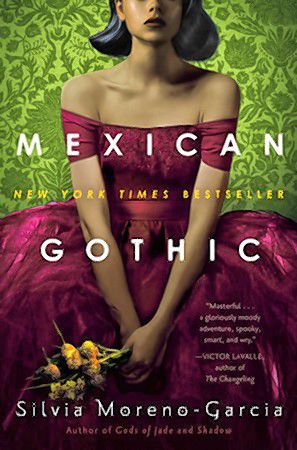 Set in a remote mining town in 1950s Mexico, at first blush, Mexican Gothic doesn’t seem like the ideal setting for a traditional gothic tale. However, Moreno-Garcia expertly creates a cloying, dreary, and ghastly ambiance. The setting itself becomes a primary character, its atmosphere entwined with spine-chilling plot elements and mysterious characters.

Nóemi Taboada is a young, privileged woman from Mexico City who relishes her title of a wealthy socialite. Her life of leisure is soon interrupted, however, when her father shows her a troubling letter he receives from Nóemi’s cousin, Catalina. Newly married, Catalina lives with her husband, Virgil Doyle, and his family in an ancient manor called High Place, overlooking the mining town of El Truinfo, from which her husband’s family made their fortune. In her letter, the typically effervescent Catalina seems morose, frantic, and paranoid, as she claims Virgil has been poisoning her, and that “fleshless things” lurk in the walls and hold her captive. Catalina implores Nóemi come to High Place to rescue her from the evil that lurks around her. At her father’s insistence, Nóemi agrees to travel to High Place, and she is suddenly thrust from her world of luxury and into an actual nightmare.

The Doyles had once made their fortune on the backs of the Mexican miners they essentially enslaved, and now High Place stands as a crumbling edifice that seems to be rotting from the inside out. Mysteriously, and also disgustingly, the manor has gradually been overtaken by a strange fungus, of which the Doyles apparently show no concern. The corrupted, festering shell of High Place, along with the mist and damp cold that continuously engulf the house and its grounds, are defining characteristics of any gothic novel. The mines long since abandoned, the violent past of the Doyles continues to haunt every corner of High Place, and the state of the manor mirrors the Doyles’ lack of humanity.

Catalina, now bedridden, appears almost catatonic, and Nóemi is determined to discover what has happened to her. Virgil dismisses her symptoms as side effects from a recent illness, and explains that Catalina regularly receives some form of “treatment,” but Nóemi can tell that something is terribly wrong. The house itself seems to pulse with sickness, no thanks to the Doyles and their twisted obsession with eugenics and racial purity. They hold no qualms sharing their views with Nóemi, knowing full well that such sentiments could make her feel threatened. Nóemi braves this and many other horrors in her quest to discover what plagues her cousin. Nóemi begins having distressing dreams (another hallmark of gothic literature), and she also starts seeing and hearing ghostly apparitions.

Along the way, she receives support from the one Doyle family member who doesn’t exhibit the bigotry and cruelty of the others: Virgil’s cousin, Francis. While he appears to be the sole source of reliability for Nóemi, the continuous ghostly encounters, ill-treatment from the other family members, and ever-present sense of foreboding make it uncertain whether Francis can truly be trusted.

This book embodies the strongest gothic characteristics usually seen in works from the likes of Emily Brontë, Bram Stoker, and Shirley Jackson. Garcia Moreno gives a fresh take to the genre by imbuing the story with additional unsettling evils not rooted in the supernatural: racism, classism, and the ghosts of colonialism. The evil presence of the Doyles rivals any frightening spiritual encounter Nóemi contends with. Will Nóemi be able to defy the power of the Doyles, uncover the truth of High Place, and save Catalina in the process? Pick up this new classic from Silvia Moreno Garcia at the library, if you dare!