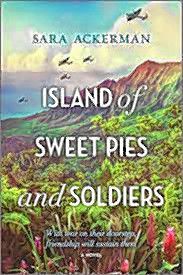 Island of Sweet Pies and Soldiers

It’s 1944, wartime, on the big Island of Hawaii, in the little town of Honoka’a. It’s three years after Pearl Harbor and one year since Violet Iverson’s husband Herman disappeared. Violet’s ten-year-old daughter Ella is troubled. She’s been picking at her freckles, making scabs, and wetting her pants. Violet thinks that Ella knows something about Herman’s disappearance. But Ella isn’t talking.

The war is close to home, raging in the Pacific. Violet works with her Japanese neighbors, and is fond of them, and Ella wants to go to Japanese school to learn how to sing and do origami. There are tensions in the town about the Japanese, but half the town is Japanese, and lots of them are their friends. Violet and Ella have a housemate, Jean, and the three of them become close. Marines come to build a base near the town, including Jean’s brother, Zack, and his friend Parker. Violet and Parker are attracted to each other, but Violet won’t let herself love anyone until she finds out about her husband. The Marines add some fun to their lives, joining in at a rodeo, and coming over for dinner, and to sing. They also bring their wildly unusual mascot Roscoe and Ella is smitten. She loves animals, but this one is something she never thought she’d see! Violet, Jean and their friend Setsuko start a small business, selling their homemade chocolate honeycomb pies and coconut sweet potato pies to the Marines. Earlier Setsuko’s husband Takeo was taken away to an internment camp because of some malicious rumors. Violet is intent on finding out about her husband, helping Takeo, and keeping Ella safe during the war. And Ella is keeping a cane knife near her bed. “But not for the coconuts.”

This is a title that someone reviewed at a Books & Brew meeting recently. It’s an interesting story, a blend of historical fiction, romance, and mystery. It has a vivid sense of place in Hawaii, with wonderful details about the landscape and weather. There are lots of popular World War II books out right now, but this is the first one I’ve read that was set in Hawaii. Especially striking is the love between the friends, and the courage of the women and of Ella.