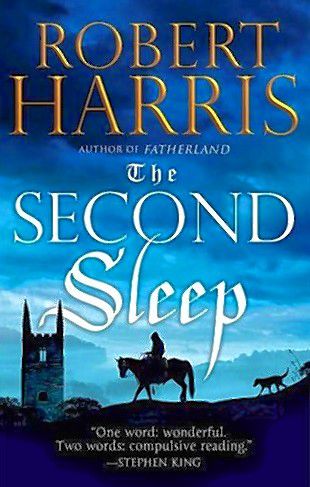 The Second Sleep opens in the year 1468. A young English priest, Christopher Fairfax, hastens to reach a remote village in the kingdom of Wessex before curfew. Fairfax has been sent to officiate a funeral for the local priest, Father Lacey, who recently died and left behind no other clergy to look after his affairs.

At first, the story reads like classic historical fiction. Father Fairfax encounters all the markers of a typical medieval hamlet as he reaches Addicott St. George on horseback and is greeted by Father Lacey’s housekeeper.

And yet … the savvy reader will begin to detect subtle elements that aren’t quite right for the setting. Father Fairfax is startled by a “common parakeet” on the road. He passes a tower that is said to have been standing for well over a thousand years. He encounters a grandfather clock inside Father Lacey’s home — curious, for something that shouldn’t even be invented for another two centuries. The clues accumulate quietly, until Father Fairfax sorts through some of the deceased Father Lacey’s personal effects. Among them, he finds paper money, plastic straws, and a non-functioning iPhone. The paradigm shifts and the plot thickens. (I can’t tell you how much it pains me to expose that twist, which Harris masterfully sets up and then reveals to his readers. Fortunately, it happens early in the book, so I haven’t spoiled too much!)

When Harris finally pulls wool from our eyes, we learn that this story takes place not half a millennium in the past, but 800 years into the future. In 2025, some sort of global collapse, known as the Apocalypse, destroyed modern industry, technology, communications networks, and, over time, most physical infrastructure. Massive loss of life led to worldwide depopulation. Humanity essentially “started over” after the catastrophe, taking centuries to reach the rough technological equivalent of Europe in the Middle Ages. (The years were re-set after the crash; if you were curious, it’s now 1468 in the post-Apocalyptic calendar). One thing that does survive from the pre-Apocalypse era is religion. The clergy, which is organized similarly to the medieval Catholic Church, is now responsible for maintaining social control over the entire population. Too much knowledge of the “before-times” is deemed dangerous, in ways that feel slightly reminiscent of The Handmaid’s Tale.

Where the story really takes off, then — and where I’ll leave you — is that Father Fairfax finds himself investigating the death of Father Lacey, which feels increasingly suspicious. Father Lacey’s collection of ancient artifacts and archives provides useful clues, but possessing them is strictly forbidden. Will Father Fairfax solve the mystery of his colleague’s death, or will he be branded as a heretic? Will his newfound understanding incite a crisis of faith — and is it worth it? This isn’t a flawless story by any means (some plot points stick, if you think about them too hard), but I found it to be, overall, a well-crafted and enjoyable work of speculative fiction. The title refers to the actual historical practice of waking up for a few hours in the middle of the night, between one’s “first sleep” and “second sleep.” It’s an interesting metaphor, begging the question: what if we, right now, are sandwiched between the Dark Ages of history and a dark age yet to come?