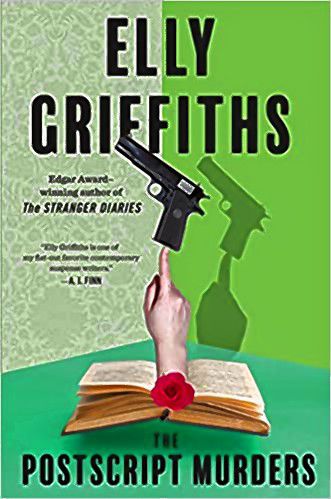 An unlikely trio set out on the trail of a murderer, following clues that lead them to a literary festival in Scotland.

Peggy Smith is an older woman who lives in assisted living housing, Seaview Court, in England. Her “carer,” Natalka, finds her sitting by the window one morning. Peggy has passed away. She is pronounced dead from natural causes. But Natalka thinks that it was murder. Peggy has numerous crime novels in her flat. And she is mentioned in almost all of them. The authors are thanking Peggy for her help with “the murders.” The books are dedicated to Peggy, some by a famous author, Dex Challoner. Natalka finds a business card of Peggy’s that reads “Mrs. M. Smith, Murder Consultant.”

Natalka contacts Detective Sergeant Harbinder Kaur and tells her that she believes that Peggy was murdered. Harbinder is skeptical about the case. But she begins investigating. Harbinder lives with her parents and we get to see some of her home life with her affectionate, hard-working parents.

Natalka enlists her friend Benedict to help her find the murderer. Benedict, a former monk, now a café owner, is unsure about it, but he is smitten with Natalka, so he agrees to help. They are going through the crime novels in Peggy’s flat when a postcard falls out of one of them. The postcard says “We are coming for you.” This definitely has a sinister ring to it. And then a masked gunman rushes into the flat and steals one of Peggy’s books right in front of Benedict and Natalka! They are stunned but determined to carry on.

Edwin, a dapper, older gentleman was one of Peggy’s neighbors. He was fond of her, and offers to help.

The trio discovers a clue and they believe that they need to travel to Scotland to the Aberdeen Literary Festival. The amateur investigation begins to resemble a road trip, complete with sandwiches, coffee and candy treats. Natalka urges them on. They meet the famous Dex Challoner and other authors. Natalka believes that dangerous people from her checkered past are following her. Then another murder occurs and Harbinder joins them in Scotland to help solve the crimes.

This is a fast-paced, intricate mystery, with engaging characters, a great sense of humor, and a vivid sense of place.