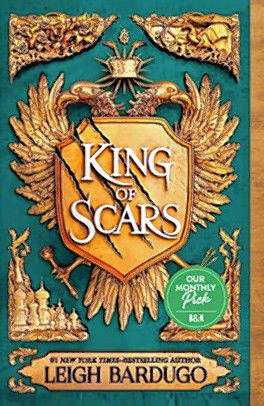 Leigh Bardugo does it again. Utterly fascinating. I couldn’t help myself — read this one in one sitting, it was so enthralling! Nikolai Lantsov, King of Ravka, attempts to bring peace and prosperity back to his land and people after the civil war. The failed coup of the Darkling saw the death of the Shadow Summoner, but now, three years later, a cult has grown in worship of him. More unsettling still is that Nikolai – briefly transformed into one of the Darkling’s shadow monsters during the war — starts to have bouts of regression into the inhuman creature’s form. Does the Darkling’s power reach from beyond the grave? Was his work part of a larger primeval force? With the help of his top general Zoya Nazyalensky, Nikolai must travel to the heart of what was the Shadow Fold in hopes of vanquishing the monster within and to understand Grisha power and the connectivity of the Universe. Nina Zenik, meanwhile, is on a mission in Fjerda to save and evacuate persecuted Grisha. Grieving the loss of her beloved Mathias, Nina hears the whispers of the dead drawing her to a small village. There she uncovers a horrifying new method for creating Grisha slaves. To save these victims and deliver justice for those who have already past, she’ll have to put both her mission and her country at risk. But can Fjerdans see the victims as humans in need of aid, or will their fear and hatred of Grisha excuse and abet the horrors inflicted? This book jumps right back into the Grishaverse that has captivated readers of the “Shadow and Bone” trilogy and the “Six of Crows” duology. While the previous two series can be read as stand alone, this one is best read after having read at least one of the previous series, for context. The sequel hit shelves March 30 and Netflix aired its Grishaverse adaptation April 23, so these books are in high demand!