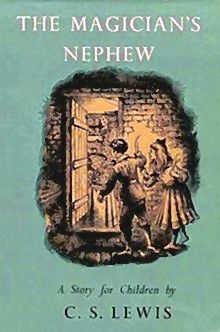 Digory and Polly meet in London in the summer of 1900, in the garden of one of their houses. They discover that there is an attic passageway between their houses, row houses that are all connected. They start to explore the passage, but accidentally open a door into Digory’s Uncle’s study. Uncle Andrew is an eccentric man who calls himself a magician. Uncle Andrew tricks Polly into touching a magic yellow ring and she vanishes. He convinces Digory to go after her with a yellow ring, taking two green rings so that they can return. Digory and Polly arrive in a strange world, the “Wood between the Worlds.” There are pools in the woods, and each pool leads to another universe. They try another pool, and in that grim and terrifying world Digory awakens the evil witch queen Jadis by mistake. Digory and Polly try to escape from Jadis, but she follows them back to London. Jadis causes an uproar and commanders a hansom cab. The children realize that they have to get Jadis out of their world, but accidentally end up taking Jadis, Uncle Andrew, the cabdriver, and his horse with them! They arrive in a place that the Witch calls nothing, but soon they hear a voice singing. It is the lion Aslan, and he is singing Narnia into being, Narnia’s mountains and valleys, plants and animals. His singing is bringing things to life. More adventures follow, including ones with talking animals, flying horses and magic apples. Digory is allowed to take one magic apple back to give to his sick mother. He plants a seed that becomes an apple tree. And that tree’s wood is eventually made into an enchanted wardrobe, the same wardrobe in the famous book, The Lion, The Witch and the Wardrobe.

This is book one in The Chronicles of Narnia series. It’s a wonderful tale, full of vivid characters. I really liked the loyal Digory, and Polly, who stands up for herself and uses her common sense. They are a good team. There are clearly forces of good and evil woven into the story. And the image of Aslan singing the world of Narnia into being and creating all the different animals is unforgettable.