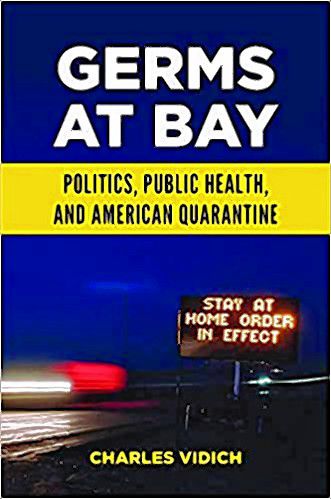 Michael Kaufman will visit Gibson’s Bookstore virtually on Feb. 2 at 7 p.m. to present his new thriller, The Last Exit! Perfect for fans of Ben Winters and Cory Doctorow. In this thrilling near-future novel, the secret to eternal life is closely guarded by people who will do anything to protect it – even if it means destroying everything in their path.

Kaufman is the author of two novels and seven works of non-fiction. He has worked with the United Nations, governments, NGOs, educators, and companies in fifty countries to promote women’s rights.

Join Gibson’s Bookstore for a virtual author event exploring the history of plague management in America on Feb. 9 at 7 p.m. via Zoom.

Few know that one of the greatest 19th century proponents of quarantine was none other than Paul Revere, whose influence on public health strategies has been less emphasized. Join us for an evening with Charles Vidich, author of Germs at Bay: Politics, Public Health and American Quarantine, and a fresh look at the region’s role in an area of study that feels straight from the headlines today. When American history is viewed through the lens of quarantine we find remarkable keys to why the American Revolution first took place in Boston and why vaccination became an accepted public health measure in colonial New England but not elsewhere in the colonies. Vidich discusses these and other fascinating tales from decades of research, in conversation with Laconia Daily Sun columnist Elizabeth Howard.

Vidich is a consultant and advisor on public health and bioterrorism issues and was appointed a visiting scientist at the Harvard School of Public Health, working for 10 years on national quarantine policy. He has numerous publications on occupational and environmental health and served as incident commander for the U.S. Postal Service’s national anthrax response in 2001–2002. He holds SM and MCP degrees from Harvard and has received numerous White House, EPA, and Postal Service awards for his environmental and anthrax response work. He serves on the Connecticut Council on Environmental Quality, appointed by the Speaker of the House.

Howard is an author, journalist and creative director. Her books include Queen Anne’s Lace and Wild Blackberry Pie (Thornwillow Press, 2011), A Day with Bonefish Joe (David R. Godine, 2015), Ned O’Gorman: A Glance Back (Easton Studio Press, 2016) and The Book(s), Ned O’Gorman Artist Books (Publication Studio, 2017). She is the writer in residence for the Randall’s Island Park Alliance in New York City and a columnist for the Laconia Daily Sun in Laconia.