Book of the Week: Coyote Waits 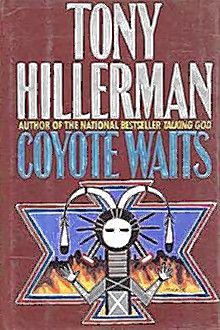 One night on patrol tribal officer Jim Chee calls fellow officer Delbert Nez to arrange a break at a gas station for coffee. Nez is on the track of someone who has been painting the rocks on the hills nearby. But Nez doesn’t show up. When Chee goes to find him, he finds the car Nez was driving in flames. Chee pulls Nez out of his burning car. But Nez has been shot dead. Chee must discover if the drunken older man on the scene, Ashie Pinto, is really the killer. And Chee must deal with his own guilt. He didn’t realize that Nez was in danger, and Chee might have helped Nez if he’d been there. A lone bright spot in this ordeal is that Janet Pete has returned to Albuquerque. Chee has always been interested in Janet. But now Janet is Ashie Pinto’s lawyer, which creates tension between them. Meanwhile, Lieutenant Joe Leaphorn has been asked by a relative of Pinto’s to look into the case. They insist that Pinto is innocent; that Pinto didn’t drink anymore and that he wouldn’t kill anyone. These different stories begin to converge. There’s also the rumor that an outlaw legend might have met his end in the nearby hills. If that were true, it could be worth a fortune to the person who discovers it and could prove it. And it also might be something to kill for. The Navajos have a saying “Coyote is always out there waiting, and Coyote is always hungry.” Read this classic southwestern mystery by Hillerman and find out how the saying features in this tale.

I re-read this mystery after reading it years ago because I wanted to hear about the characters of Jim Chee and Joe Leaphorn again. They are well-written and unique. Tony Hillerman’s mysteries are rich with Navajo culture, and the adventures are set in the spectacular and desolate Southwest. They are worth re-reading. And if you haven’t read them, you should give them a try.