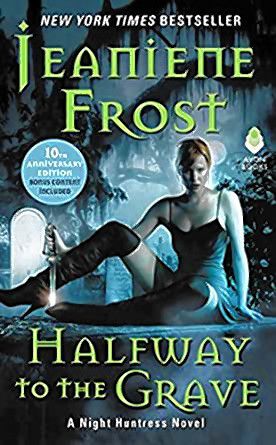 Halfway to the Grave

If you’re a fan of Buffy the Vampire Slayer, you’ll love Halfway to the Grave. One spunky, sarcastic heroine plus one brooding, suave vampire equals a push and pull romance that will leave you wanting more.

Cat, a half vampire-half human, is dead set on killing every last vampire to atone for the crime against her mother that caused her abomination. But Bones, a British vampire who also hunts vampires, crosses paths with Cat, and their lives are changed forever.

Striking up a deal, Bones agrees to train Cat to have deadly skill against vampires if she agrees to only kill the ones he wants dead. There’s a plot afoot in the vampire world that Cat doesn’t know about, but much to Bones’ protests she gets wrapped up in. Can Bones convince Cat to love herself for what she is? Or will Cat finally plunge her silver stake into his heart because he made one flirty joke too many?

You won’t be able to put this book down. I read it and then immediately reread it through the point of view of Bones (the author has chapters of this point of view on her blog). The best part is, it’s the first in a series, so you will be able to get your Cat and Bones fix again and again.