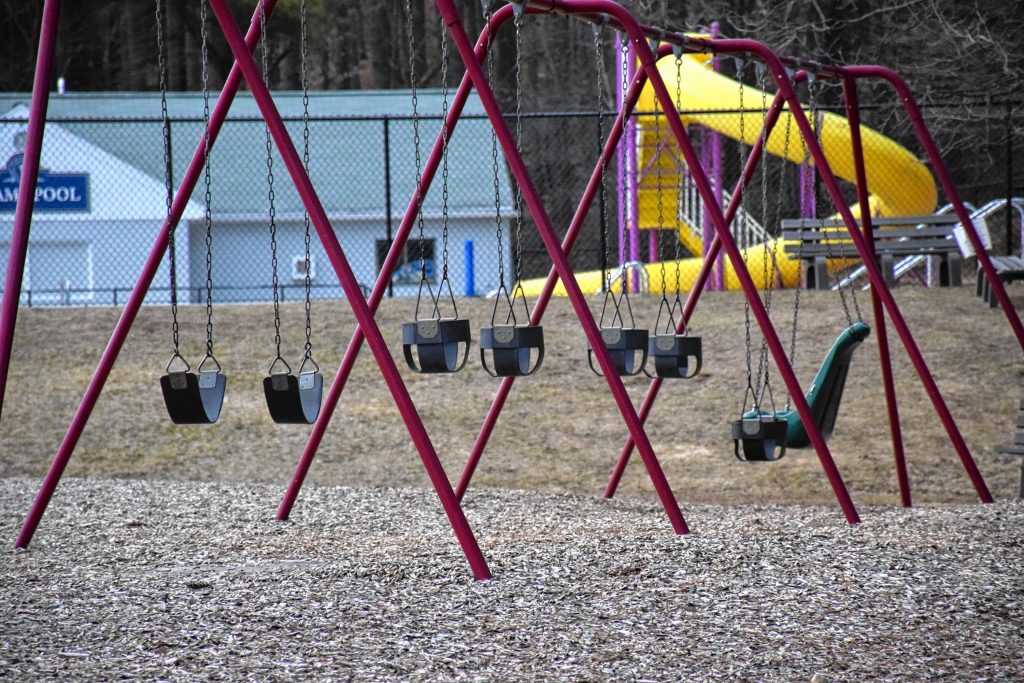 Adams Playground in Peterborough is now closed to the public. Courtesy Photo

As the COVID-19 shutdown spreads, we know not to get close to other people. But what about pets? Swingsets in the park? The daily copy of the Concord Monitor?

Should we stay away from those, too?

This virus is so new that answers are still being developed, but a study published Tuesday provided some guidance.

Scientists from the National Institute of Allergy and Infectious Diseases sprayed the virus in an aerosol that duplicated the droplets created by coughing or sneezing, and then measured how long it stayed infectious on surfaces. Their study was published in the New England Journal of Medicine.

Before we get to details, note that epidemiological studies of this outbreak haven’t yet found evidence of transmission via surfaces. Contagion seem to happen when the virus is transmitted via aerosols, the tiny droplets we expel when we cough or sneeze that can be carried by air currents.

The study found that the virus stays viable for about three hours in aerosol droplets. If somebody inhales a droplet during that period, or if it ends up on their hands and then they touch their nose, mouth or eyes, the virus can enter their system.

But long experience and research has shown that aerosol droplets dissipate in the air or fall to the ground relatively quickly, sometimes within 10 minutes. In general, then, contagion is only likely if you’re close to an infected person – hence the six-foot rule for gatherings.

As for surfaces, the study found that as is the case with similar viruses such a SARS, the novel coronavirus lasts longest on smooth, non-porous surfaces. On plastic and stainless steel, for example, the researchers found that it was still viable after three days.

However, that’s not as dangerous as it sounds because the strength of the virus declines quickly when exposed to the air.

In general, the study found, the virus lost half its potency every 66 minutes. This means that after three hours, it would be only one-eighth as infectious as when it first landed on a surface. After six hours, the viability would be only about 2% of the original.

This indicates that if nobody has been around for a while then even the most virus-friendly surface, such as a metal handrail on a stairway, is not very dangerous. It’s best to approach them with caution, using gloves or a paper towel as protection for your hand, but we don’t have to avoid touching anything and everything. Just be sure to wash your hands with soap and water as soon as you can.

On cardboard, the researchers found the virus was not viable after 24 hours. On newsprint, which is much more porous than cardboard, it seems likely to stay viable for even shorter periods.

The Monitor has instituted protocols for its delivery staff, providing hand sanitizer and wipes, advising them to wash their hands frequently, and limiting access to buildings with multiple residences. “We’re no longer doing door to door but leaving papers outside,” said Carol Dubuque, the Monitor’s circulation director.

Not surprisingly, the safest material of all was copper, where viruses were inactive after just 4 hours. Because of its atomic makeup, copper and alloys such as brass send ions into microbes on contact and destroys them. Copper’s effect on bacteria and viruses is well known – it has been used for drinking vessels in India for millennia because of its benefits.

And what about pets? There is no evidence that dogs or cats get COVID-19, so they don’t transmit it to the owners, and while the study didn’t examine virus longevity on pet fur, you shouldn’t worry about petting Rover unless somebody has just sneezed on your dog.

(David Brooks can be reached at 369-3313 or dbrooks@cmonitor.com or on Twitter @GraniteGeek.)