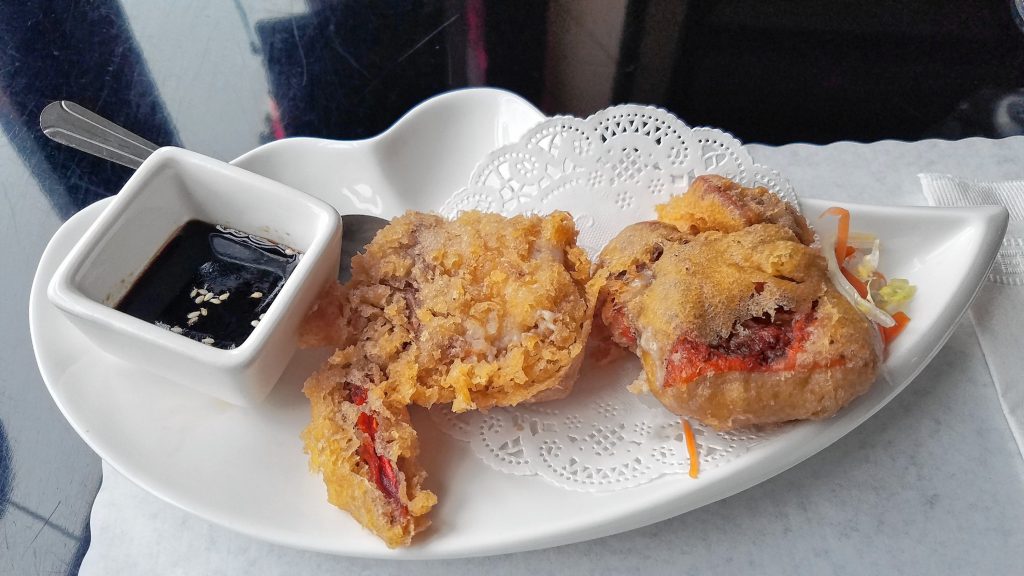 Looking back through the Food Snob archives, a shocking realization was made – we had never tried anything from Siam Orchid Thai Bistro before. The little Thai place has been a staple of the downtown Concord dining scene for years, but it somehow evaded The Food Snob all those years – until now.

On a cold and gloomy day last week, I stopped in to the bistro to try a couple small dishes. After perusing the gigantic menu (literally – the thing is probably a foot and a half tall by a foot wide, at least) for many minutes, I settled on the Tempura Baby Crab, an appetizer, and the Chicken Coconut Soup, something I had never heard of before.

While I don’t normally comment on wait times, it’s worth mentioning here that I was in my seat a good 5 minutes before anyone came over to take even a drink order. Once I was waited on, though, things sped up – it was probably less than 10 minutes after placing my order that the soup was brought out.

The first thing I noticed about the soup was the aroma – as soon as the bowl was put down in front of me I could smell that rich, sweet scent of coconut. The first bite tasted exactly like it smelled. It was not all that dissimilar to a hot pina colada with chicken, mushrooms and green onions in it, actually.

The chicken pieces were big, tender chunks of white meat, and the mushroom pieces were equally large. Those two ingredients fit right in with the sweet coconut broth. The little slices of green onion really changed the dish, adding some herby spice and a bit of crunch, which was pleasant. I ended up really liking this soup, even though I couldn’t tell whether I wanted it to be sweeter or more savory.

Minutes after the soup was served, the crab came out. Sometimes places will serve the crab whole, in one piece, but at Siam Orchid it came out split in two. This just made for utensil-free eating, as I used my hands to each eat half.

The crab was incredibly crispy on the outside and soft on the inside, just like it should be. This particular crab was expertly prepared, with not a drop of grease dripping off, nor a soggy spot anywhere to be found. There was enough batter to make it crispy, but not so much that it gets in the way of the crab.

The sauce was also very tasty. Described as simply a sesame soy sauce, it tasted a lot more complex than a standard soy sauce. It made for a nice dipping sauce, and when I got to the final morsel, too big to fit into the sauce cup, I just poured the sauce over the piece and ate it like that.

I’ll admit that I am a big fan of soft-shell crab, and this was one of the best-prepared ones I ever had. On the other hand, I had never had or even heard of coconut chicken soup, but after trying it for the first time, I have become quite a fan.

If you like to try different and very tasty dishes, give Siam Orchid a try.