The Yogi: Yoga and the Great First Bike Experiment 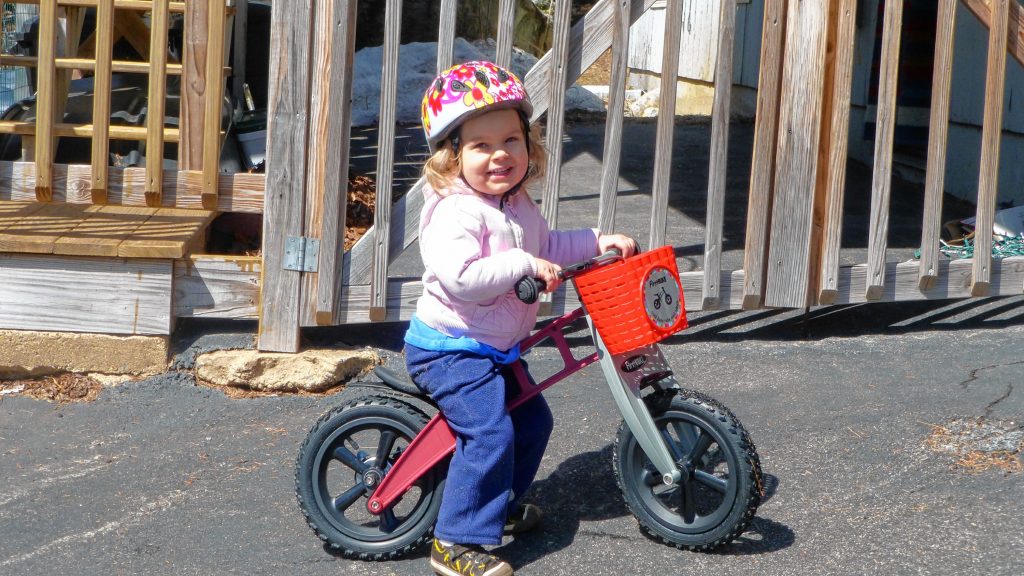 Learning yoga is a lot like learning how to ride a bike. If at first you don't succeed, try, try again. Courtesy of Mike Morris

It was Oct. 1, 2013, my daughter’s second birthday. The sun was bright, the air was cold, and the balance bike was a surprise. Looking back, I think I was more excited about the bike than Lily. She was really looking forward to the Pooh Bear cake that my wife had created.

“One more time. For an ice cream?”

I picked up the bike and we retreated inside for cake. And just like that, the Great First Bike Experiment was over. There were some scrapes and a few tears. I had tried logic, bribery and coercion (I’m not particularly proud of that last strategy), and it only made things worse. My daughter had made up her mind.

We brought the bike upstairs to the living room, and it just hung around for awhile. Before long, Lily picked it up, let go, and the bike fell against her leg. She sat on it, grinned, and promptly tipped over. She balanced on the seat, and circled the room, and became wedged between the couch and the wall. Day after day, with every setback and every success, trying became doing. By the time winter was in full swing, we had another baby in the house, and an indoor-bike-riding 2-year-old. In another few months, when the snow finally cleared enough to get wheels on pavement, Lily’s persistence paid off and the Great Bike Experiment had gone from utter failure to stunning success.

Trying a yoga class for the first time, or the first few times, can feel like your own Great Bike Experiment. The body can feel like a new balance bike. You may fall out of poses. You may doubt your abilities. Even if you believe yoga is good for you, it can be daunting to start a practice. You may think, “I can’t,” or “I don’t have time,” or “I’m too stiff, too old or too sick for yoga.” We all start by giving it a try. Like Lily did, start by picking up the bike.

On a sunny summer morning, a handful of years after the first Great Bike Experiment came to a screaming halt, the Morris Family Band was gearing up for an afternoon bike ride. That morning, like many at our house, there were a few things to be done before the ride.

Now, I’ve learned a lot about yoga while on my mat. I’ve learned more about yoga from times like this when the family was working toward a common goal. If yoga is the coming together of body, brains and breath, I’d be the body. My wife would be the brains. My kids would be the breath. We’re a little greater than the sum of our parts when we work together.

Mama, the brains, was keeping things organized, directing the activities and keeping us all on task. Daddy, the body, in great anticipation of the afternoon’s events, was taking a nap. Lily and Rosalia, the breath that sustains us all, were chugging along, humming and buzzing, moving and grooving, to the beat of the day. It often takes a little time to get us all on the same page, and by the time we were ready to go, the weather had changed. The clouds rolled in, the skies darkened and the rain began to fall. It was still warm, but not exactly what you’d call ideal biking conditions.

In three short words, Lily took me back to a winter several years before during which I watched her learn the value of persistence, even when it was hard or felt impossible.

It was a pretty short ride and there were plenty of tangents. There was a good amount of splashing in puddles, dancing with umbrellas and a pile of soaking wet clothes left on the laundry room floor at the end of the day. We might have started off in pieces – body, mind and breath – but we finished up as one.

We learn pretty quickly that things don’t always go as planned. Life throws its little curveballs at us. Walls can rise up out of nowhere and block your path. We all have our own Great Bike Experiment, whether it’s in the driveway or on the yoga mat. Take a tip from Lily. All you have to do is start. Pick up the bike and try. And then, try again.