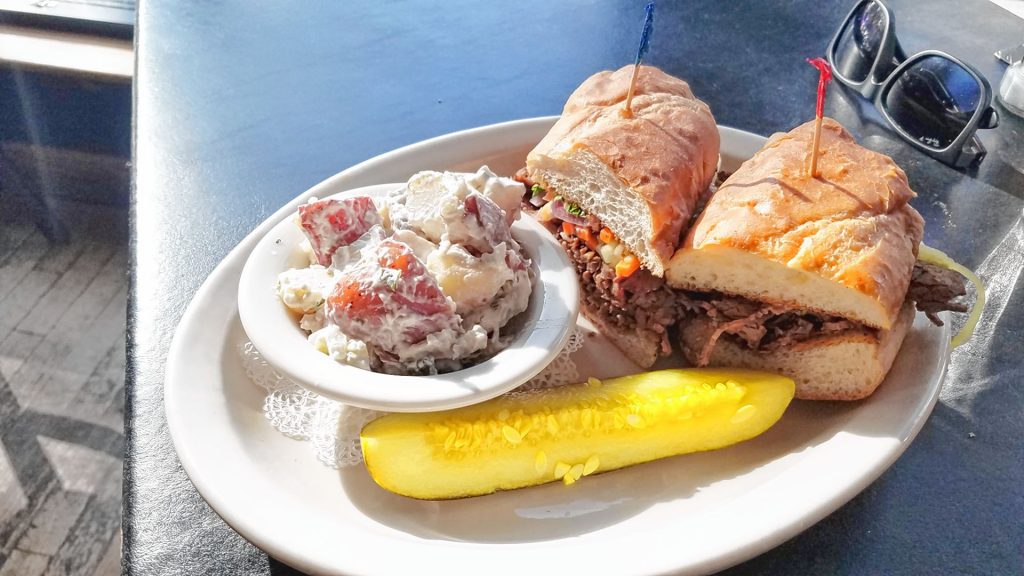 A banh mi sandwich from the Barley House. THE FOOD SNOB / Insider staff

It had been a little while since the last Food Snob installment, and even longer since I ate at the Barley House. On a snowy, windy day last week, we set out to change all of that.

The Barley House may be most known for their burgers, and for good reason. Anyone who has ever had a Barley House burger knows that the hype is warranted. However, burgers are not the only things worth trying here.

While browsing over the lunch menu last week, a certain item caught my eye: bahn mi. I had recently tried banh mi – a sandwich from Vietnamese cuisine – for the first time at Taste of New Hampshire, and I loved it. The specimen I tried at Taste of NH was produced by Lakehouse Tavern, and their offering was a burger, using ground pork. Given the ingredients in that sandwich, it reminded me a lot of sushi.

At Barley House, the banh mi is a little different. Rather than using a ground meat to create a burger, this sandwich is built around shaved beef brisket. It also contains garlic ginger soy sauce, carrots, cucumber, peppers, pickled onions, cilantro and spicy lime mayo, served on French bread. For a side I ordered potato salad, which was the red bliss variety – and who doesn’t love red bliss potato salad?

When the meal was served, I couldn’t help but dive into the potato salad first. With big chunks of red potatoes, covered in light mayo and glistening in the sun at a street-side table, it was hard to resist not devouring the whole serving immediately.

The potato salad was so good it could have stood on its own as a meal. The mayo was definitely there, but it didn’t weigh the product down or get in the way at all – there’s nothing worse than a tub of mayonnaise with some potato bits thrown in, as if often the case with lower quality potato salad. This serving also had a good amount of crunchy pieces of celery and/or onion to provide a pleasing texture.

Soon enough it was time for the main course, the sandwich. This thing was bursting with tender, flaky brisket, and it really looked good on the plate. The first bite was a tiny bit drier than I expected – probably just a little too much bread – but once I had broken the seal, so to speak, it was smooth sailing the rest of the way.

It starts with the brisket, which was as tender as could be. It was almost like a roast beef sandwich, only heartier. The slices were thinner than what you might expect from a traditional brisket sandwich, but of course banh mi is not a traditional brisket sandwich the way we think of that dish, so it makes sense that it would be different in some ways.

While the Lakehouse Tavern’s version did remind me a lot of sushi, this one did not. The Barley House’s banh mi was very savory and more subtly flavored than the Lakehouse’s. The carrots and cucumbers, cut into little batons, added a lot of pleasant crunch. The pickled onions added some acidic kick to the sandwich. The sauces blended everything together and added some extra oomph – not that it needed it. The cilantro added a breath of herbal goodness you normally associate with fresh guacamole.

The best part is that despite all the ingredients, including soy sauce and mayo, this never became a drippy, slippy mess. Never did the bread get soggy or try to fall apart, and not a drop of liquid ever touched my clothing. While a few scraps of the brisket did fall out during a bite here and there, I attribute that to the extreme tenderness of the beef and not from being a poorly built sandwich.

If you like savory Vietnamese sandwiches with lots of ingredients and great texture, give this banh mi sandwich a try.