The Yogi: The great yogi of rock n’ roll 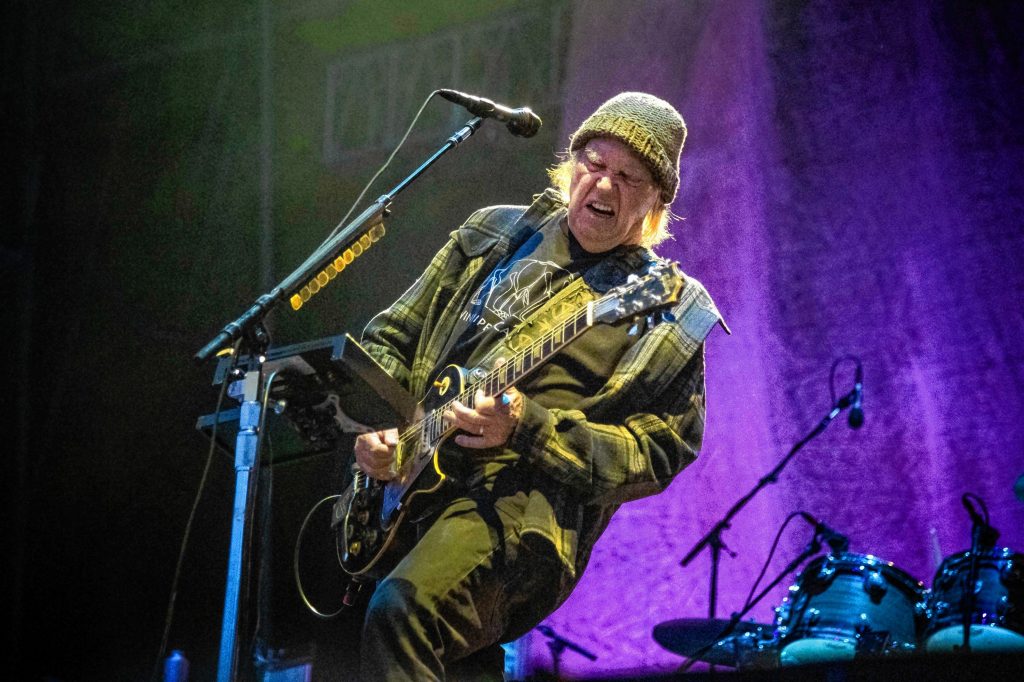 I am sitting in the parking lot of Hot House N.H., listening to David Greene’s interview with the Rock ‘n Roll Hall of Famer on NHPR. The sun is not yet up, and as I sit alone in my car, the glow of the radio feels oddly comforting on this dark, cold morning in New Hampshire. I’m wondering how many other folks are sitting in cars, listening to Neil Young, the great yogi of rock ‘n roll.

He talks about his new record, Colorado, and his 50 year career with his band, Crazy Horse.

In the span of a few minutes, there is anger and humor. There is grace and grit. There is talk about the power of song, and a few bleeped out words. There is also hope.

“Being a musician,” Young says, “enables a person to bend the notes and express things that are inside you, no matter what.” It’s those last three words that seal the deal. No matter what.

Roll out your yoga mat, and move your body, and you begin to express things that are inside you.

No matter what. Neil Young has been bending notes since the ’60s. Forty-one records later, he’s still bending them. One of the great rock ‘n rollers of all time could probably trade in one of his guitars for a yoga mat and do just fine. Maybe he already has.

The man who wrote and performed beautiful acoustic ballads like “Old Man” and “Sugar Mountain” also brought his signature tenor voice and raging electric guitars to “Rust Never Sleeps” and “Keep on Rockin’ in the Free World.” He also did it with his band. His people. His tribe. In his quest to save the planet, the great yogi of rock ’n roll says he strives to make music that is “great, not perfect.” He wants it to “sound real.”

“We’re not trying to impress anybody,” he said. “(We’re) trying to make you feel that this means something to the people playing it.”

This is where yoga begins. You begin to come face to face with yourself. No matter what.

Woke up this morning, in a house of love

The birds were singing, in the sky above

This, from a man who also sang:

It’s better to burn out, than to fade away

I learned the power of yoga in a heated room, surrounded by a lot of people and led by a compassionate teacher. I came to fix my aching neck and back, and I stayed for something more. I learned the power of a song when my older brother stuffed me in a closet and blasted Black Sabbath’s “Iron Man” over and over again. I didn’t have a lot of choice about that adventure. I’m still a little scared of Ozzy Osbourne. Still, the music keeps me coming back for something more.

Just before 6 a.m., the interview with the great yogi of rock ’n roll was over. I turned off the radio, stepped out of the car and walked over to the high bluff that looks out over the Merrimack River.

It was still dark, but I could see the river flowing by on its way to the ocean, and see some light on the horizon. We’re pretty crowded together on this big blue marble, but at that moment I was struck by a great sense of space. Yoga is about creating space. Space in your body, your mind and your breathing. It’s about creating space for us all to feel what it’s like to be human.

“A job is never truly finished. It just reaches a stage where it can be left on its own for a while.”

Thanks, Neil Young. Thanks, Dear Reader. I hope we meet on a yoga mat someday, and share what it’s like to be human for a while.