Blast From the Past: Back in the autumn of ‘67, at a house in Concord, a memory was born

Home » Articles » Blast From the Past: Back in the autumn of ‘67, at a house in Concord, a memory was born 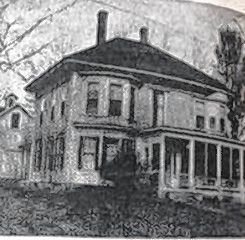 Once upon a time, in October 1967, kids gathered around this house on Penacook Street as the Concord Fire Department set it ablaze. Monitor archive

When Bill Hardiman contacted me regarding the old house that was located on the corner of Rumford and Penacook streets many years ago, some fond old memories returned to me. Those memories date back over 50 years to a cold autumn afternoon in Concord – October 1967, to be exact.

I was still quite young, enjoying the day with friends at White Park. My brother Richard asked me if I wanted to go see a fire – of course, what 8-year-old doesn’t want to see a fire? I hopped on the back of his bicycle and we “doubled” over to the corner of Rumford and Penacook streets to watch the old house engulfed in flames. When Bill contacted me, I started thinking about my early memories, my late brother and the thrill that the fire provided to many youngsters lining the street as that fire burned. I also started thinking about this old memory and decided to conduct a little adult research to see if I could find the story behind that autumn day so many years ago.

The old white clapboarded house located at 36 Penacook St. belonged to Beulah S. Woods and included the property located behind the current day Boys & Girls Club. Beulah Woods actually owned two buildings at this location. One was a two-story, 10-room house with two bathrooms, two heating systems and a two-story attached barn with another addition. The second, smaller house belonging to the family was on the same large lot but known as 55 Bradley St. The Bradley Street property was a one-story single-family cottage with four rooms, one bathroom and one heating system.

Back in 1967, the City of Concord Planning Board suggested the city purchase the entire property for use to expand the Kimball Park playground, and the Board of Aldermen approved the purchase. It was also noted that a portion of this property was located within the lines of the proposed future highway that was proposed to go from Pleasant Street near Concord Hospital to Keane Square near Bouton and North State streets. The City of Concord ultimately paid $30,000 for this property.

The initial plan was to offer all of the buildings for sale and have them removed from the lot. At that point Kimball Park would include the land all the way to the corner or Rumford and Penacook streets. The bids were solicited but not a single bid was received.

As the days passed and the buildings all remained empty, the people of Concord started to question their tax dollars being spent to purchase this property for the Kimball Park expansion. Our town fathers back in 1967 decided to use Beulah Woods’s 10-room home one way or the other – if they could not sell then this would be utilized to educate our young firefighters at the Concord Fire Department.

Several phases of fire training were completed at the Woods property and the Concord purchasing manager said that any person interested in purchasing a boiler, copper water tank, radiators, cast iron pipe, aluminum windows or more should contact him at Concord City Hall.

So, it was on that cold October day that many of the young boys and girls in the north end gathered together as our Concord Fire Department burned the Woods house to the ground. You would think this was a sad ending to the many fond memories held by the family and neighbors as they watched this home burn.

It is interesting that there is more to the story, for as the building burned and the children gathered, new memories have been carried to the next generation. I can still see my brother as the smoke spread slowly across Penacook and Rumford streets and into the crowds, where the watering eyes remained on the fire until the very end.

The years have passed, memories have certainly been lost. That simple fire was a memory I have held on to for over 50 years, a long-ago day when my brother invited me to join him and his friends to watch the building burn.

What 8-year-old doesn’t want to see a fire?