Book of the Week: ‘The Tale Teller’

Home » Articles » Book of the Week: ‘The Tale Teller’ 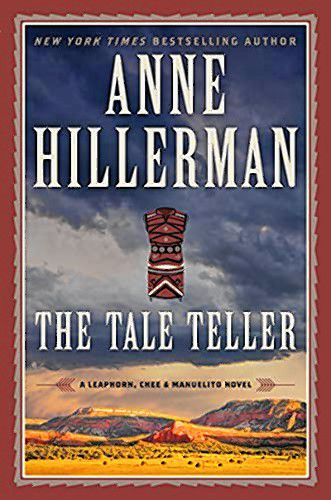 Retired tribal policeman Joe Leaphorn is persuaded to look into a case for Daisy Pinto, director of the Navaho Nation Museum. A traditional Navaho dress and a silver bracelet were not in a box of items donated to the museum. The dress is said to have been worn by Juanita, wife of the famous leader Manuelito. If it is authentic, it would be a very valuable item, one from a terrible time in Navaho history. The list inside the box included these items, but the dress and bracelet can’t be found. The young staff worker who unpacked the box is ill and then dies under mysterious circumstances. And Joe Leaphorn is given a warning that witchcraft is being used.

Officer Bernie Manuelito goes for a run and sees a dog waiting in the heat by a popular jogging trail. The dog is distressed, and Bernie soon finds the body of a dead man a little way off the trail. At first she thinks the man might have had a heart attack. But his hands are bound. His death is ruled a homicide and the FBI is called in. Bernie thinks the FBI is not telling her everything they know about the case.

Bernie and her husband, Sergeant Jim Chee, are investigating a string of burglaries in Chinle. Someone is breaking into older people’s homes and taking rare, valuable jewelry.

The cases dovetail in a surprising and dangerous sequence of events.

This is more than a police procedural set in the Southwest. The sense of place is remarkable. At one point Chee drives from Chinle to Canyon de Chelly. “Tséyi’, the place deep in the rocks, made his heart sing. Sacred country, a refuge, a quiet oasis … No matter how many times he saw the canyon’s buttes, spires, and mesas, they never failed to move him to a state of peace.” (p. 118). And Navaho culture is revealed throughout.