The Yogi: How to beat a traffic jam? Yoga

Home » Articles » The Yogi: How to beat a traffic jam? Yoga 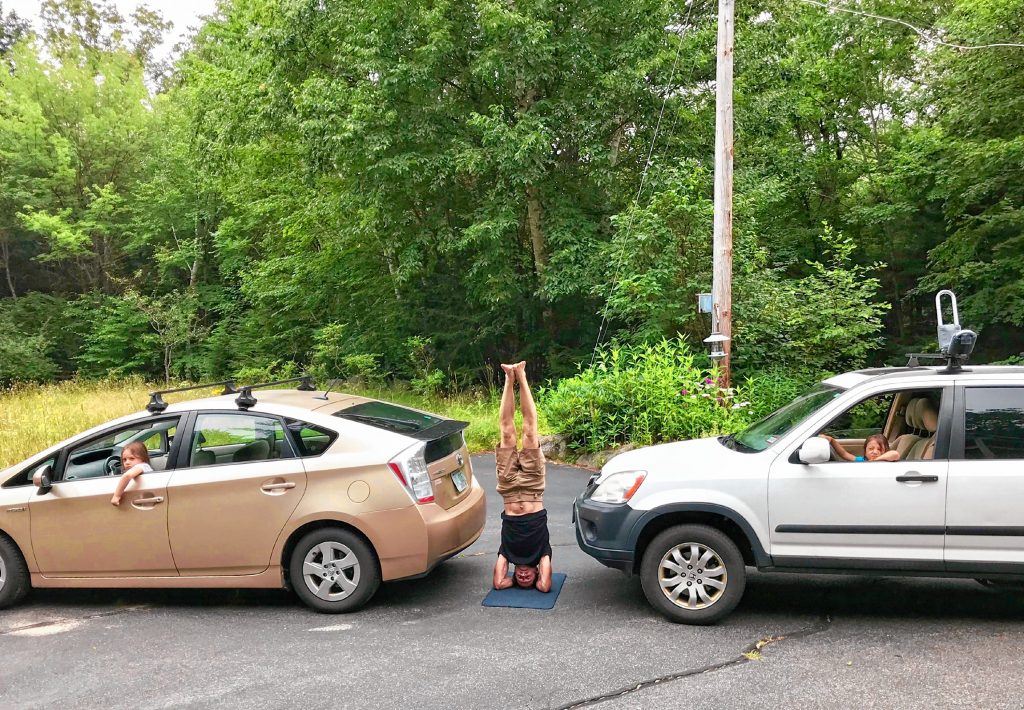 When life's got you in a traffic jam -- literal or metaphorical -- bust out the yoga mat and forget about it all for a little while. Courtesy of Mike Morris

I am sitting in traffic. It is a Sunday afternoon in August, and I made one wrong turn. Without thinking, I took the exit off of 393 onto 93 South. The masses (no pun intended) were heading home after another beautiful summer weekend in New Hampshire. It was a short-lived traffic jam, not even long enough to get through one at-bat of the Red Sox game on the radio. I only had to wait it out through one exit, and I was up on Loudon Road heading for Route 4, and listening to the call of Christian Vazquez’s home run. The Red Sox would go on to win that one, and I would turn my attention to another traffic jam, some 30 years before.

I had just ended a weekend visit to Kripalu, the Center for Yoga and Health in Stockbridge, Mass. It was my first visit, made with a small group of friends, one of whom taught yoga in Concord. Let’s just say it was an interesting weekend. There was no talking allowed at breakfast. There was no coffee. And the practice of yoga was new to me. Still after two days of no caffeine, little conversation and a lot of yoga, I was feeling pretty blissed out. Then we hit the Mass Pike on our Sunday afternoon trip home.

We sat in traffic.

There was no escape from this jam-up. We had 90 miles to go on I-90 before we hit Worcester. The blissed-out feeling of the weekend quickly turned to the reality that would soon be Monday morning. What’s a yogi to do?

It’s pretty easy to be a yogi when you’re in an ashram with like-minded folks. It’s pretty easy to be blissed out when everything (or everyone) is going your way. It’s also pretty easy when the traffic jam lasts for one exit. Throw a little curveball into your plans, or a stop sign in your path, and things can turn stressful pretty quickly. Yoga can’t stop a traffic jam from blocking your path, but it can give you tools to deal with them when they arise. The real traffic jam that needs clearing is the one between your ears. You’ve got somewhere to go, just like everyone else in that line. You’ve got reasons why your situation is a little more pressing than that person next to you. Still, your situation “is what it is.” What will you do with it? What thoughts will you choose when your path is blocked? I had some good company on that slow journey from Stockbridge to Concord, though the practice of yoga would take another couple of decades to take hold.

There is a third traffic jam that connects the one on 93 South and the one on the Mass Pike. It was in Las Vegas in the fall of 2009. I was on the way to the airport, and I had just completed my 500-hour training in the Bikram method of Hot Yoga. There was a big road race around Las Vegas that day, and the airport shuttle was going nowhere fast. I was sitting next to a man from Mumbai, India. We started up a conversation. He was in Vegas on business, and asked me what I was doing. I told him. He was surprised that I spent nine weeks in Las Vegas, and asked me how much this yoga training had cost me. I told him. “For that amount of money, you could go to India, study with master teachers, and live like a king for two years.” I can still remember the look on his face when he said it, something between disbelief and amusement. I told him that I wasn’t particularly interested in traveling to India or living like a king at this point in my life. My intention was to learn to teach this yoga that had become an integral part of my life, go back to my hometown and help other folks take control of their lives.

“That’s a lofty goal, ” he said. I told him I thought of it more as a beginning.

By the time the shuttle pulled in to the airport, we had talked about India, the Grand Canyon and even about Barry Manilow. He was a “Fanilow.” As we went our separate ways, I told him what a pleasure it had been to chat with him. He agreed and said: “Traffic is a lot like yoga. Roadblocks will always arise, whether on the highway or on the yoga mat. The only thing you can really control is how you react to things out of your control.”

I wrote that last sentence down in my notebook on the plane. Later I discovered it was attributed to the Buddha. I learned about it from a Mumbai businessman, stuck in traffic in the great yoga mecca known as Las Vegas.

See you in the hot room, my friends.