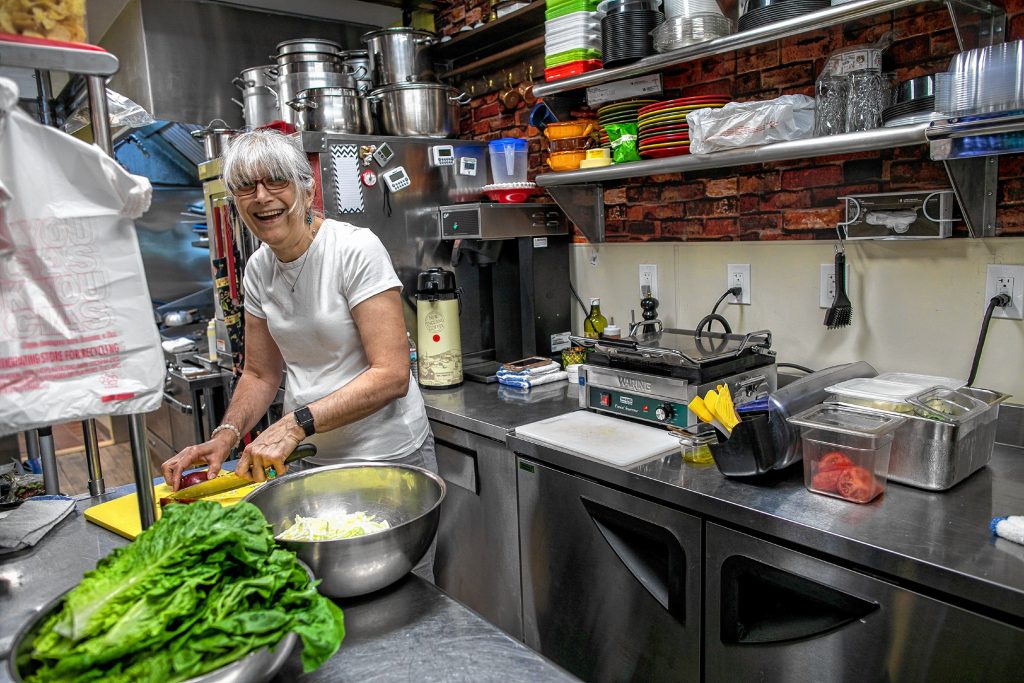 Nina Mujakobic, owner of Nina's Bistor and Sandwiches, cuts up some cabbage in the kitchen of the eatery that has replaced the The Sandwich Depot on Hall Street in Concord. GEOFF FORESTER 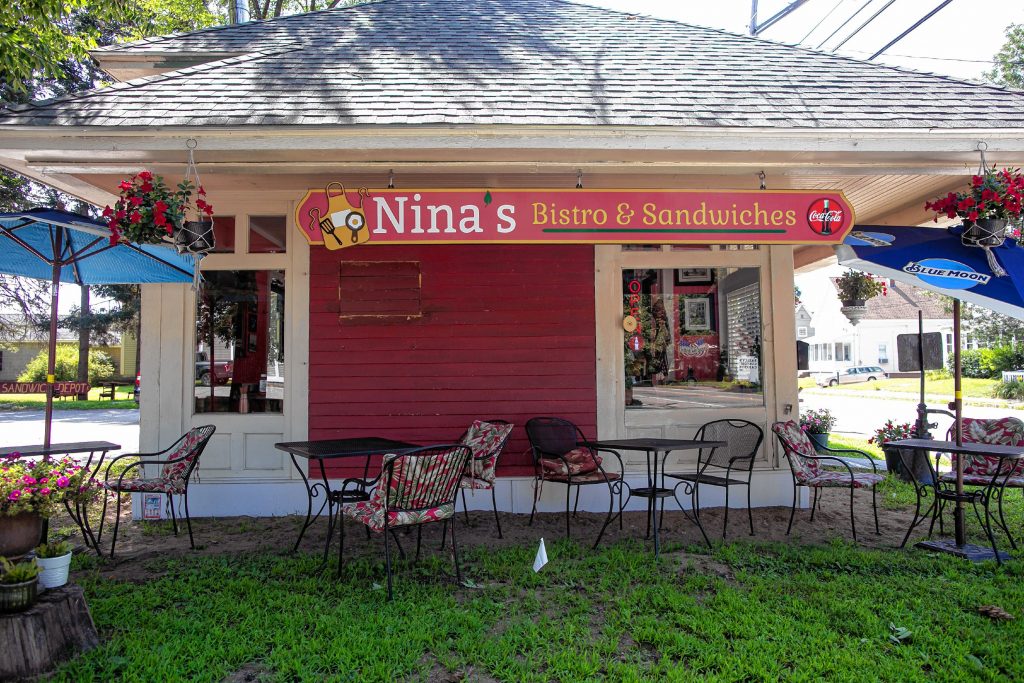 Nina's Bistro and Sandwiches on Hall Street in Concord took over from the Sandwich Depot. GEOFF FORESTER

There’s new life on the corner of Hall and Hammond streets.

Head inside the squat building that used to hold the Sandwich Depot and you’ll be greeted by coral-pink walls decorated with Mediterranean scenes and the business’s first few dollars. A display case offers sandwiches on marble rye, homemade American chop suey and mixed salads.

From the tiny kitchen half-open to the dining room, Emin and Nina Mujakobic sing out a greeting and encourage you to take a seat. Emin checks with Nina to see if the muffins in the display are blueberry; Nina carefully folds a spinach omelet into thirds on a bright-orange plate.

It was a sad day in Concord when the Depot closed in late 2017 after 28 years under the helm of Nancy and Gary Stewart. But the Mujakobics are stepping up to take the mantle with their newest restaurant, Nina’s Bistro & Sandwiches.

“It’s a big challenge to carry the good reputation of the Depot,” Nina Mujakobic said last Wednesday. “I know I’m going to earn your trust as much as Gary and Nancy did.”

Mujakobic said cooking has been a part of her life for as long as she can remember. She recalls her mother’s cooking from home fondly, before the Bosnian war in the 1990s drove her from her home in Yugoslavia.

She, Emin and their first son spent eight years in Germany as refugees. They worked in the hospitality field before making the jump to the United States. They settled in Manchester in 1998 and have been there ever since.

Mujakobic was a trained child psychologist in Europe and kept up her practice for a while in America, even working as a case manager for other refugees for a few years.

But after her twins were born, Mujakobic changed course. “I decided that’s going to be my new calling,” she said, “to be a mom and whatever else I like to do. Cooking was my second calling.”

Those who have been in Concord for a minute might remember the Crazy Goat Tavern on Main Street the Mujakobics opened in 2010 on the heels of the first Nina’s Bistro closing.

Eventually, the long days and late nights away from their family got to them. The Crazy Goat closed in 2018.

But Mujakobic loved the work and loved her customers, who she said have been following the updates on Nina’s Bistro closely on Facebook.

“It wasn’t easy, because it was our life,” she said. “When you’re in the industry, you get used to people, you start creating friends. I was timid about mentioning another plan because I didn’t want to disappoint anyone.”

Especially the Stewarts, who Mujakobic said her customers mention all the time. They kept a breakfast burrito in their honor, although the use of bruschetta instead of salsa gives it a slightly different kick.

So far, it seems like customers have welcomed the Mujakobics with open arms.

“It looks wonderful,” said Nancy Perkins, eating breakfast with her husband, David, Wednesday morning. “But what’s most important is the food.”

The Depot has a special place in the Perkins’ world. They had their first date there and have been married for 22 years. Once a week, they returned to where love struck for breakfast – and anticipate keeping that tradition up, Perkins said.

It doesn’t hurt that the Stewarts have given the Bistro their blessing, too.

“It was really difficult to walk in there the first time,” Nancy Stewart said. “It’s like maybe seeing your child go off and get married to be part of a new family.”

But Stewart said she liked the Mujakobics right away when they met to sell the building, and have remained close.

And Stewart said she felt something else when she walked in the door.

“It was so wonderful to see the same people we had such a close relationship with over the years,” she said. “They (the Mujakobics) are going to be fine. … They’re perfect for carrying on the tradition of a mom-and-pop person experience.”

Well-loved restaurants close, only for another to bring their own vision to life in the same location.

Businesses come and go. Major developments start as just a twinkle in someone’s eye – and then grow from plans to foundations to an opening day in the blink of an eye. Down the street, another building is being renovated, or destroyed, or becoming something else.

Beloved community members leave us. Individuals become known after they triumph, or fall, or speak their truth in a public forum.

Really knowing this place has meant keeping a mental catalog of who-knows-who and what-was-where over the years. You often can’t tell a story of Concord without going back at least a decade – and even then, a reader will often tell you that you’ve only got part of the story.

And that’s just for the “big” stories, the politics and institutions, the businesses and developments that shape the Capital City.

After almost three years at the Monitor and two years covering Concord, this is what this 27-year-old has learned: Keep the big picture in mind, but also the small stories and voices, too. They’re part of the rhythm that this city moves to.

By the time you read this, I’ll be on my way to cover state politics in Maine. Thank you for trusting me with your stories.