The Yogi: Two pools, 20 years and a whole lot of yoga

Home » Articles » The Yogi: Two pools, 20 years and a whole lot of yoga 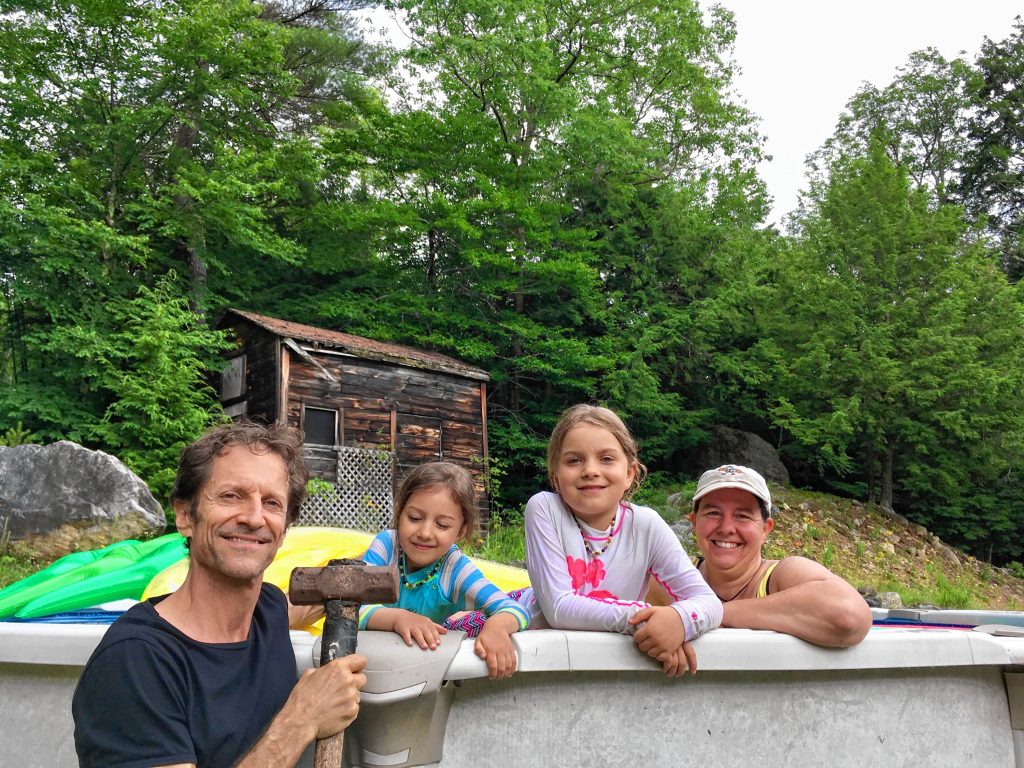 Mike Morris knows a thing or two about putting pools together -- and his family gets to reap the benefits! Courtesy of Mike Morris

In 2001, a young couple bought their first house. The house, in Strafford, sat on a lovely pile of rocks, and came with a little piece of forest. At the edge of the forest, near the house, was an above-ground swimming pool. The couple decided that tending a swimming pool was not in their plans, and set to the task of taking it apart. What seemed like a simple project soon grew to a monster of a challenge. Screws and bolts would not yield, aluminum crumpled and crashed, and the dismantling was something of a disaster. The man grew increasingly frustrated, and though the space was soon clear, the mess of metal and plastic that was left looked nothing like a swimming pool. The woman looked on as the man hurled a few choice epithets toward the forest. She calmly watched as he used his sledgehammer to destroy the few final pieces of pool that remained.

“That’s enough,” thought the man. “I’m going to yoga class.” He returned a couple of hours later, refreshed, but the monster that had taken the form of the swimming pool remained in the back of his mind. The mess that was the old pool was hauled away, and the couple moved on to turning their house into a home.

Over the next 18 years, the pool was forgotten. Two golden retrievers livened up the house. The couple got married. They had a daughter. Then another daughter. They built trails in the woods, tended gardens and played music in the house. And then, almost out of nowhere, a second pool arrived. It was June of 2019. This above-ground pool was much like the first, and was a gift from one of the man’s students. The couple went to the house in Concord where the pool lived, and disassembled it. The process went much better than the disaster of 2001. The man had no access to a sledgehammer, and kept his mouth closed. The woman labeled each piece, took careful steps to organize the project, loaded the parts, and together they transported the pool to Strafford.

The second pool went in the same spot as the first. The land was re-leveled, sand was shoveled and the two of them dove into the task of reassembling. It quickly turned to “something of a disaster.” The man’s darkness returned, and though the sledgehammer stayed in the shed, the epithets were hurled into the forest.

Then, something happened. The man’s thoughts turned to that event of 18 years past. He thought about what he’d learned, which wasn’t much. He was no better at building pools in 2019 than he was in 2001. He’d had no practice. What he had practiced was noticing his thoughts. It happened slowly, and he realized it as one of the gifts of his yoga practice. He was not better at building pools. He was better at choosing good thoughts over bad ones.

The woman already knew the power of thoughts. She knew that the seeds of our success or failure are sown in our thoughts. Things will not always go your way. Pool walls will fall down. A visit to a yoga class may seem like putting up the pieces of a pool. Yoga postures will challenge your balance, your strength and your beliefs that they can ever be accomplished. When those challenges arise, it is important to notice what kind of thoughts you choose to put in your mind. It is what we call in yoga “planting seeds.” The kind of seeds you plant, the kind of thoughts you practice, are what matter most. Plant good seeds, and they will grow.

“Planting seeds” is known by many names: resiliency, grit, stick-to-itiveness, faith. The couple in the story and their two children prefer to call it “magic.” How you are on your mat is how you are in your life. And when you start a yoga practice, it is new, and different, and probably uncomfortable. It is a new way of using your body, and your breath, to be sure. And no matter how a class goes that first time, or some 18 years later, we are always practicing our thoughts. We are always “planting the seeds.”

How does the story end? The pool pieces remained in a heap for a few days. The woman made a call for reinforcements. The man practiced his yoga each morning to practice “planting the seeds.” On a sunny day in June, the reinforcements arrived. Some, like the man, held up the walls of the pool. Others, like the woman, directed the work and got their knees and knuckles dirty. Some took photos, or made sandwiches, turned screws or tightened bolts. By the end of the day, nearly 18 years later, a second pool was standing in the same spot as its predecessor.

They all went for a swim. After a quick yoga class, of course.

Keep “planting your seeds,” my friends.