Field Trip: For the most fun you can have in Chichester, hit up Chuckster’s

Home » Articles » Field Trip: For the most fun you can have in Chichester, hit up Chuckster’s 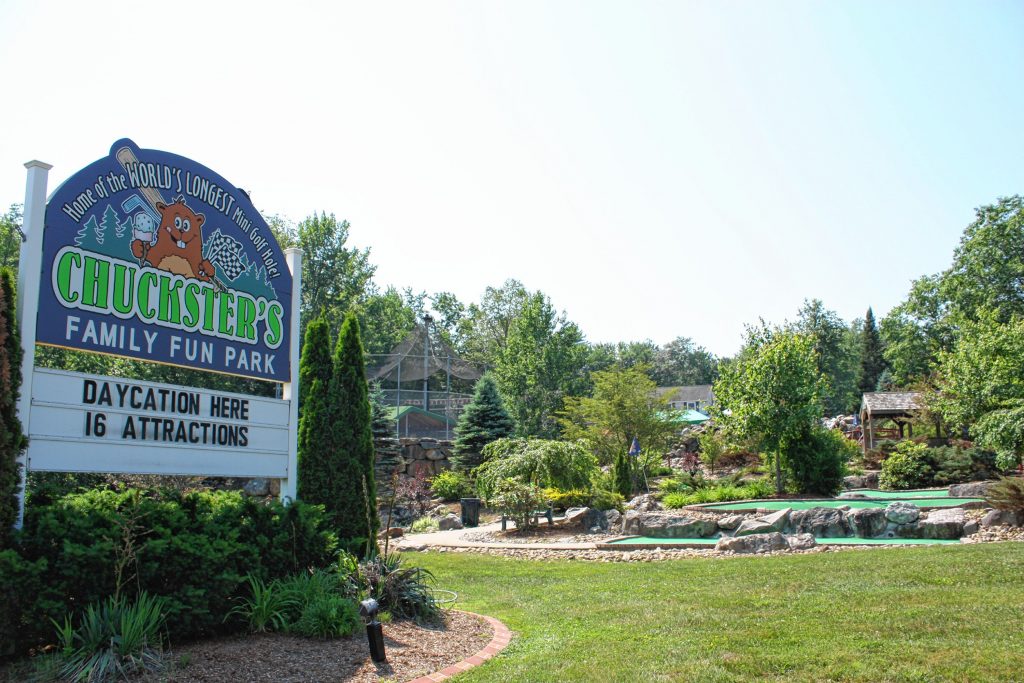 Chuckster's in Chichester is home to mini golf, batting cages, go karts, a rock-climbing wall, a zip line, paddle boats, games and all kinds of other fun stuff for the whole family. JON BODELL / Insider staff 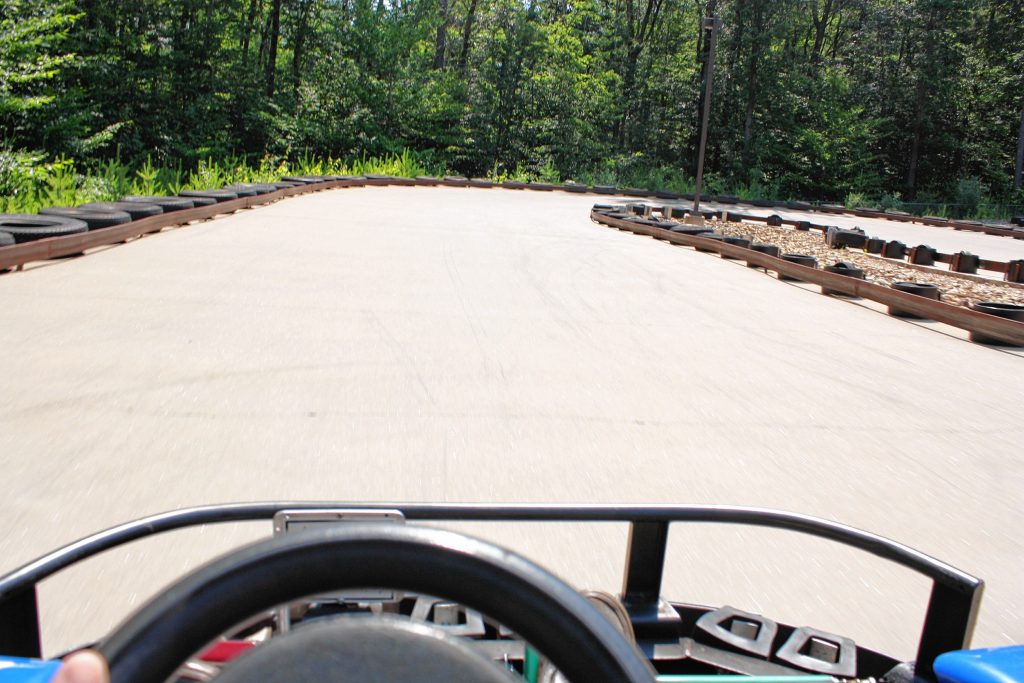 Here's my view from behind the wheel of a go kart at Chuckster's. Notice how there's nobody in front of me? JON BODELL / Insider staff 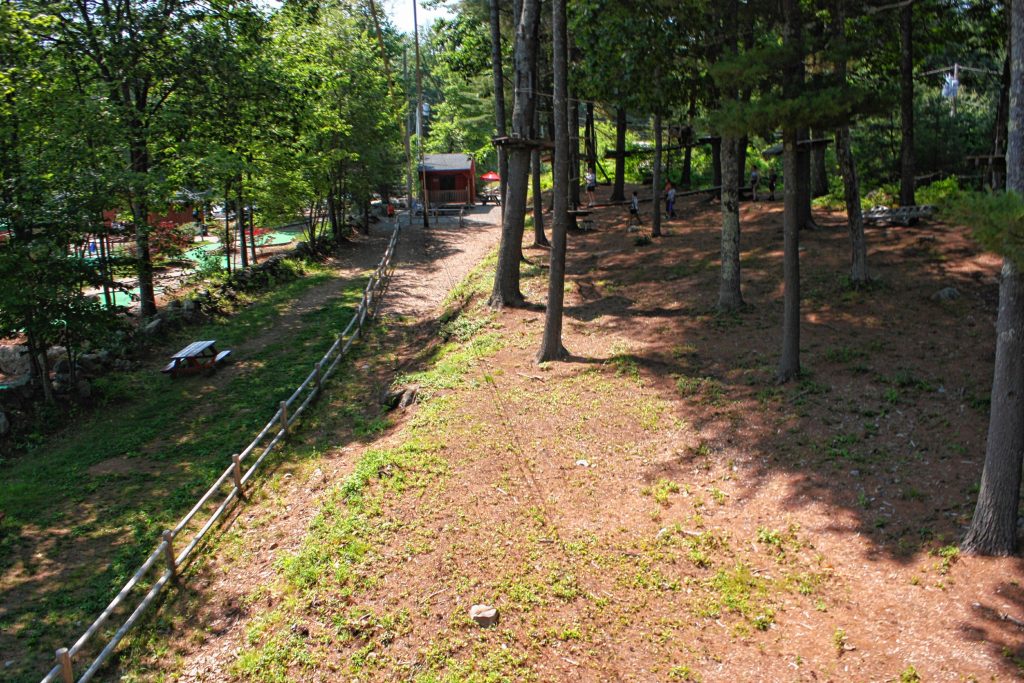 Here's how the world looks as you're zipping down the zip line at Chuckster's. JON BODELL / Insider staff 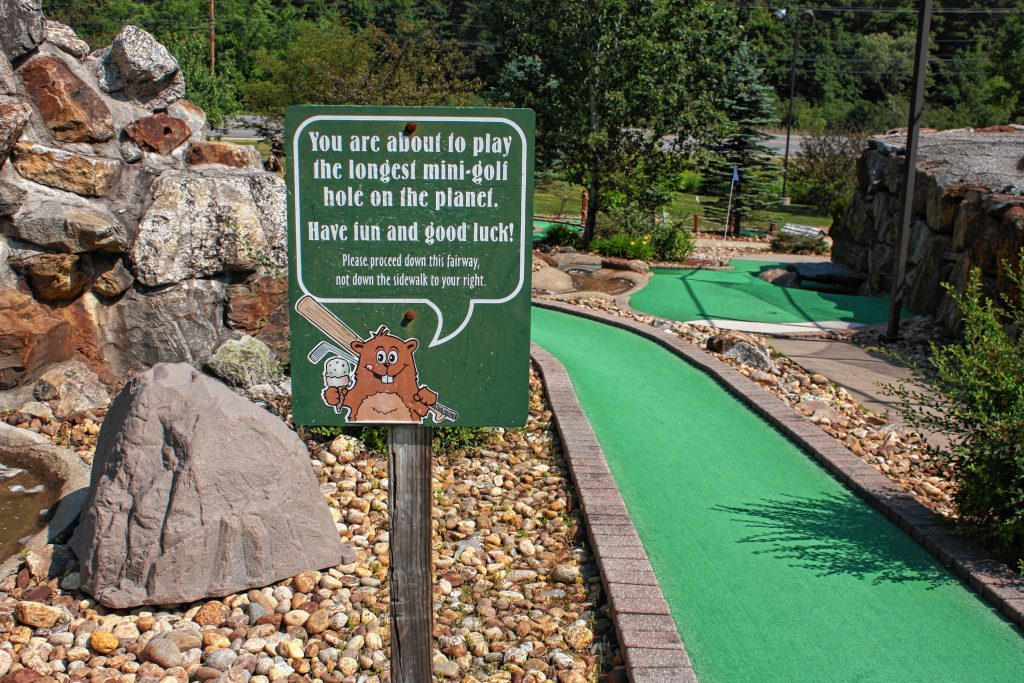 Chuckster's lays claim to having the longest mini golf hole in the world, with a couple of qualifiers. First, there are three Chuckster's locations in total, and each one of them is the same 201 feet in length, so it's technically a three-way tie with all the Chuckster's. The other thing is that these are all the longest mini golf holes in which it is possible to get a hole in one. I shot a 5 on this one. JON BODELL / Insider staff 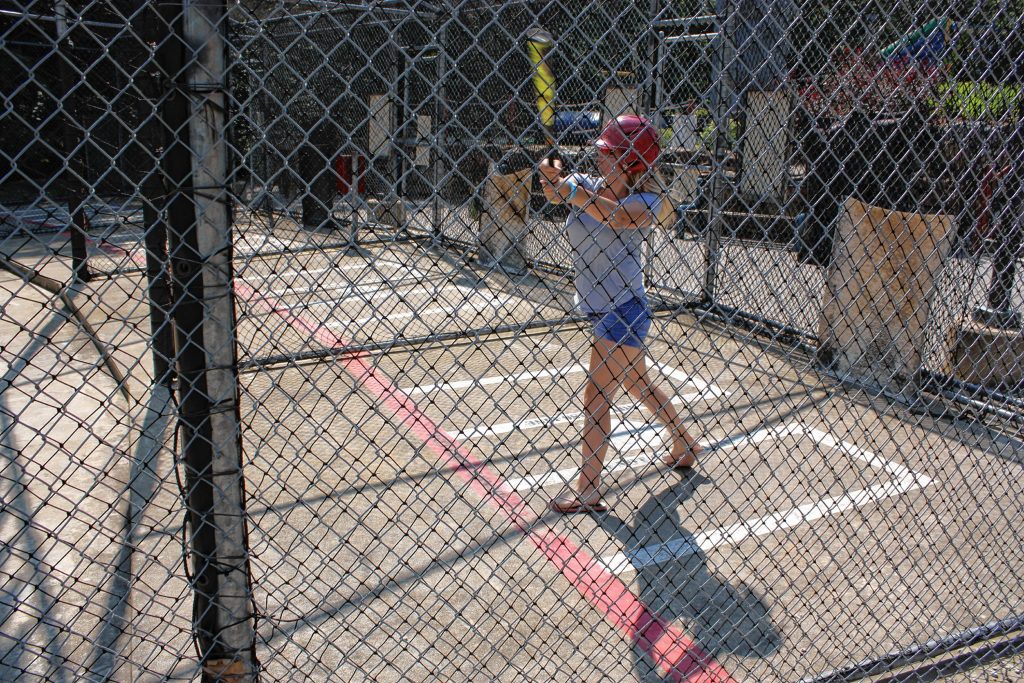 Jasmine VanSpanje was lacing liners all over the place in the batting cage at Chuckster's last week. JON BODELL / Insider staff

Welcome to the Insider’s Field Trip to Chichester and Epsom. These two towns are nice and close to the capital city, and while neither community would exactly be classified as a hotbed of activity, there’s plenty to do, see and try, if you’re so inclined.

For this particular Field Trip issue, we’ve broken it up into three categories – For Fun (the one you’re reading now), To Eat and Shopping & Services. Since these towns don’t have quite as many places to check out as some of the other places we’ve visited, we’ve eschewed the all-purpose, general intro story that usually accompanies these Field Trips. Instead, we’re jumping right in with our visit to perhaps the most popular destination for fun-seeking families in Chichester – Chuckster’s.

Astute readers will recall the Insider’s visit to Chuckster’s in Hooksett for our regional golf issue in May of 2018. That was back in the good ol’ days, when we had a two-man staff. That trip was a lot of fun, but the Hooksett location offers nothing but mini golf. The Chichester location, which was around before the Hooksett one, has a whole lot more.

If you remember our feature at Chuckster’s in Hooksett, we tried out the famous “longest mini-golf hole on the planet,” something all three Chuckster’s locations lay claim to (the third location is in Vestal, N.Y., and all three locations have a 201-foot hole that claims to be the longest on earth). Therefore, it was only right that we try the Chichester version, too.

If you’ve tried the one in Hooksett, the first difference you’ll notice about Chichester’s longest hole is that you don’t need to climb a fire tower to start. This one begins at ground level, but that doesn’t mean it’s any easier. This 201-foot behemoth of a mini-golf hole is a winding track that runs downhill, terminating with a circular putting area at the bottom with a mini covered bridge coming in from a water passage. You can’t actually see the hole from the spot you putt from, so the goal is to just get it as far down the hill as you can.

I sent one hard down the middle, but after catching some brick along the sides, my ball ended up hung up a little more than halfway to the bottom. My next shot got it close to the hole, and I figured I’d get out of there with a 3. However, I botched a very easy 6-footer, then rushed through an even easier 4-footer and settled for a 5. Not too impressive.

Jan Kearney, the manager on duty last Wednesday, shared a little secret with us: the easiest way of sinking a hole in one on this one – hole 13, by the way – is to intentionally go off the course, through a small opening in the brick perimeter and into the shallow stream, about a third of the way down the track. This stream ends at that covered bridge, which spills right out into the hole. As easy as it sounds, there is still no direct path from the spot you start from to this narrow opening, so easy is a relative term here. Needless to say, the hole is great fun and is sure to be a challenge for even the most serious of mini-golfers.

Once that was out of the way, I moved on to the go-kart track, where I felt more confident. There were only three others in line, so I knew I had a good chance at winning (granted, the oldest person in line was probably 12, but still!).

I started as the last kart in line, and I got off to a slow start – these pedals require a bit more pressure to get going than I was expecting, so I spent the first second or two just sitting there, not pressing the accelerator hard enough. Once I got it to go, I was shocked at how slow all the karts were going – it was a gentle walking pace. But after about 5 seconds, all of the karts took off at once. There must be an electric limiter in place at the beginning of every race to make sure all the cars get out of the starting grid okay.

Then we were off. I was far behind the leader on the first lap, but after some sharp cornering, kissing the perimeter of the track with the edges of my kart, I moved out front and never looked back. In the end, I led for 9 of 10 laps (no big deal), and finished probably 5 or 6 seconds ahead of the second-place car. Those poor kids! But hey, I wasn’t there to lose.

After that victory, it was on to the TimberTrek Aerial Adventure Park, which has a zip line at the end of it. The TimberTrek park is an obstacle course set up high in the trees. A special safety harness keeps you from plummeting to your death (hopefully) and allows you to act like a ninja warrior up there. It’s all about fun, but strength, athleticism and experience all come into play with a course like this. There are also a few different paths you can take, which vary in difficulty. At the end of all three paths is a zip line that takes you back down to the start of the course.

Having never done anything like this before, I decided – for my own safety and for the sake of the Insider’s insurance supplier – to skip the TimberTrek course and go straight for the zip line. While it’s apparently only about 35 feet off the ground, it feels much higher than that once you get up there, which requires climbing a long rope ladder to get to.

This ascent is actually a bit tricky – you wear a safety harness with two clips hooked on to a line above you, and every so often there’s a big metal joiner in the overhead line, requiring you to unhook your safety clips one at a time and then rehook them on the other side of the joiner. If nothing else, it gets you ready for the big trip at the top.

From the platform at the top, you can see pretty much the whole park – as well as several large, protruding boulders directly below. You definitely want to make sure you’ve followed all the safety instructions and securely fastened yourself to the safety lines before venturing out to the edge of the platform. A fall from this height would be devastating.

Once I put the fear aside, I hooked in to the lines, sat myself down in my harness and pushed off the platform, putting all my faith in the harness system. The ride was fast and exciting, and I only had time to fire off one photo (luckily it didn’t come out blurry!), but I made it count. There was a brief moment of worry as I was spun around 180 degrees about halfway through, meaning I did the second half of the ride in reverse. Because of this backward orientation, I bungled up the landing and instead of coming to a graceful stop on my feet facing forward, it was more of a scrape-the-ground-with-the-back-of-my-heels-and-pants kind of deal. No matter – it was a blast, and the awkward landing didn’t hurt at all (except for my pride).

After shooting a disappointing 5 on the longest mini-golf hole on the planet, dominating a bunch of children on the go kart track and thoroughly embarrassing myself on the zip line, I decided it was probably time to take a break from all the trying of stuff. Plus, I’d only been there about 20 minutes at this point and I was already a revolting, sweaty mess – and I still had several more appointments that day. Note to self: if you want to attempt to hit up every attraction at Chuckster’s, either don’t go on a 90-degree day or don’t go right before you have several other important work meetings.

After using a handful of paper towels to make myself somewhat more respectable-looking (probably to no avail), I strolled across the mini-golf course to check out the batting cages. Inside was a young woman named Jasmine VanSpanje, who was ripping liners all over the place in there.

The cages offer four baseball and four softball pitching machines, with various speeds. A token gets you 15 pitches, and tokens get cheaper the more you buy (one costs $1.50 but you can get 20 for $20). The fun part is when you see Chuckster, the giant woodchuck mascot, pop up from the center of the arena. If you can knock Chuckster off his spot, you win a prize.

There were several other attractions I checked out but wasn’t able to really enjoy by myself. For instance, there’s a game called Shoot Four that would have been perfect in the old, two-person Insider regime. The game is just like Connect Four, only instead of little checkers being plopped into a plastic board, you get mini basketballs that you shoot into an inflatable grid just like the Connect Four one.

In the same area of the park is another basketball-themed attraction called Aeroball. This one features two trampolines right next to each other, each one surrounded by netting, with hoops near the top behind each trampoline. One person takes each trampoline and tries to bounce high enough to throw it into their opponent’s basket. Of course, the opponent can jump, too, and can block your shot if you’re not careful.

I also missed out on ShootNShower, yet another basketball game, and one that would have been perfect for this sweltering day. ShootNShower has two basketball hoops back to back, with one person on each end shooting hoops. At the end of the round, whoever has the worst score gets a big blast of water from a spray jet overhead. On a day like this, I would have loved to have lost this competition.

Ultimately, the park is so big and I only had so much time, so I didn’t get to check out things like Jumpster, Light Battle, Volley Battle and others, but you can learn all about the rest of the attractions, as well as prices and hours, at chuckstersnh.com.