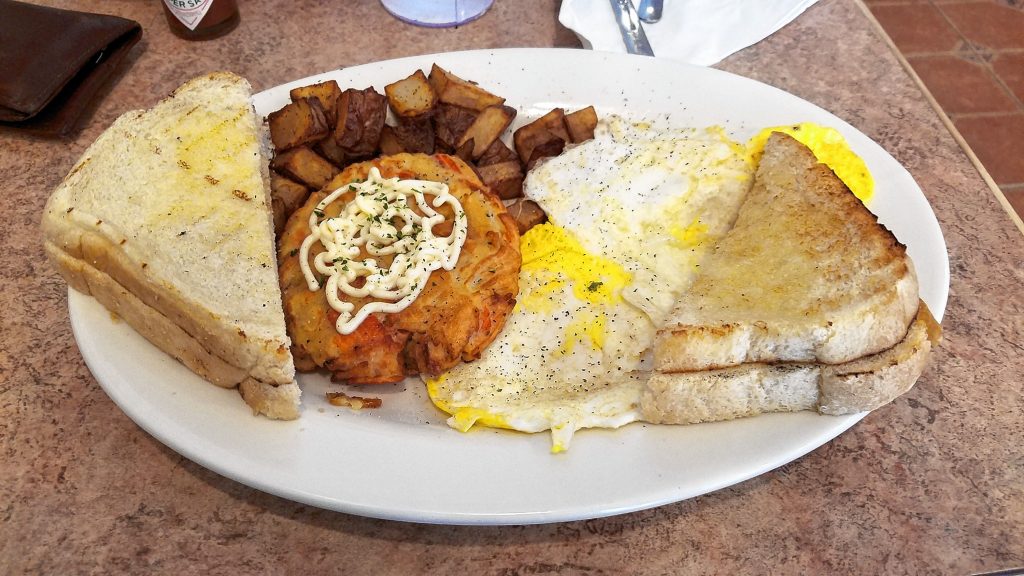 It’s been a nice couple months for the Concord food scene – and therefore, for the Food Snob.

In April, Federal’s Café opened up across the street from the federal courthouse on Pleasant Street. Now, in the heart of downtown, there’s a new place with a familiar name: The Post.

Taking over the space formerly occupied by Gyro House at 58 N. Main St., The Post is a “sister” restaurant to The Newell Post on Fisherville Road (is that Penacook or Concord?). It’s basically a slightly smaller version of The Newell Post, and its location right downtown makes it a highly attractive little eatery.

The place does breakfast and lunch, serving breakfast all day, and they also bake their own bread and other goods right there in the restaurant. We stopped in last week for a late breakfast some time around 11 a.m.

Having been to The Newell Post several times and having enjoyed their corned beef hash, we wanted to try something completely different at the new location. We liked the sound of pretty much everything on the “specialties” section of the breakfast menu, but ultimately settled on the Carolina Crab Cake, a breakfast plate consisting of a homemade crab cake topped with a rémoulade sauce, two eggs, a breakfast side and some homemade toast. For the options, we got home fries as the side and sourdough bread for the toast, with the eggs cooked over hard.

Despite it being moderately busy in there, the service was quick and friendly – it couldn’t have been 10 minutes from the time I ordered until it came out.

The first bite of the crab cake was very good, and surprisingly so. This cake had big, solid chunks of crabmeat in there instead of being all ground up and indistinguishable. That said, this Food Snob does believe it was imitation crabmeat and not the real thing, evidenced by that signature red-orange coloring on the outside. Even still, it had the right flavor, and there was plenty of it to go around. The sauce was more or less a light tartar sauce, which went very well with the crab cake.

The home fries were good and crispy, the result of being deep-fried (just the way they ought to be). The eggs were cooked just how we asked them to be, though there’s not much else to say about a couple of fried eggs. The toast, sourdough made right there, was also very hearty and tasty, if a little mild.

Getting back to the crab cake, though – this might not be for every palate. While this particular Food Snob is a big fan of crab cakes, and all seafood in general, some snobbier food snobs (note the lower case) may not jump at these particular cakes. This cake was a bit on the softer side through the middle, which may have had something to do with the use of those soft imitation crab pieces. It also had less of an ocean taste, perhaps due to a lack of natural sea salt in the meat. In any event, if you like your crab cakes on the crispier side, you might want to order yours extra crispy.

All in all, this was an enjoyable – and affordable ($10.99) – crab cake breakfast. Check out The Post at postrestaurantnh.com.