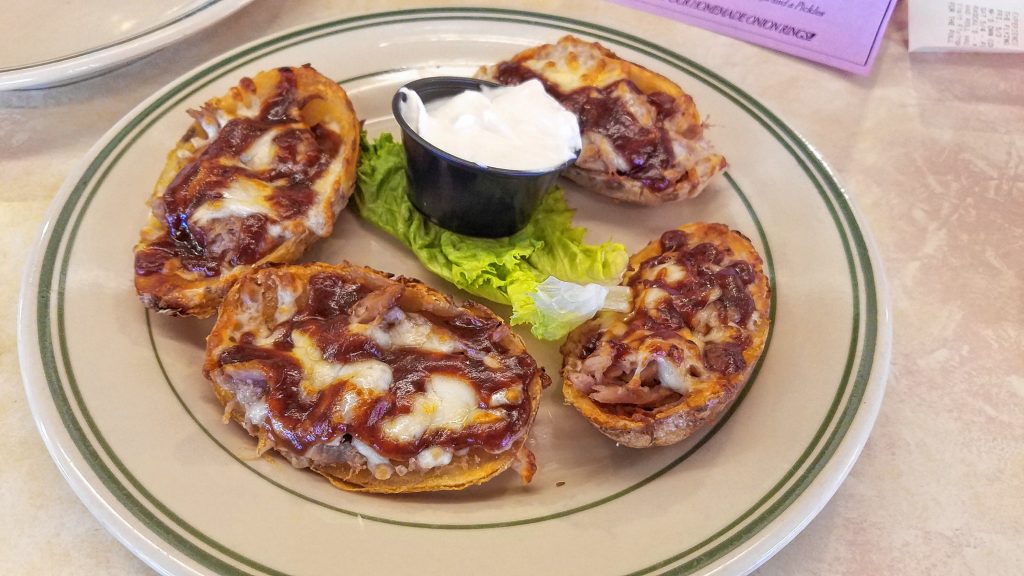 If there’s one truth in life, it’s that the skin is often the best part. Whether we’re talking turkey, fried chicken, grilled trout or anything else that has skin, there’s something about a thin, crispy outer layer that just hits the spot.

This is rarely more true than with potatoes. While potatoes are pretty great in virtually any style of preparation, it’s hard to do better than loading up some skins with cheese, meat and whatever other toppings you like.

During our trip through Tilton/Northfield, we made a stop at the famous Tilt’n Diner, right there off Exit 20. The diner is part of the Common Man family of restaurants, the diner division, if you will (along with Tilt’n Diner, the “family” also contains Airport Diner in Manchester and The 104 Diner in New Hampton).

We had already eaten a bunch of wings at Kettlehead before arriving at Tilt’n Diner, so we were looking for something small and quick. The Pulled Pork Diner Skins sounded perfect, so we ordered a plate of those.

In short order, a plate of four loaded skins came out, emitting a robust smoky aroma that smelled just like a backyard barbecue. They looked beautiful, too, drizzled in dark barbecue sauce and baked to a golden brown on the outside.

The first bite was pretty hot, temperature-wise, and very smoky. These skins were not only drizzled with sauce, but there was a strong smoky flavor that was perfect for pulled pork.

The pork itself was super tender and loaded with flavor. The portions of pork per skin were rather modest, but that was okay in this instance, having been kind of full to begin with.

While silverware was provided, these were great to eat as finger food. The crisp, clean outer skin provided a natural place to hold these snacks without getting grease or cheese all over ourselves.

We skipped the sour cream entirely, feeling that it would weaken the smoky barbecue flavor provided by the sauce. There was also the chance that scooping gobs of cream onto these skins would make them go soggy, so we had them straight up, and they were great that way.

Ultimately, if you’re looking for something savory and smoky, with a crisp outer shell, something you can put down quickly, give the Pulled Pork Diner Skins a try.