Don’t feel like traveling for Maple Weekend? You don’t have to

Home » Articles » Don’t feel like traveling for Maple Weekend? You don’t have to 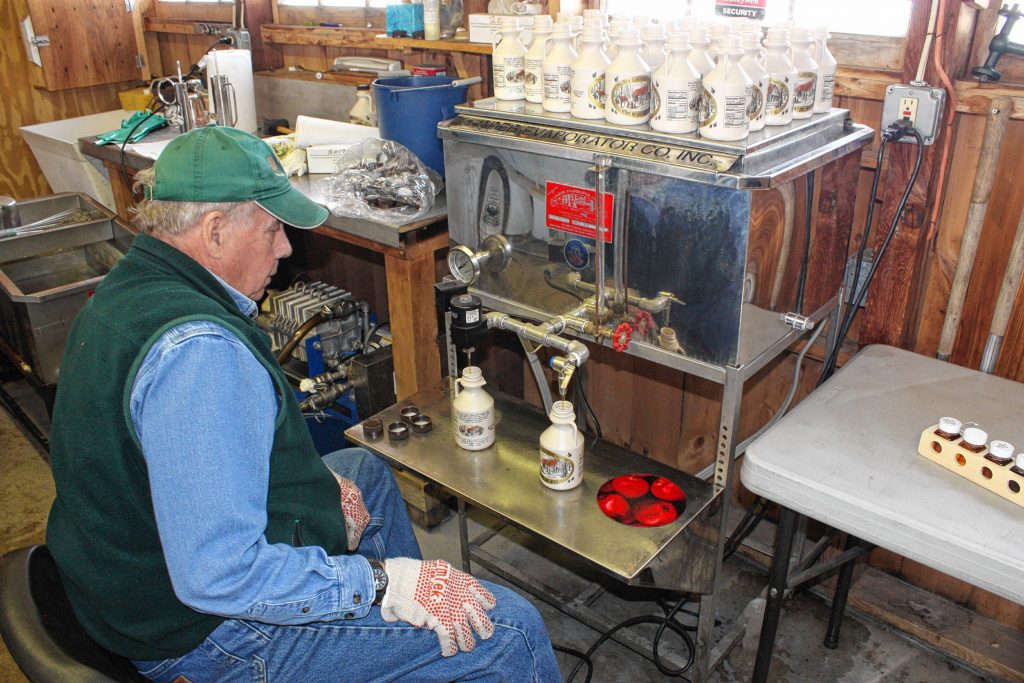 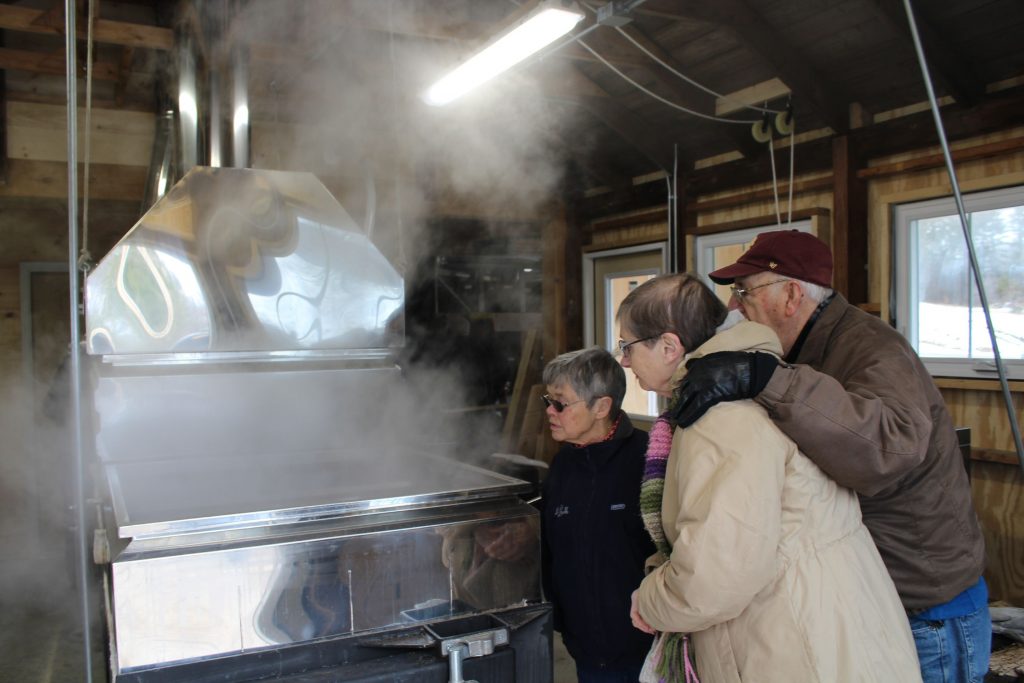 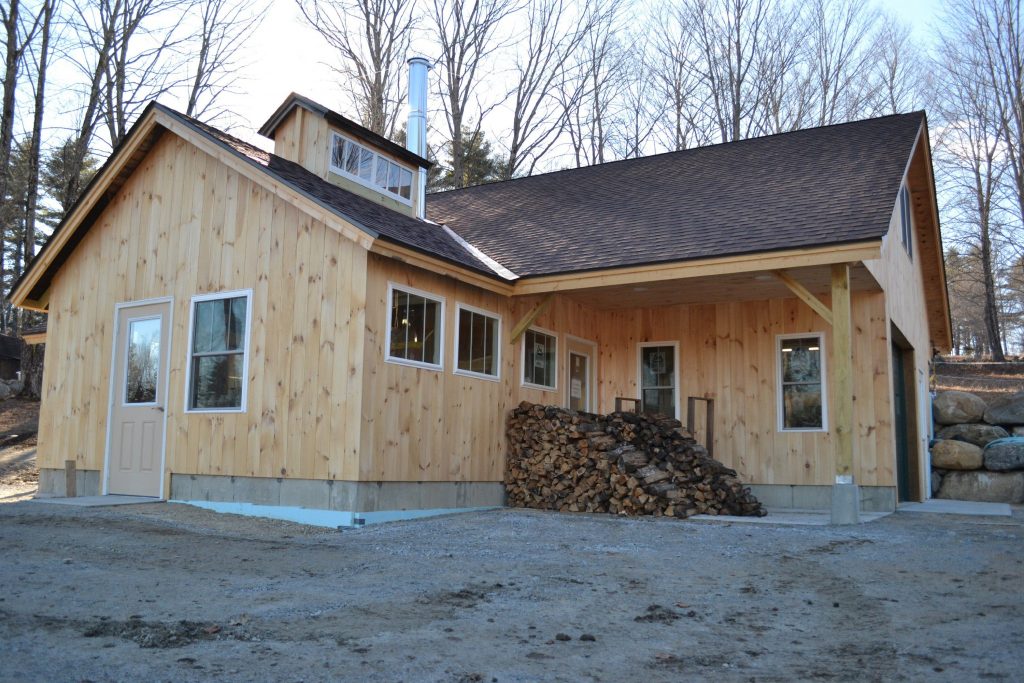 The new sugarhouse at Mapletree Farm is looking really nice – and will be ready to show off during Maple Weekend. TIM GOODWIN / Insider staff 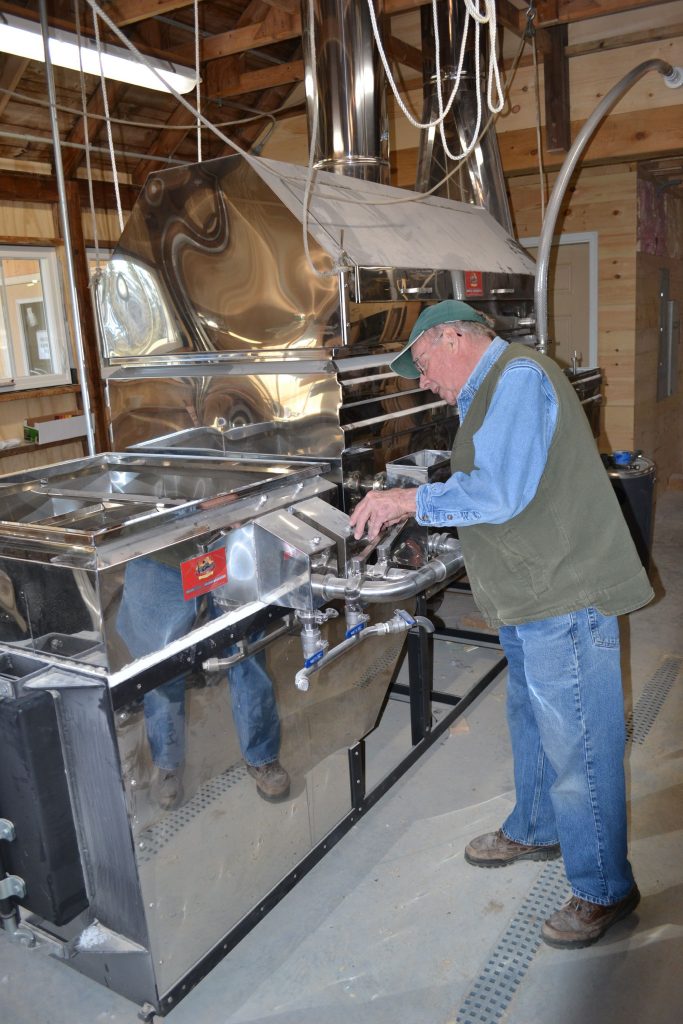 Mapletree Farm owner Dean Wilber installs a thermometer in the new evaporator that is the star of the show in his newly expanded sugarhouse. TIM GOODWIN / Insider staff 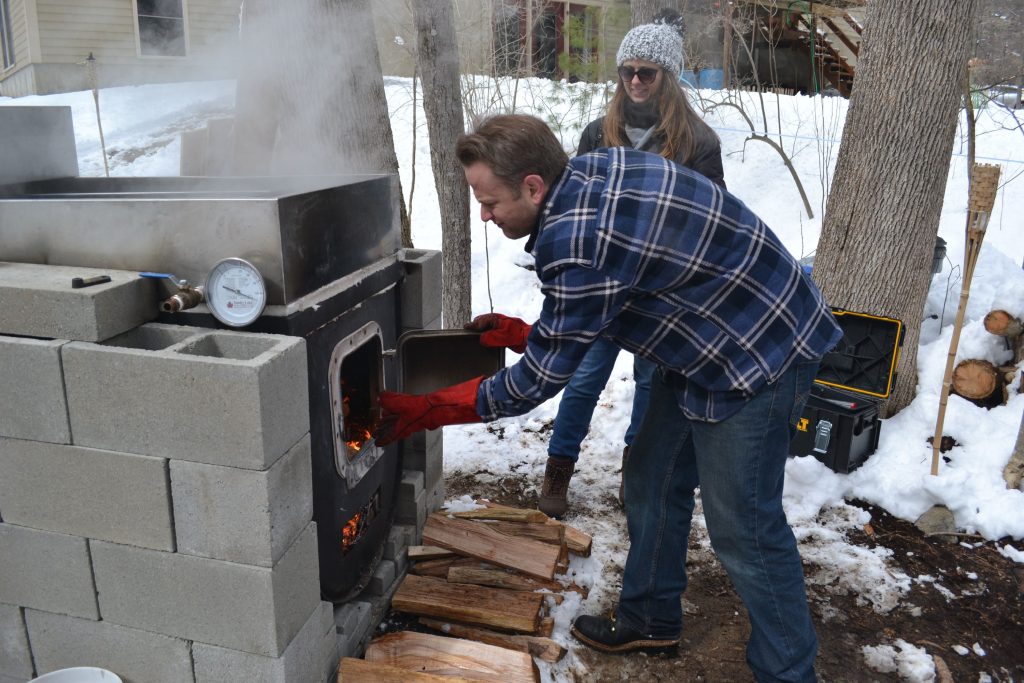 Andrew Mattiace tends to the fire while boiling his fourth batch of maple syrup on Saturday, while his girlfriend Wendy Zona looks on. TIM GOODWIN / Insider staff 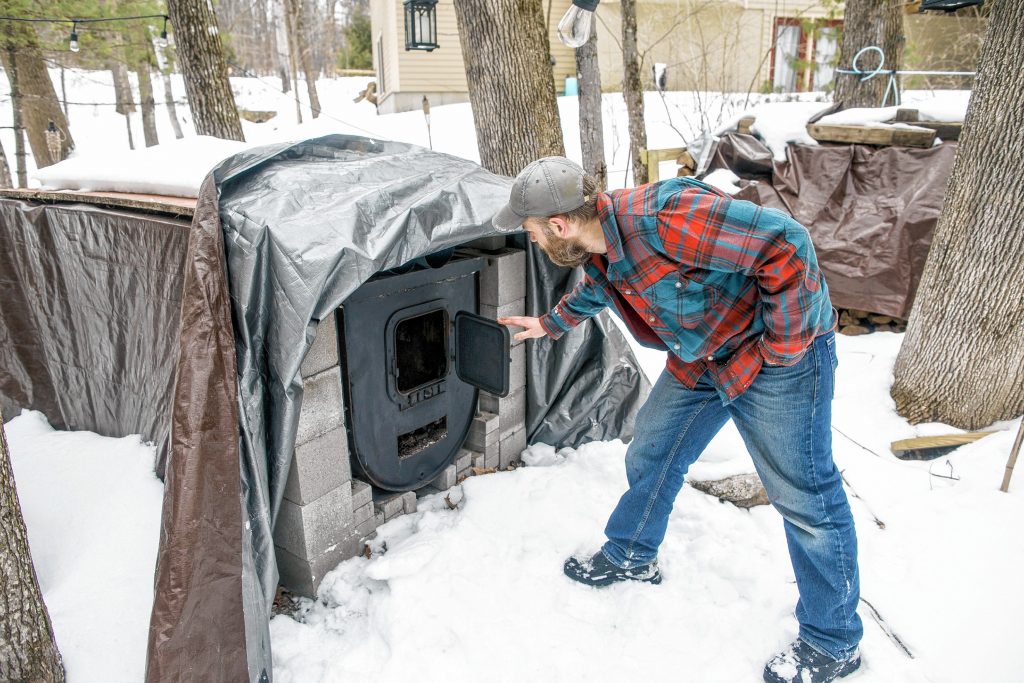 Andrew Mattiace opens up the converted oil tank he created for the burner of his evaportation process for sap in the back of his Bow home on Saturday, March 2, 2019. GEOFF FORESTER 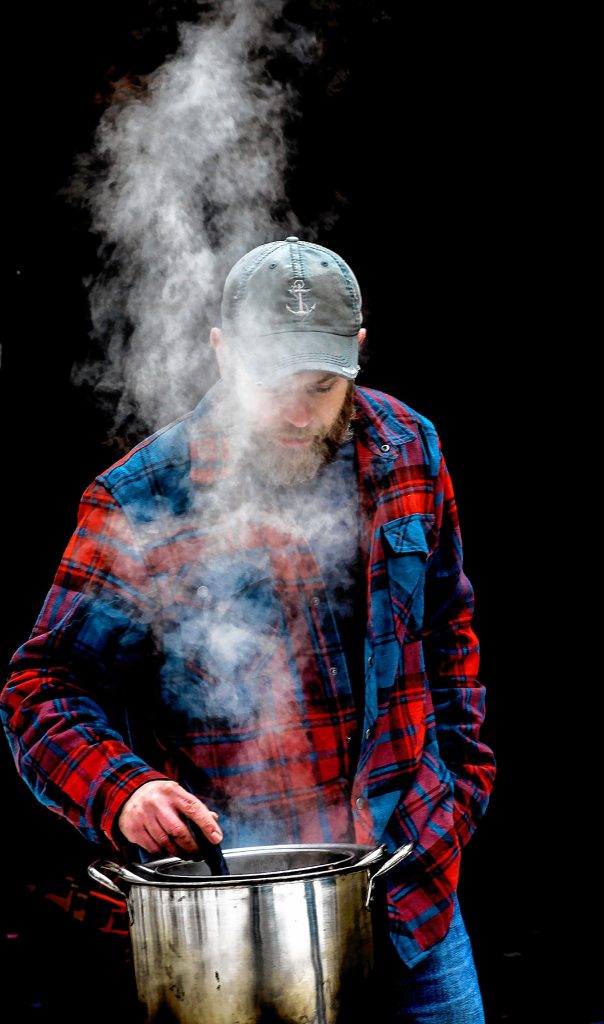 Andrew Mattiace checks on the evaporation process for a custom syrup operation at his Bow home on Saturday, March 2, 2019. GEOFF FORESTER 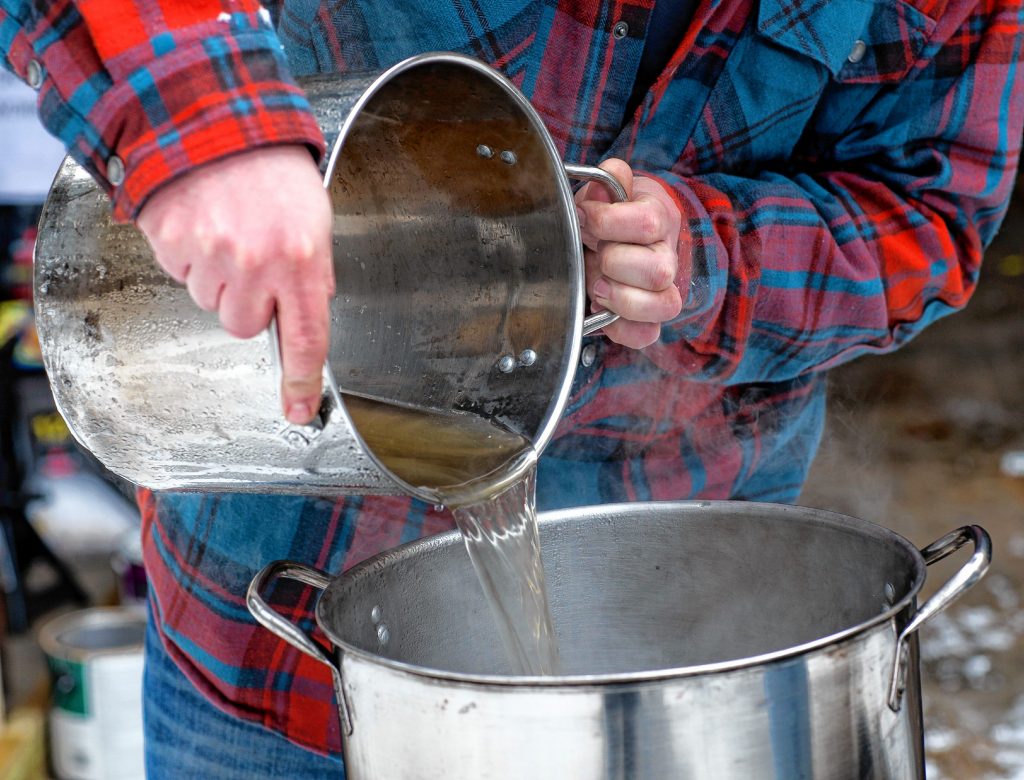 Andrew Mattiace pours out some sap for his syruping operation at his Bow home on Saturday, March 2, 2019. GEOFF FORESTER

Hardcore New Englanders and pancake lovers have longed to hear it – maple season is finally here.

Hosted by the New Hampshire Maple Producers Association, March is Maple Sugaring Month, and this upcoming weekend is Maple Weekend, when dozens upon dozens of maple operations all over the Granite State – from commercial size to hobby size – open up their sugar shacks to let visitors in and check out the process. This is always a family-fun weekend steeped in New Hampshire’s long history of producing all kinds of things from maple sap.

During Maple Weekend, sugarhouses throughout the state will be offering tours, demonstrations, tutorials, samples, meals (in some cases) and more. It’s also a chance for visitors to ask any questions they might have about the process of turning clear, runny sap into dark, gooey, deliciously sweet syrup.

While there are nearly 100 sugarhouses in the Granite State taking part in the festivities this year, you don’t necessarily have to travel all that far to get in on the sticky action. In fact, you don’t even have to leave town, regardless of where you’re reading this (in hard-copy form only, of course).

In Concord, you can check out Mapletree Farm on Oak Hill Road, an operation that’s been running since 1975. For owner Dean Wilber, this will be the 44th season that Mapletree Farm is participating in Maple Weekend, and he personally has been harvesting maple sugar for 71 years. Suffice it to say, this guy knows a little bit about sap and what to do with it.

Since Mapletree Farm has been around so long, there’s a decent chance you’ve probably been there before. But if you haven’t been in a few years, it’s worth going back to check out the new upgrades. Last year, Wilber completed a 22-by-40-foot addition to the original 16-by-20-foot shack that was built shortly after the business opened in 1975. The brand-new building greatly expands Wilber’s production capabilities, as well as enhances the experience for visitors.

During Maple Weekend, Mapletree Farm will be in full swing. The evaporator will be running, steam will be flowing and the sweet, unmistakable aroma of boiling sap will fill the air. Walking tours through the maple orchard will be offered, as will free samples – look for the classic treat of maple sugar on snow, as well as maple cream, maple sugar crystals and, of course, syrup. You might even get a chance to see the cotton candy machine spin up some maple cotton candy.

Mapletree Farm is located at 105 Oak Hill Road and will be open from 10 a.m. to 4 p.m. this Saturday and Sunday for Maple Weekend. For more info, go to mapletreefarmnh.com.

In Bow, there’s a much younger operation starting to come into its own. Andrew Mattiace started Beaver Brook Maple last year, and he looks to keep things going this year. Beaver Brook Maple is a small, hobby-scale operation based at Mattiace’s home in Bow. An engineer by trade, he built his own outdoor evaporator (most are indoors) out of a converted oil tank.

Like Mapletree Farm, Beaver Brook has also expanded since last year. Mattiace now has 230 taps between his own property and that of a neighbor that gave him permission to tap trees this year. That more than doubles the size of his operation from the year before, when he had just 80 taps.

For Maple Weekend, Mattiace doesn’t have any huge, orchestrated plans. He started this business for fun more than anything else – he was mostly selling to friends and family last year. As such, the Maple Weekend agenda will be as casual as Mattiace and Beaver Brook Maple always are. He’ll be doing his maple thing from 11 a.m. to 3 p.m. Saturday, and if you’re interested in checking out what he’s doing, just stop by. The address is 1 Beaver Brook Drive in Bow, and the phone number is 491-0500. Like with many maple operations, it’s never a bad idea to call ahead before heading out.

For more on Maple Weekend, go to nhmapleproducers.com and read the next two pages.