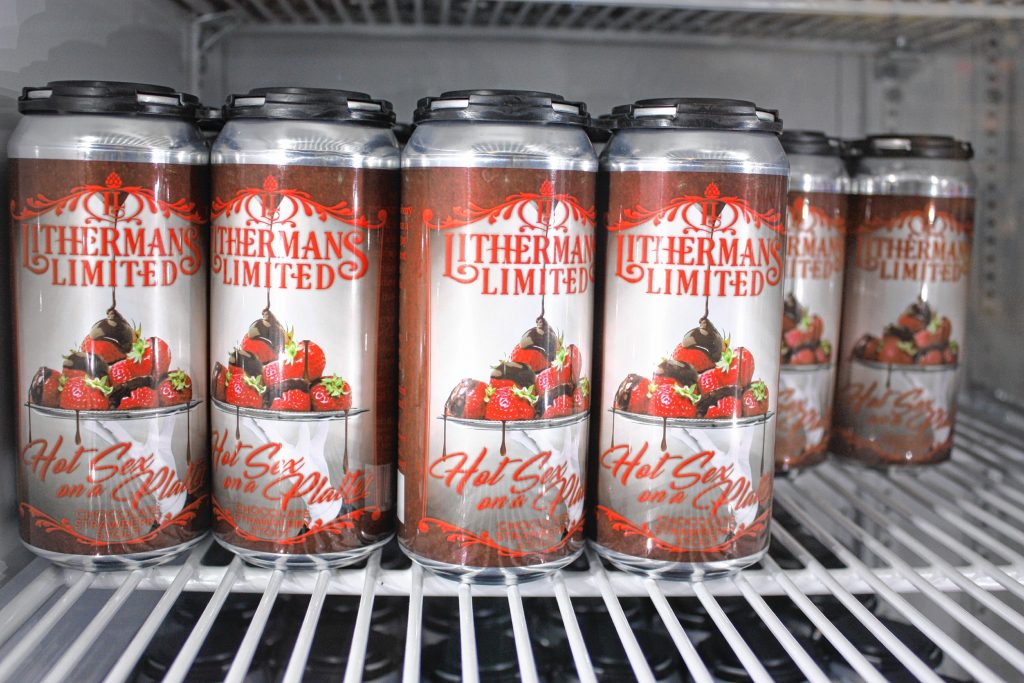 Lithermans Limited released Hot Sex on a Platter, its chocolate-covered strawberry imperial stout made especially for Valentine's Day, last Thursday, and there's plenty in stock at the brewery. Look for it at select stores, too. JON BODELL / Insider staff

It’s almost Valentine’s Day already, which can only mean one thing – it’s time for some Hot Sex on a Platter.

You can interpret that statement any way you want, but if you’re thinking of anything other than the chocolate-covered strawberry imperial stout by Lithermans Limited, you need to get your head out of the gutter – this is a family publication!

This is a special-release offering from Lithermans – they release a batch ahead of Valentine’s Day every year, and once it’s gone it won’t be back until next year. The brewery released the stout last Friday, and co-owner Michael Hauptly-Pierce – MHP – said he expects the current batch to last about five to six weeks. It’s widely available at the brewery both in cans and on tap, and it will be available in select stores starting this week.

As for the beer itself, it has a lot going on. For starters, this imperial stout rocks 9.4 percent alcohol by volume, which is nothing to joke about. It’s a dark brown beer with some noticeable chocolate aroma, and you taste the fruit as the beer works its way down your system.

How it came to be is sort of a funny story. One of the bartenders had a birthday coming up a few years ago and MHP asked her to come up with a beer to be made for her birthday. She wanted something that tasted like a chocolate-covered strawberry, and the next thing you know, an annual tradition was born.

When they made last year’s batch, the guys at Lithermans also put some aside to age – they plan on doing that again this year. The higher alcohol content means this type of beer won’t go bad from sitting in a sealed container for an extended period of time. Stay tuned for updates on when the aged version will be available.

In the meantime, there are a few events on Lithermans’ schedule that might interest you.

Every second Sunday of the month is for originals-only open mic, and every final Sunday is for all-original music by one particular band. On Feb. 24, Kevin Horan will be in the house from 1:30 to 3:30 p.m.

Also, the Prime Time Grilled Cheese food truck will be there Saturday from 11 a.m. to 6 p.m. For more, go to lithermans.beer.