Book of the Week: ‘The Amulet of Samarkand’

Home » Articles » Book of the Week: ‘The Amulet of Samarkand’ 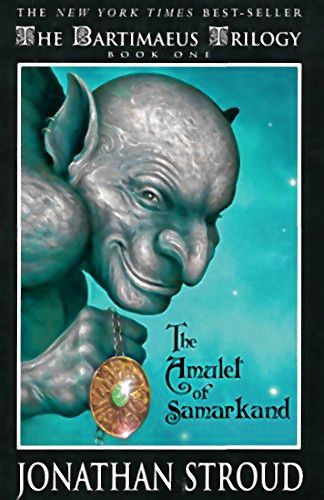 The Amulet of Samarkand

It is wonderful and surprising to find that a book is narrated by a supernatural creature, in this case, a Djinni – immeasurably old, shape-shifting, wily, and a congenial and very funny narrator. His brain is so busy on so many levels that he thinks in footnotes while also describing his ongoing task of stealing a precious amulet from one of the most powerful magicians in Britain. The author takes over the narration for the chapters that describe the training, the politics and the power of London’s magicians.

This is not exactly the Britain that we know from the history books. This British empire is ruled entirely by magicians who maintain their power entirely through their control of supernatural creatures: imps, sprites, djinnis, afrit and more. Bartimaeus is working under duress for the magician who summoned him – not the usual great and powerful mage that Bartimaeus is used to, as he has worked for such masters as Solomon and Ptolemy, but an underage magician’s apprentice who is working without the knowledge of his own master.

Naturally, there is a mistake made by the apprentice which levels the playing field, giving Bartimaeus partial control of his fate. The resulting adventure not only includes political machinations, being lost in London, encountering the Resistance Movement, and a terrifying final battle, in which the Prime Minister and most of Parliament are at risk, but always the ongoing, personal struggle between Bartimaeus and his young master to maintain Bartimaeus’s servitude and control an amazingly complex magical situation.

While this first volume of the Bartimaeus Trilogy stands alone as a ripping, good tale with a satisfying ending, I doubt any reader of fantasy could be content with just this volume, knowing that there are similar pleasures ahead. I can assure you that both Bartimaeus and his young master will return in The Golem’s Eye.