Greater Concord Chamber of Commerce celebrates Citizen of the Year, kicks off centennial 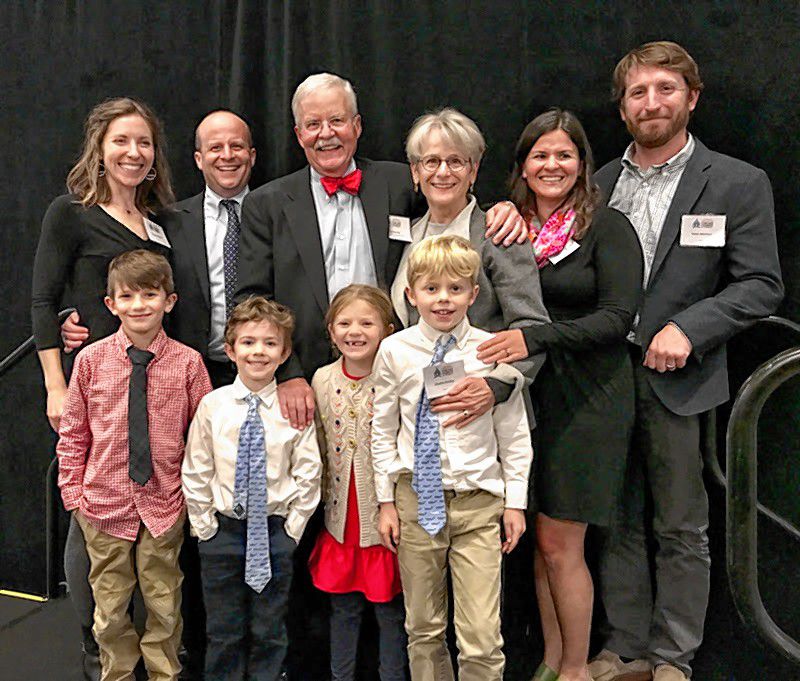 Greater Concord Chamber of Commerce 2018 Citizen of the Year David Ruedig stands with his family at the Chamber's 99th Annual Meeting/Citizen of the Year Award dinner on Nov. 7, 2018. Ruedig (center) is flanked by (from left) daughter-in-law Reagan, son Adam, wife Mary, daughter Laura, son-in-law Peter and his grandchildren (from left) Jack, Tom, Quinn and Charlie. Courtesy of Greater Concord Chamber of Commerce

The Greater Concord Chamber of Commerce kicked off its centennial anniversary year at the 99th Annual Meeting & Citizen of the Year Award event presented by Merrimack County Savings Bank on Wednesday, Nov. 7 at the Grappone Conference Center in Concord.

The Chamber also honored a special member of the community, three local businesses and showcased a new brand to 300 citizens, nonprofit, municipal and business leaders from the capital region who came to celebrate the 2018 Citizen of the Year recipient David Ruedig.

The Greater Concord Chamber has recognized an outstanding individual from the local community with its most prestigious award for more than 50 years and is honored to recognize Ruedig as its 2018 Citizen of the Year. Nominated by both peers and U.S. Sen. Jeanne Shaheen for the Chamber’s highest honor, Ruedig’s selection by a committee of previous winners received high praise from those in attendance and prompted both Shaheen and U.S. Rep. Annie Kuster to write letters presented at the event along with the Citizen of the Year commendation.

The event kicked off the Chamber’s centennial celebration as New Hampshire’s state capital chamber of commerce and recognized three founding members who have supported the organization’s mission with nearly a century of membership – Page Belting Company Inc., Swenson Granite Works and Unitil.

A 100th anniversary felt like the perfect time to bring our brand a bit more in line with our vibrant city, and fellow member Sullivan Creative delivered! Big shout-out to Pam and her team for creating a fresh new logo that still clearly identifies us as the State Capital Chamber of Commerce.

Additional speakers at the event included Concord Mayor Jim Bouley, who thanked the Chamber for bringing along new leaders each year that the city relies upon to fill needed board, committee and municipal positions; James Milliken, past president, provided the invocation; and board member Byron Champlin presented research on the Chamber’s actual date of incorporation, Oct. 18, 1919, and its founding membership – 434 members, 32 of whom were sustaining members, as well as initiatives from the Chamber’s founding year, like a review of Abbot Downing Truck Co.’s plant finances and efforts to get Sears, Roebuck and Co. to move its factory from Littleton to Concord.

Outgoing Board Chairman Philip Hastings of Cleveland, Waters, & Bass, PA, reflected upon the Chamber’s widespread impact throughout the year including passed legislation that will measure the impact of the state prison system on the local community; dialogue with school administrators on planned middle school improvements and the potential tax impact; collaboration with the city on energy projects that will reduce greenhouse gases but limit the cost burden on small businesses; and more.

Attendees enjoyed a three-course meal followed by the Chamber’s induction of 2018-19 Board President Joe Kasper of Northeast Delta Dental, who reflected on the growing momentum in Concord that includes year-round events that draw thousands to the city.