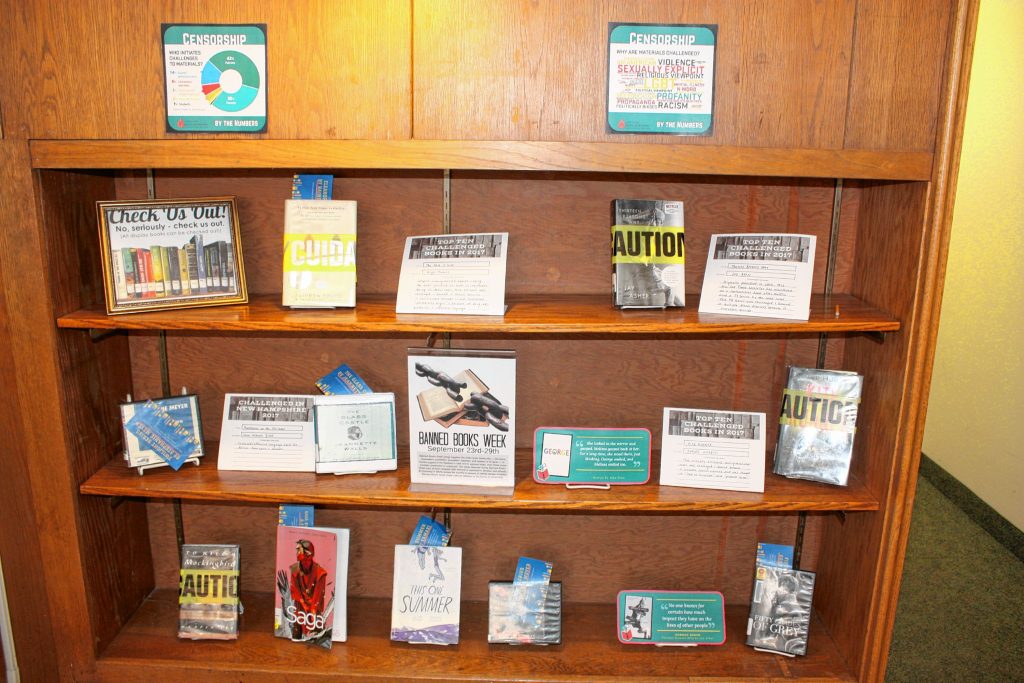 Concord Public Library's display for Banned Books Week, featuring several of the most challenged books of the year, along with a bit of information on why they were challenged. JON BODELL / Insider staff

Catcher in the Rye. American Psycho. 1984. Lolita. Harry Potter (yes, that Harry Potter). What do they all have in common?

These books, among many, many others, have all been either banned or “challenged” in various communities – mostly schools and libraries – at some point in time. Censorship has gone on pretty much since the beginning of time, and at one point or another, the aforementioned books were the targets of parents, academics, the clergy and others easily offended by words on pages.

At Concord Public Library, censorship is not a thing – they don’t practice it – and the library actually celebrated that fact with Banned Books Week.

Banned Books Week officially ended Sept. 29, but the library will continue to stock so many of these banned and challenged books indefinitely. The week brings together the entire book community — librarians, booksellers, publishers, journalists, teachers and readers of all types — in shared support of the freedom to seek and to express ideas, even those some consider unorthodox or unpopular.

The library had the top 10 most challenged books of 2017 on display last week – Thirteen Reason Why (for discussing suicide), The Absolutely True Diary of a Part-Time Indian (for profanity and sexuality), Drama (for the presence of LGBT characters), The Kite Runner (for sexual violence), George (for the presence of a transgender child), Sex is a Funny Word (for the presence of sex education), To Kill a Mockingbird (for use of the N-word), The Hate U Give (because it’s “pervasively vulgar”), And Tango Makes Three (for the presence of a same-sex relationship) and I Am Jazz (for addressing gender identity).

While Banned Books Week is over, there’s never a bad time to stick it to the man and rage against the machine – and what better (and more peaceful) way of doing so than by checking out some books from the library? Just don’t tell your principal that you went outside of school to obtain a copy of the very taboo Harry Potter and the Goblet of Fire (the whole series has been challenged for alleged Satanism).