Take a tour of the arts in Concord with us 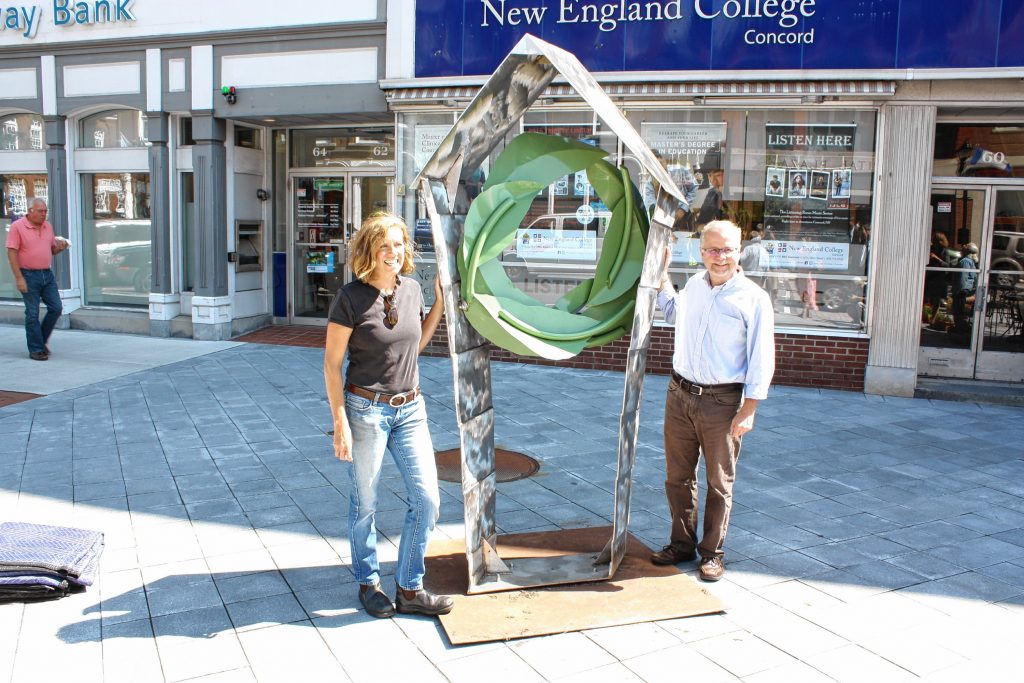 Boston artist Gillian Christy and Greater Concord Chamber of Commerce President Tim Sink pose for a photo beside Christy's sculpture "The Space Within" in front of NEC Concord on North Main Street after installing it on the sidewalk last Thursday. JON BODELL / Insider staff 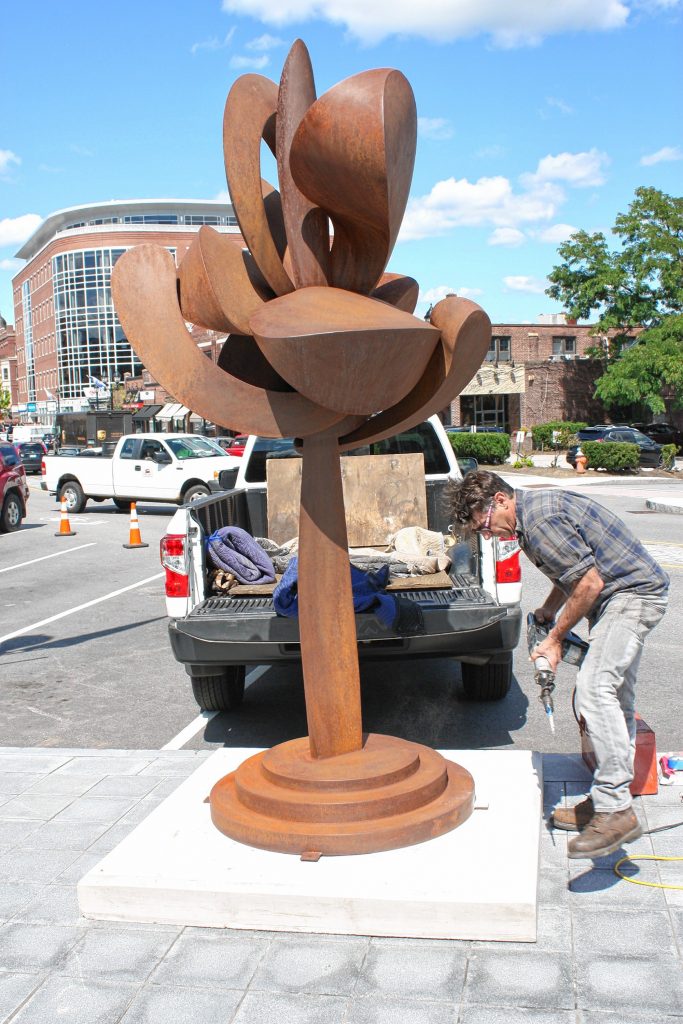 Artist David Boyajian of New Fairfield, Conn., works to install his sculpture "Unfurling With Seeds" at the intersection of South Main and Fayette streets last Thursday, a day in which two big sculptures were installed as public art in downtown Concord. JON BODELL / Insider staff 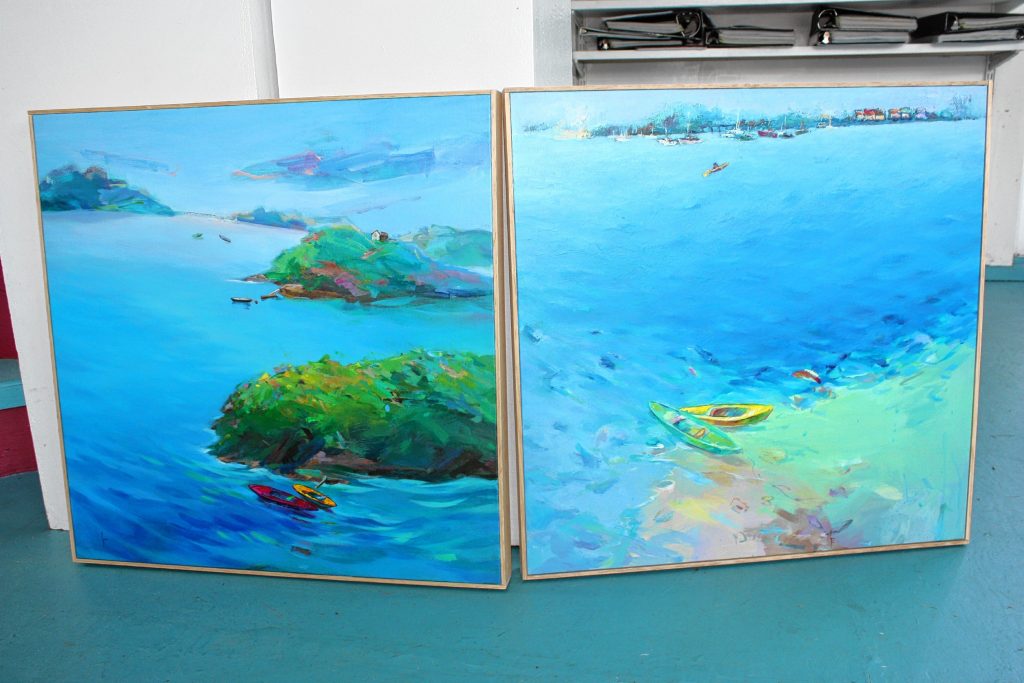 These two pieces by Soo Rye Yoo, "Blue Song - Island" (left) and "Blue Song - Harbor," will be on display at Mill Brook Gallery as part of its Fall Art Exhibit starting Sept. 6. The opening reception for the exhibit will be Sept. 14 from 5 to 7 p.m. JON BODELL / Insider staff 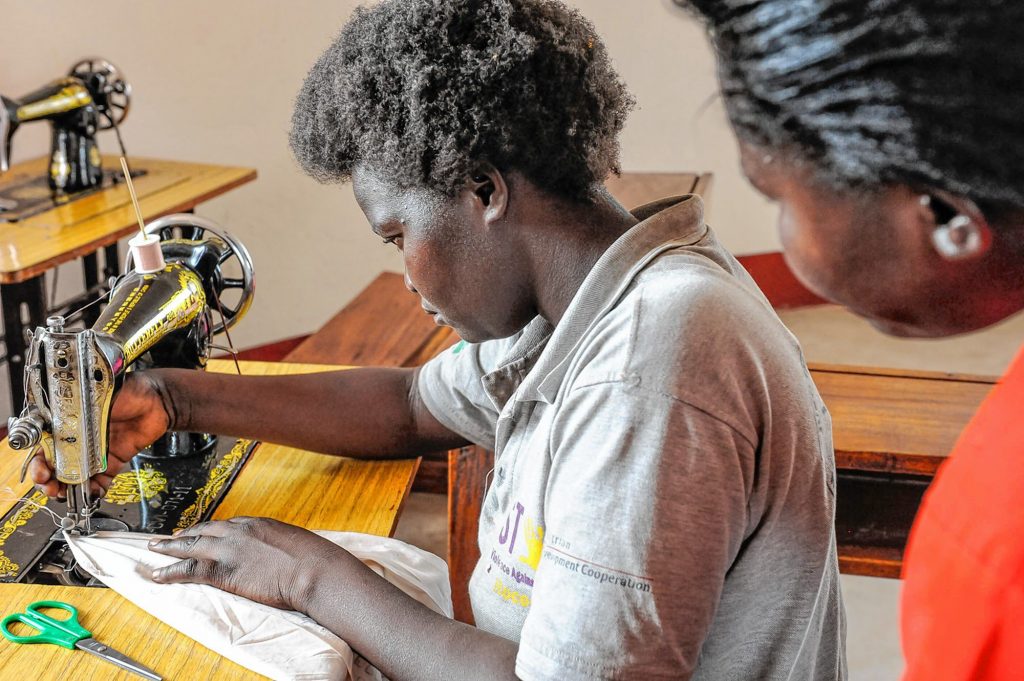 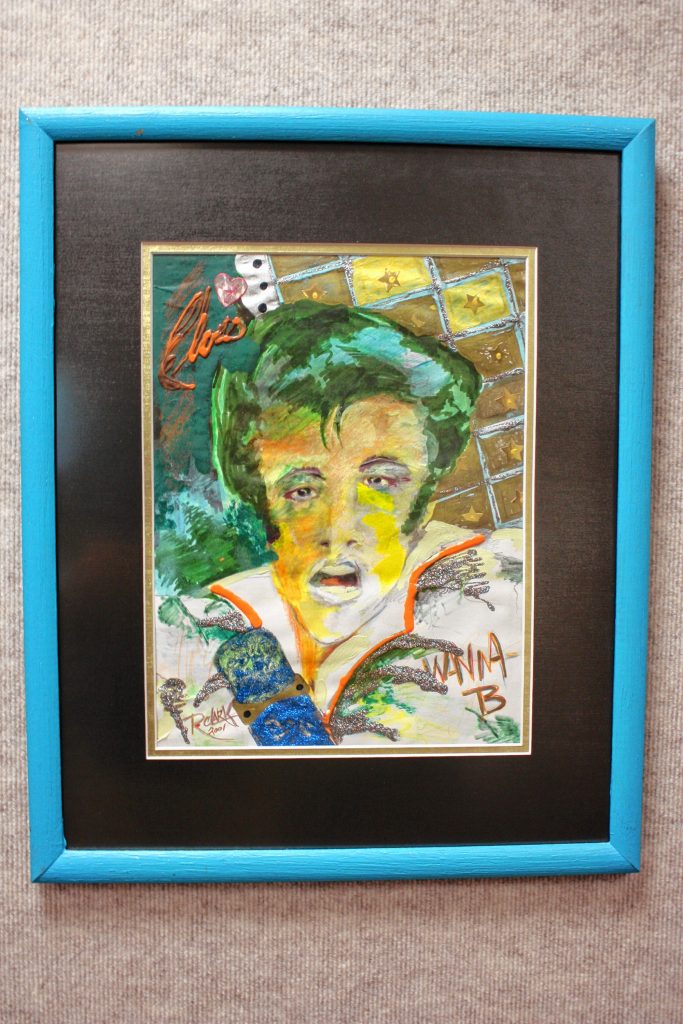 This untitled painting by Richard Clark is on display at the NHTI library with an exhibit of his work until Sept. 16. JON BODELL / Insider staff 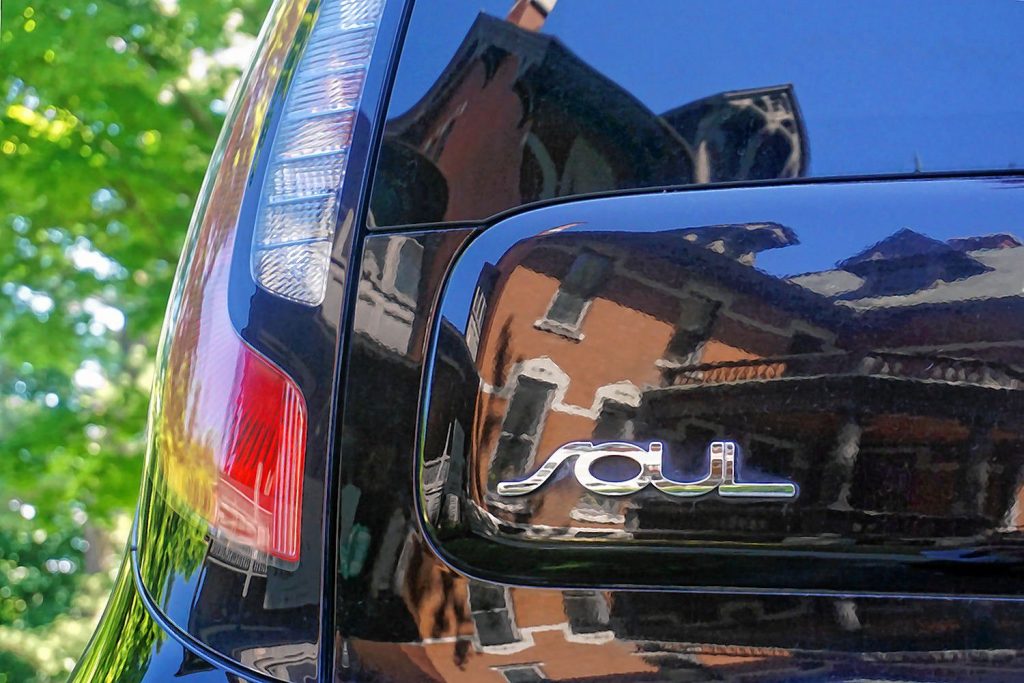 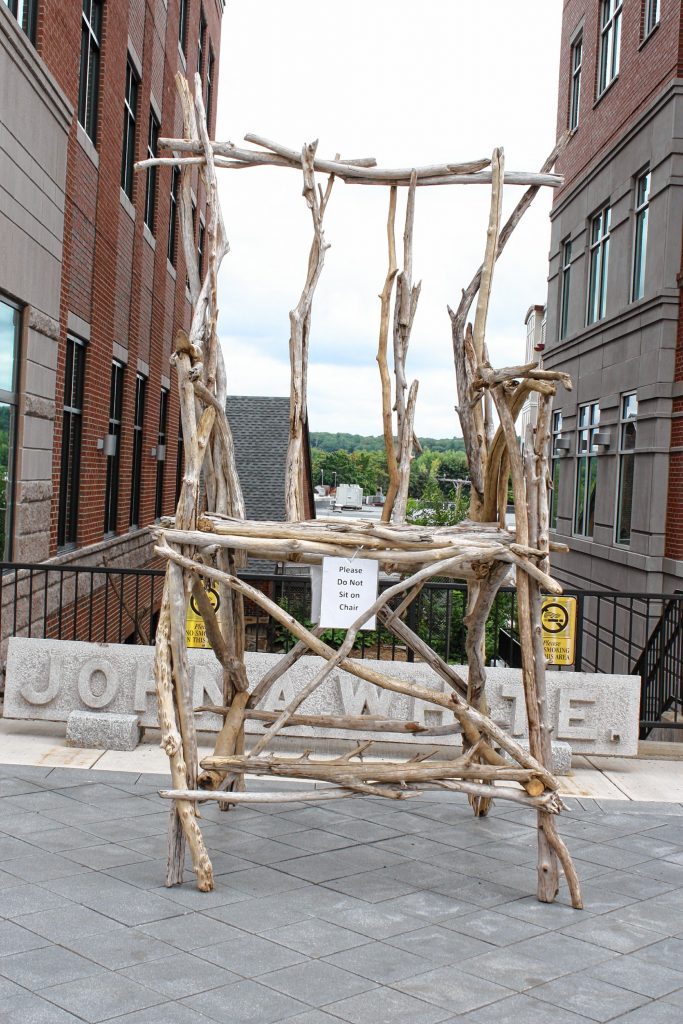 This huge chair made out of what appears to be beach wood was made by League of New Hampshire Craftsmen artist Mark Ragonese. The piece is on display in front of the Smile Building on South Main Street. You can look at and take pictures of it, but just don't sit on it -- you don't want to be the one to break this work of art. JON BODELL / Insider staff 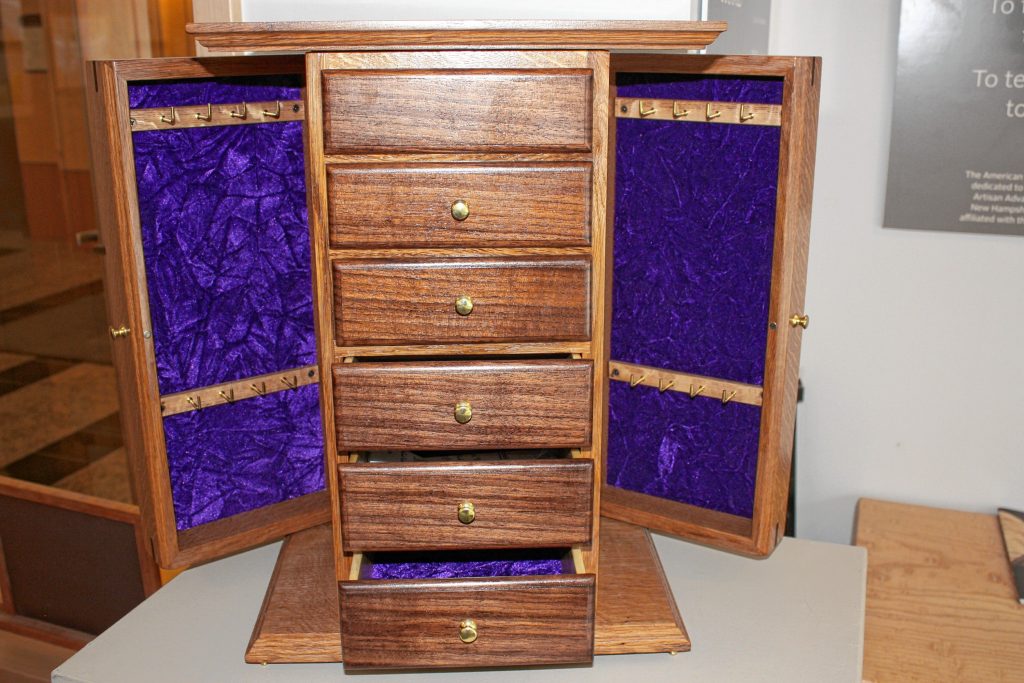 This jewelry cabinet was made by New Hampshire inmate Jeremy Jennings. The piece is part of an exhibit at the New Hampshire Furniture Masters called On the Street, which features furniture made by inmates in New Hampshire and Maine. JON BODELL / Insider staff

It’s no secret that Concord is a pretty good city when it comes to the arts. Whether you’re looking for music, film, paintings, drawings, sculptures, photographs or theatrical performances, there are almost endless options for all of them.

The Insider is also a pretty big fan of the arts, if you haven’t noticed. That’s why we decided to dedicate this whole issue to taking a tour of Concord’s arts. Specifically, we wanted to focus on things that are new, things that are novel and things that are almost gone.

While there are far too many pieces of art in the city to fit into even one issue of the Insider, let alone one story, we’ve done our best to pull together a wide selection of some of the newer, more intriguing pieces we could find. We have paintings, photos and sculptures represented, and we’ve covered everything from the sidewalks of downtown to the showroom of Mill Brook Gallery down by the Hopkinton town line.

The most newsworthy arts item of last week was the installation of two more pieces of public art in the heart of downtown. The city and the Greater Concord Chamber of Commerce worked together to bring in more sculptures to add to Concord’s growing sidewalk collection, which includes the popular “Turtle Boy” by Live Juice, the big dog by the intersection with Loudon Road and the big C-looking thing near the State House. On Thursday, artists Gillian Christy of Boston and David Boyajian of New Fairfield, Conn., were in Concord to help install their sculptures.