Holiday Cards 4 Our Military up and running

Home » Articles » Holiday Cards 4 Our Military up and running 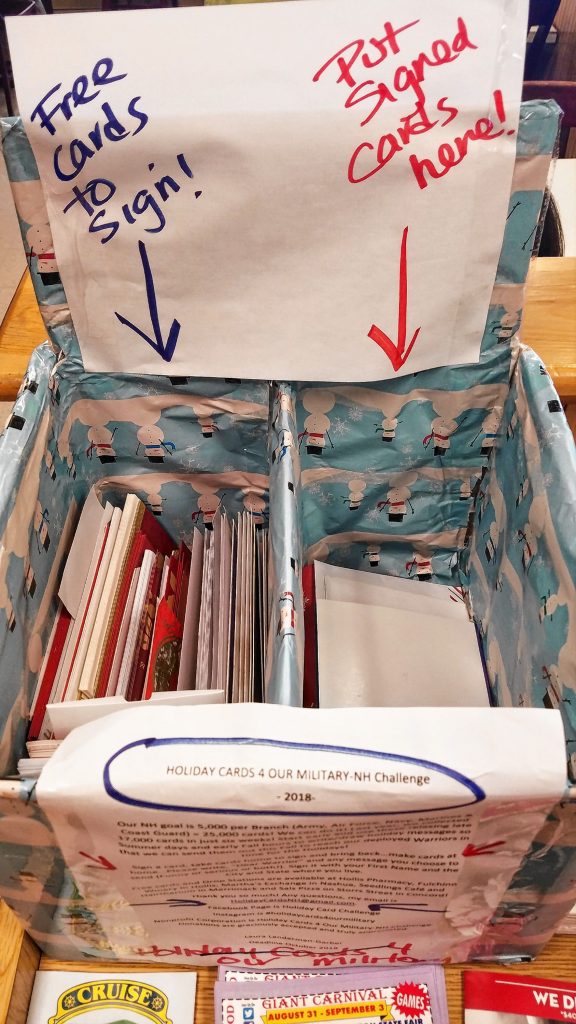 Sal's Pizza on Storrs Street has a box for you to fill out and leave signed holiday cards for our armed forces. The program is called Holiday Cards 4 Our Military-N.H. Challenge. JON BODELL / Insider staff 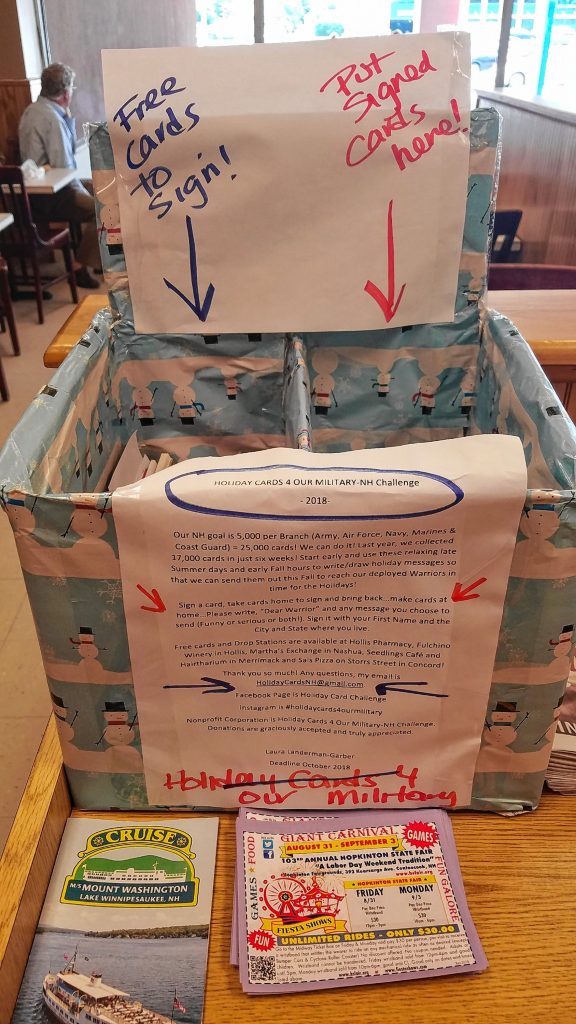 Sal's Pizza has a box full of cards you can sign for a member of the armed forces. JON BODELL / Insider staff

Every time Laura Landerman-Garber meets with another person who wants to help her new nonprofit, she gets this big sense of excitement. And it’s easy to see why.

Come the end of October, Landerman-Garber is hoping to send off 25,000 cards to members of the armed services – 5,000 to each of the country’s five branches – through her Holiday Cards 4 Our Military-N.H. Challenge. That’s where all of you come in.

In order to send out that many cards to military personnel, she’s going to need some help. She got it last year when boxes upon boxes, containing almost 17,000 cards (weighing around 500 pounds) went to the USS Theodore Roosevelt in time for Christmas. The SOCK Club (Save Our Cold Kids) at Concord High coordinated a card drive that resulted in more than 1,600 greetings from students in the state capital. They’ll be doing another school-wide drive in September that will likely eclipse the first-year total; at least that’s the hope.

“The people of Concord were great last year,” Landerman-Garber said. “They even donated over 1,000 unused cards for this year.”

But for those of you who would like to get an early start on spreading your holiday spirit, you can just make a quick pitstop at Sal’s Pizza in the Storrs Street Plaza to make that lofty goal a reality. Right now, Sal’s has a box of free cards that folks can pick up, write a little greeting inside and return for collection. You can also use your leftover, unused cards from last Christmas (or previous ones) and drop them off at Sal’s.

We can only imagine It would be hard to find any on the store shelves these days, but you never know with some of those big-box stores being so far ahead on their holiday displays.

“I probably have about 1,500 cards in my house,” she said. That’s a good start for mid-August.

You can write as little or as much as you’d like, just remember to use “Dear warrior” to address whomever it is that will eventually read the card. While there’s no obligation, you may also put your first name, city and state. There are official guidelines at the collection box or you can contact Landerman-Garber.

“They can draw a message, write a message, be funny or be serious,” Landerman-Garber said. “If a group wants to do a group signing event, I’ll get them cards.”

Since she formed a nonprofit this year, Landerman-Garber has gotten some great donations, including the boxes for shipping and money to cover what will surely be a hefty price tag when it comes to shipping. These cards will be going all over the world after all.

Last year’s effort came out of a yearly tradition and a recent deployment. For years, the Landerman-Garber family had a tradition of writing cards for military members – active or retired – at Thanksgiving. And we’re talking about before you eat your holiday meal. When a close family friend was assigned to the USS Theodore Roosevelt, she wanted to make the season brighter for those on board.

She asked local churches, hospitals and schools in her hometown of Hollis to help with writing cards and the response was nothing short of impressive.

“It was dumb luck or good fortune that it all came together in six weeks,” she said.

Now with the help of politicians, schools, one very influential newspaper (that’s us) and a more planned out approach, the hope is to grow even bigger.

“I started calling and talking to people,” Landerman-Garber said. “And I’m just incredibly grateful for the big hearts of our New Hampshire residents.”