Lithermans did another beer collaboration 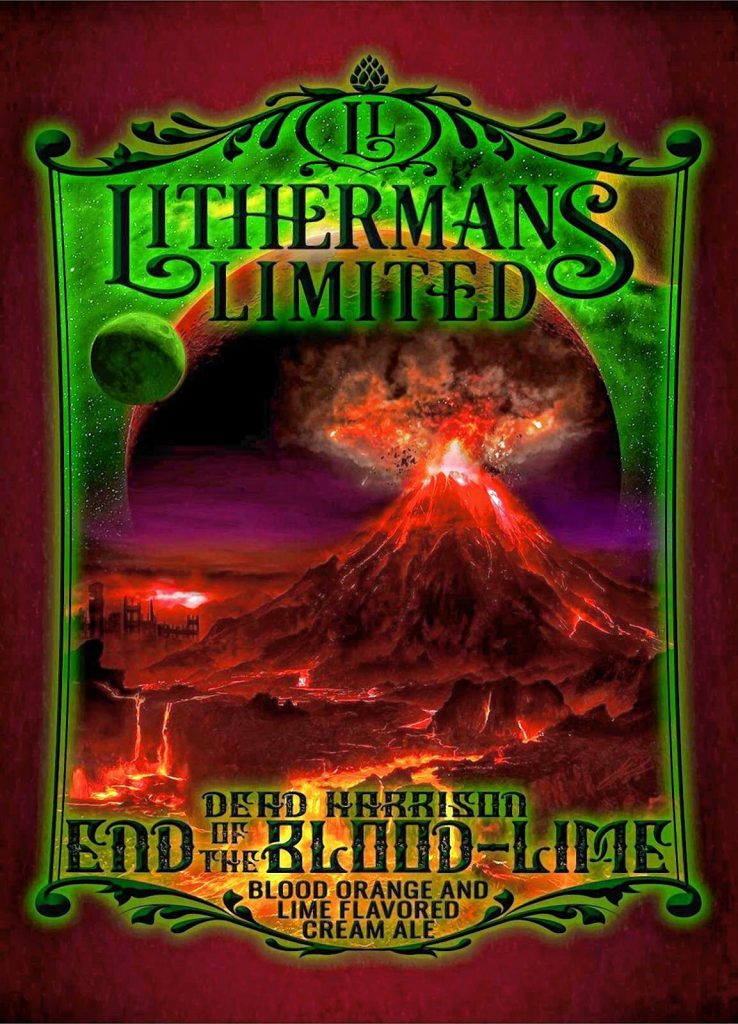 It seems like the guys at Lithermans Limited are always coming out with a new beer.

Which makes perfect sense considering they’ve got more than 125 on their created list since opening a little more than two years ago.

But the next one to hit the draft lines is a little different than most – and we’re not just talking about the fact it’s a cream ale flavored with blood orange and lime. The End of the Blood-Lime (catchy right!) is a collaboration with Nashua-based band, Dead Harrison and is named after one of their songs, End of the Blood Line.

“We were just talking one day and we said, ‘We should make this happen. We should make a beer,’ ” said Lithermans co-owner Michael Hauptly-Pierce.

It was planned about nine months ago, and more recently they two sides sat down to pick a style.

“They came in with some ideas of a coffee cream ale,” Hauptly-Pierce said.

But that didn’t quite fit the style, so they started talking about combos and songs and soon enough their aforementioned songs came up and Hauptly-Pierce said say no more.

It ended up being a 6 percent cream ale – brewed with only the finest blood orange and lime purees – and how Hauptly-Pierce described as the American take on a German pilsner, will make it debut Friday night at Area 23. Even before it hits the draft lines at Lithermans.

That’s because Dead Harrison will headline a night of tunes at the Smokestack Center establishment featuring bands Blackletter, The Negans and Conduit. The music begins at 7 p.m., but the stars of the show will be the last ones on stage, so we suggest getting there even earlier and taste-testing the one-off that was brewed just a few weeks ago.

“After that we’ll release it to the public,” Hauptly-Pierce said. Meaning it might be found wherever Lithermans is on draft.

But starting Saturday, it will be join the ranks of the tasting room, with hours from noon to 7 p.m., and should be on for a few weeks.

And if you either didn’t get enough of Dead Harrison on Friday or couldn’t make the Area 23 show, the band will be putting on an acoustic set at Lithermans on Sunday from 2 to 4 p.m.

We’ve never seen the band live, but listened to a couple of tracks at deadharrison.bandcamp.com. The best way to describe what they play is a “dark metallic doom rock” and that’s their words not ours. Give them a listen and you’ll see.

About a decade ago, Hauptly-Pierce’s former band, Chemical Distance, toured with Dead Harrison (then known as Mortuus Ortus) for a number of shows, and co-owner and head brewer Steve Bradbury (aka Doc Jones) even spun a few records at some shows, so there was some history between the Lithermans owners and the band.

So when Lithermans was looking to do another collaboration brew with the world of music, it was a no-brainer for Dead Harrison to be next on the list. If you remember last year, they made Sunnyland, a blonde ale brewed with orange peel, in collaboration with Ed Gerhard and held a show at the Capitol Center for the Arts for its release.

So you have two opportunities to hear the music and taste the beer in the same place.

Now all that’s left is to clear some space in your calendar to do so.