NH Master Chorale to perform ‘Time in Our Voices’ in Concord, Boston, Plymouth 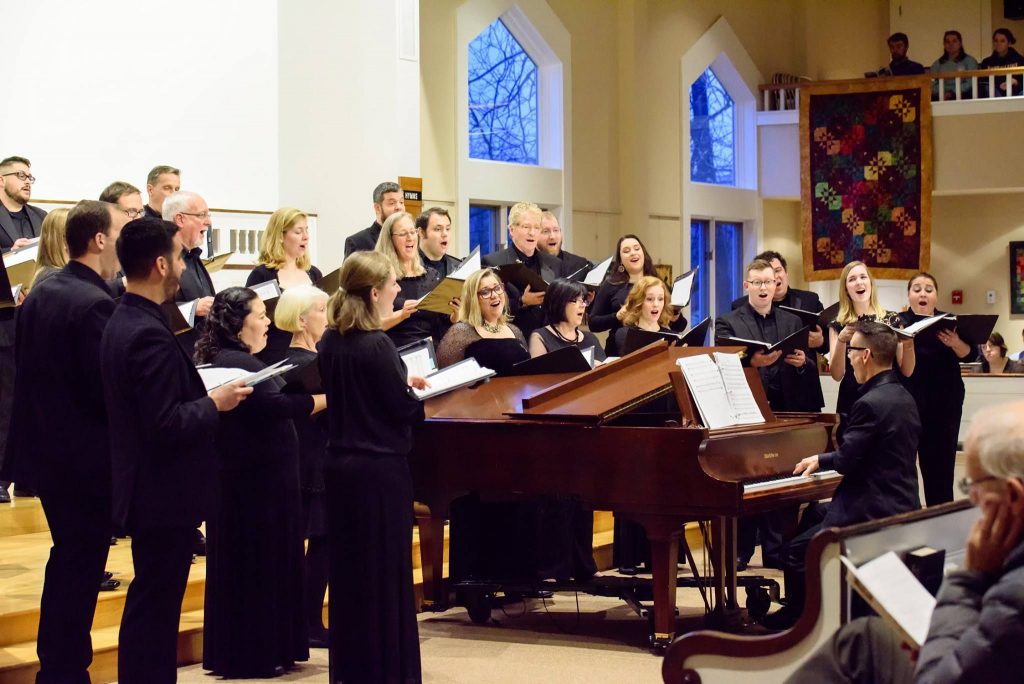 The New Hampshire Master Chorale, one of the region’s leading chamber choirs, will make its Boston debut on Friday in a concert of wide-ranging contemporary music. It includes the premiere of a new work by Boston composer Oliver Caplan called “We Exist” – a plea for a universal humanity composed in response to the 2017 racial violence in Charlottesville, Va.

The concert, featuring the 30-voice Master Chorale and chamber orchestra under the direction of Dan Perkins, will be performed at First Church Boston at the corner of Marlborough and Berkeley Streets in Boston on Friday at 8 p.m. It will be repeated Saturday at 7 p.m. at First Congregational Church in Concord and Sunday at 4 p.m. at the Plymouth Congregational Church in Plymouth.

The concert’s theme, “Time in Our Voices,” is taken from Vermont composer Moira Smiley’s piece of that title for chorus and cellphones. In five movements, it captures the universal way our voices reflect the essence of the life cycle, from infancy through old age. Smiley interlaces choral passages with spoken voices representing the corresponding ages, played over smartphones.

Perkins says when he heard the premiere of “Time in Our Voices” last year in Los Angeles, he was “attracted to the messiness of juxtaposing the recorded voices with the beautiful choral writing. (It) really worked for me, not as a gimmick, but as a strong effect and statement.”

The third choral work on the program is “Adam’s Lament” by the widely performed Estonian composer Arvo Pärt. Set in liturgical Russian, the piece portrays, in music both spare and resonant, Adam’s anguish over his fall from grace and the burden of guilt he feels “because peace and love were lost to all men on account of his sin.”

The text of “Adam’s Lament” is from Saint Silouan, a Russian monk from an Eastern Orthodox monastery on Greece’s Mount Athos who spanned the 19th and early 20th centuries.

In the saint’s imagined lament, Adam’s grief stems not only from his banishment from paradise but also from the murder of his son Abel by his brother Cain. “Peoples and nations will descend from me … and they will live in enmity and seek to slay one another,” Adam laments.

This lament is paired with “Fratres” (“Brothers”), a 1977 orchestral piece by Pärt that illustrates his tintinnabuli (bell-like) style of composition. Based on a set of nine chord sequences, it combines frantic activity with stillness, illustrating Pärt’s belief that “the instant and eternity are struggling within us.”

Adam’s grief and the struggle of “Fratres” find a hopeful answer in Caplan’s “We Exist,” with words from the contemporary American poet, novelist and journalist Naseem Rakha. This is the Master Chorale’s second commission for Caplan; last year the group premiered his “Eve Absinthe Alice,” setting of poetry by Ruth Kessler.

Rakha’s poem for “We Exist” and Caplan’s musical setting embody their response to the racial enmity and violence in Charlottesville. Though without explicit reference to that tragedy, the poem speaks of the need to resist “downdrafts of doubt” and “the shrapnel stabs of hate” created by the age-old tribal hatreds symbolized by Cain and Abel. “We Exist” yearns for a universal community of “old young dark light/all faiths/all genders/all races.”

That resonates with Perkins and the like-minded Master Chorale he founded 14 years ago. “We have a responsibility to use our voices in a call to action,” Perkins said. “As Caplan says, we must ‘speak against affronts to freedom.’ ”

Friday at 8 p.m. – First Church Boston, 66 Marlborough St., Boston. Corner of Berkeley and Marlborough Streets, a short walk from Arlington Street or Copley Square. Parking can be found at the Boston Common Garage.

Tickets are available at nhmasterchorale.org and at the door for $30 general, $25 senior or $15 for a group of 10 or more. Free admission for undergraduates and students in grades K-12.

The New Hampshire Master Chorale is a nonprofit choir established in the spring of 2003. This premier chamber ensemble is dedicated to excellence in the art of choral music performance. Members of the group are trained singers, auditioned from throughout New England, who have performed as soloists and in choral ensembles throughout the world.

You can get a taste of the NHMC on the SoundCloud page: soundcloud.com/nh-master-chorale. Find them on Facebook and Twitter: facebook.com/NHMasterChorale and twitter.com/nhmasterchorale.