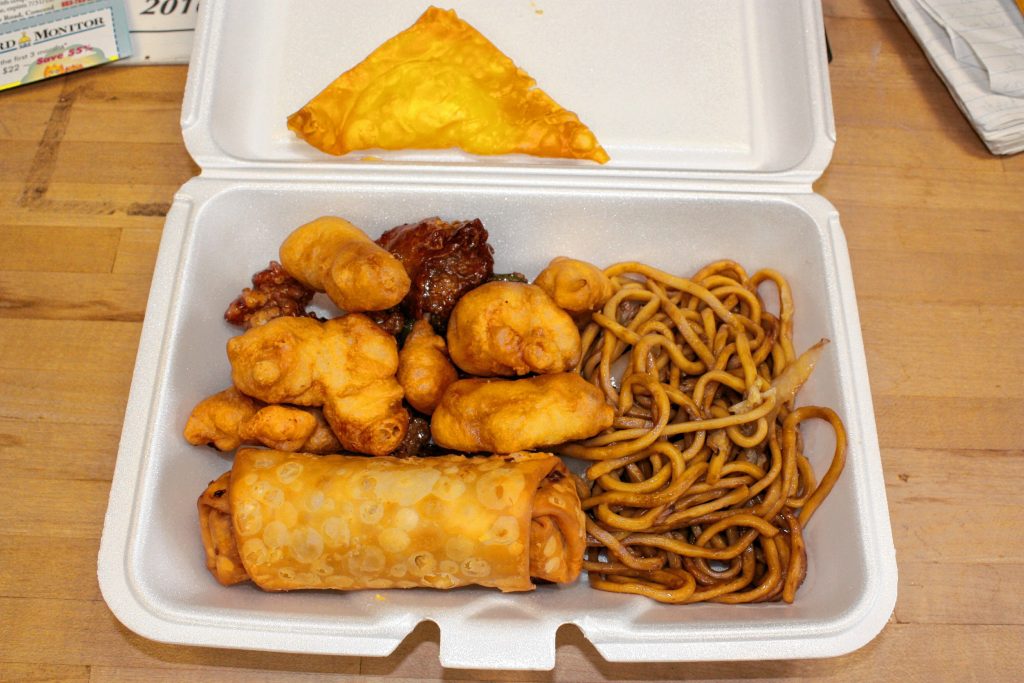 We got a big box of everything at the lunch buffet at Asian Taste in Penacook. THE FOOD SNOB / Insider staff

If there’s one thing that gets a Food Snob excited, it’s a buffet. The mere idea of a long line of various foods all lumped together for you to create your own meal is the stuff of Food Snob dreams.

That’s why we decided to hit up the lunch buffet at Asian Taste in Penacook (or is that still Concord, right at Thirty Pines?). The place is just a 9-iron shot from our office, but weirdly enough we had never Food Snobbed them before. That seemed like a shame, given their huge menu and decent prices, so we had to put an end to it once and for all.

The menu is huge, but we went for the buffet, where the options are more limited (which, in some cases, is a good thing). The lunch buffet is offered every day (except Monday, when they’re closed) from 11 a.m. to 3:30 p.m. and you can get everything you can fit into a styrofoam box – it has to be able to close – plus a can of soda for $7.95.

There were many options when we went in a little after noon last Wednesday, but we decided on a crab rangoon, a scoop of vegetable lo mein, some chicken fingers, an egg roll and some Bourbon chicken.

First up was the crab rangoon, which was very crispy and sweet. It had a rich, savory flavor and was lightweight and easy to down. There was not much crab flavor to speak of, but when is there ever with crab rangoon? It’s really always about the cream cheese, and the kind used in this rangoon was very pleasant and not too thick.

With the chicken fingers, the chicken itself was a little dry – they may have been sitting for a little bit. The battered outside was not soggy though, nor was it hard, so it was still edible and not bad. We added duck sauce for moisture and a little extra flavor. Some of the pieces weren’t as dry as others, and we used some spicy mustard too, which comes in a packet and isn’t as good as the stuff you get in those little cups.

The Bourbon chicken was pretty dry and crispy despite all the sauce. The first one we tried was actually pleasantly crunchy and felt more like a snack food. The sauce was on the sweet side, making it taste like a crunchy, sweet treat. Some green pepper slices helped soften the texture a bit. These were pretty good sized chicken pieces.

The veggie lo mein was a little bland, quite frankly. We added some soy sauce to liven it up, as we always do any time we eat any kind of lo mein at all. It wasn’t hot (temperature-wise) by the time we ate it and this particular scoop didn’t get very many veggies in it – only three little slivers of onion, in fact. It was essentially just a scoop of plain noodles. We only took a small scoop so we could have room for plenty of other items, and maybe the small sample is the reason for the lack of veggies in it.

The egg roll was crispy and still pretty hot by the time we ate it – this was the last thing we dove into. The first bite had a little more roll than filling, but the ratios evened out with each bite. Like most egg rolls, it was heavy but not overly greasy.

By the end of the meal we were pretty full and not feeling too bad, which can’t always be said after wolfing down a pound or two of Chinese food.

If you’re in the mood for a quick, cheap and filling lunch, try Asian Taste. Just beware – it’s take-out only, and there are no tables or chairs inside. Call 753-8855 to place an order.