Food Snob: We took the Lunch Lady food truck for a spin 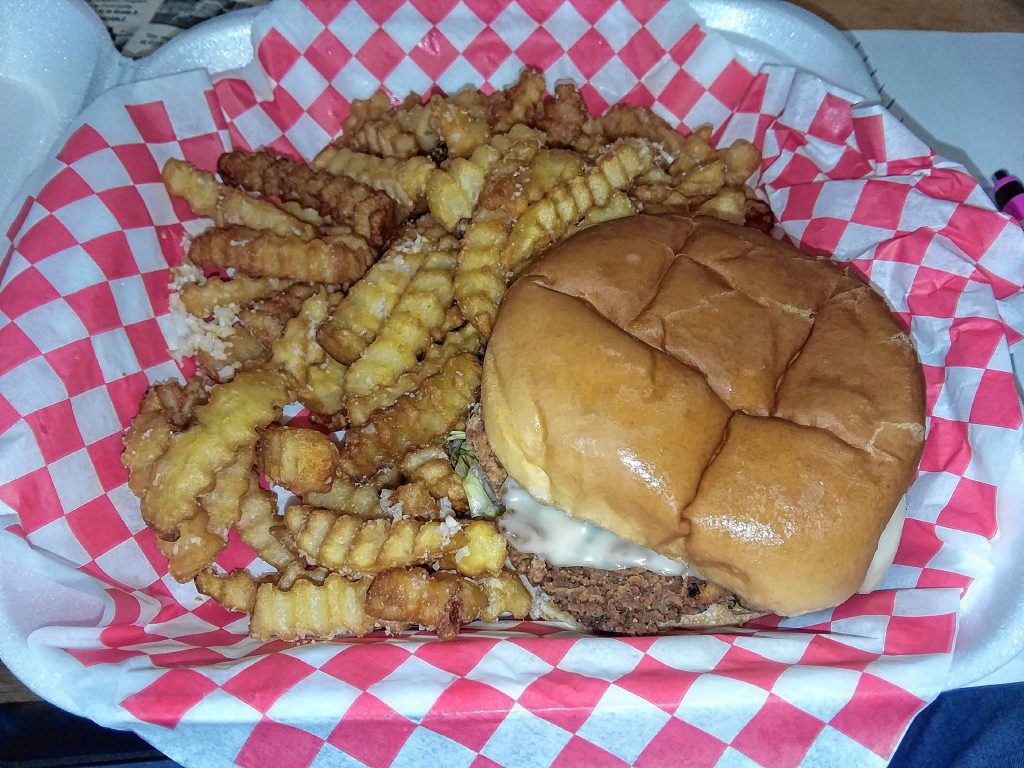 A couple weeks ago, as we feverishly moved about town looking for signs of craft beer, we spotted something in the Everett Arena parking lot.

It was a blue and green truck that we had never seen before and from a distance, it appeared to be one that was serving food. Unfortunately, we didn’t have time to stop and when we rolled back by a few hours later, the truck was gone.

But we were determined to get to the bottom of it – and we weren’t the only ones. On Monday, we saw that Monitor photographer Liz Frantz caught up with J.J. Hall and her Lunch Lady Food Truck for a little story. Our assumptions were confirmed.

So with only a can of soup in the lunch box for Monday and a big appetite after a busy deadline morning, we skipped the beef and country vegetables for our first food truck adventure since last summer, when we hit up both The Rolling Grill 2 in the Home Depot parking lot and Zac’s Snax in Bow.

We weren’t the only interested in trying a new place to start the week. There was a couple gentlemen and a woman (who read about it in the paper) waiting for food when we got there. A few others came while we waited, each one having seen the story in the Monitor.

The menu plays off the whole school theme, using grades and administrative positions to identify options. You can even get the Detention.

Now going into this, we also read about the Vice Principal. We learned it’s Hall’s specialty, and it was going to take something jumping off the menu board to change our minds.

The VP is a hand breaded, fried chicken sandwich topped with lettuce, tomato and mayo. The rest of the menu looked good – and we’ll get to that later – but we were sold.

We opted against the mayo (don’t like) and tomato (didn’t feel like), but added a slice of American cheese. It took about 10 minutes or so for our order to be ready. It was a chilly afternoon to be standing outside, but we quickly determined it was worth it.

In addition to the sandwich, which was $8, we choose to splurge with a side of garlic parm fries ($4). We had to try a couple things to really get a feel for how the food is. You can also get regular fries for $2.50, or chips for 50 cents.

Now we’re not going to lie, it was torture driving back to the office. The garlic parm fries smelled amazing, as did the fried chicken. We couldn’t help but sneak a few fries, but there was still a photo shoot to create, and this meal had to be looking its best.

After a few snapshots, it was time. First bite of the sandwich confirmed: we made the correct decision. The chicken was super moist, but the outside had that desired crunch. The cheese was a nice addition and it came on a hamburger bun with shredded lettuce.

The sandwich was very good all the way through. It was an even thickness, juicy and the batter was nice.

The garlic parm fries, which Hall recommended we try, were very tasty. It had a nice balance of garlic and parm, while still tasting the crinkle fries.

It was a lot of food, but we still managed to finish it all. It was too good not to.

In addition to the VP, there’s the Principal, a BBQ pork sandwich, topped with slaw.

For those looking to remember the elementary school years, you can order a grilled cheese (1st grade), the skirted cheeseburger (2nd), BBQ pork nachos, a chicken Caesar or buffalo chicken wrap.

Middle school fans have the choice of a black and blue burger, the vegetarian/vegan option – quinoa sweet potato tacos – and what is billed as the Lunch Lady’s famous Reuben egg rolls.

The high school options include chicken lettuce wrap (which will return in the spring) or the arugula apple salad (add chicken for an upcharge).

As for detention, that’s the VP with three spinach mozzarella sticks and marinara on top. They call it a six-napkin sandwich. You can also get the spinach mozz sticks as a side.

Hall will be open through Dec. 29, Monday through Friday 11 a.m. to 2 p.m. at Everett Arena. She will then shut down for the winter before reopening in March.