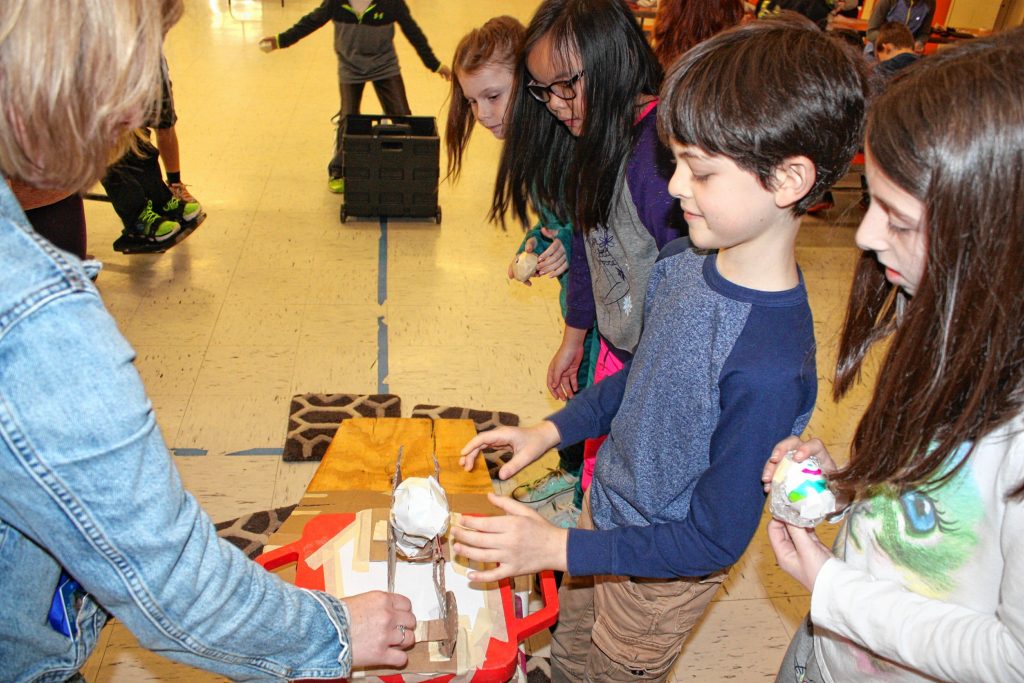 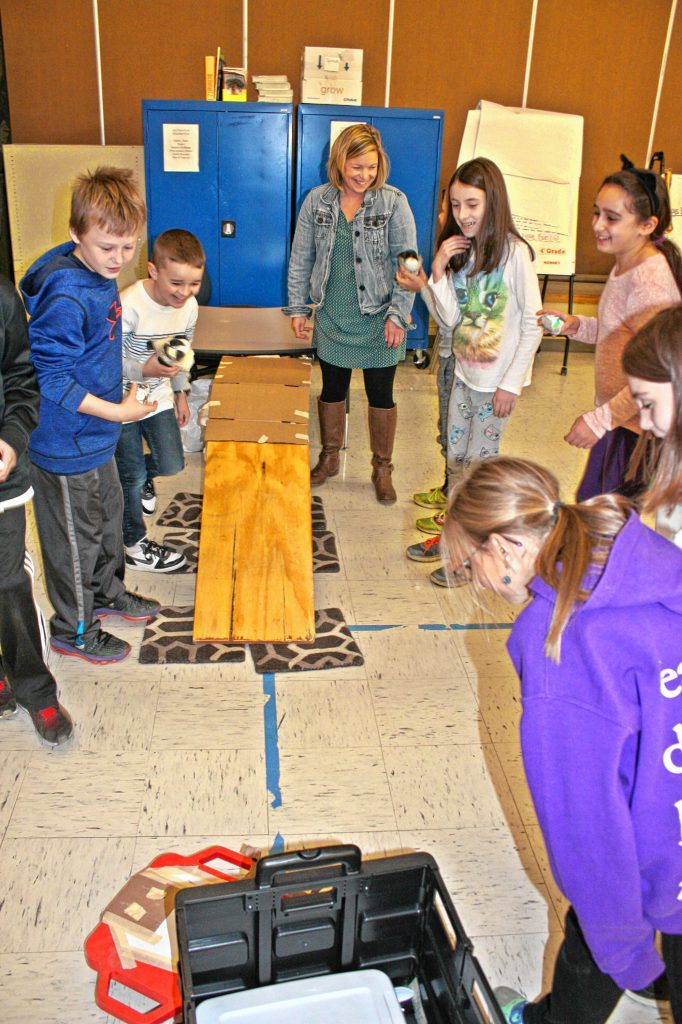 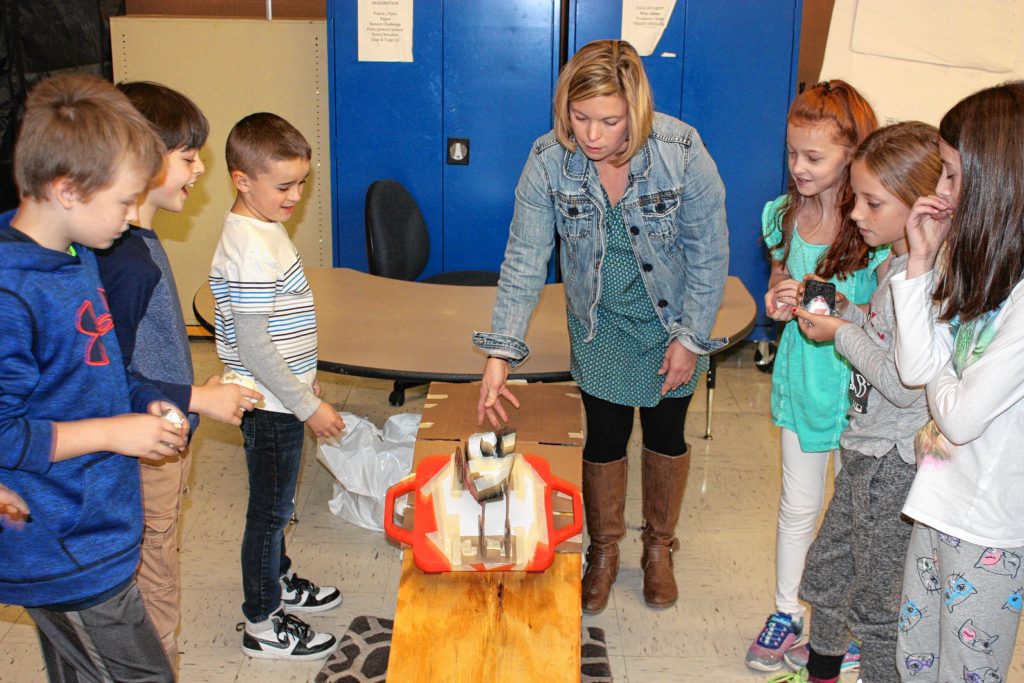 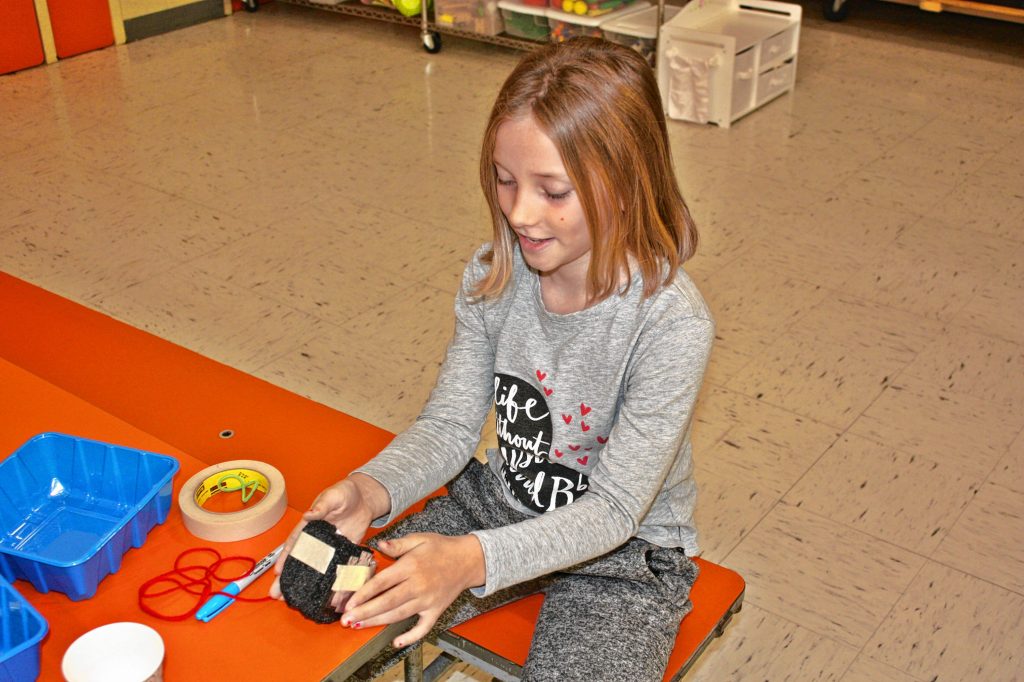 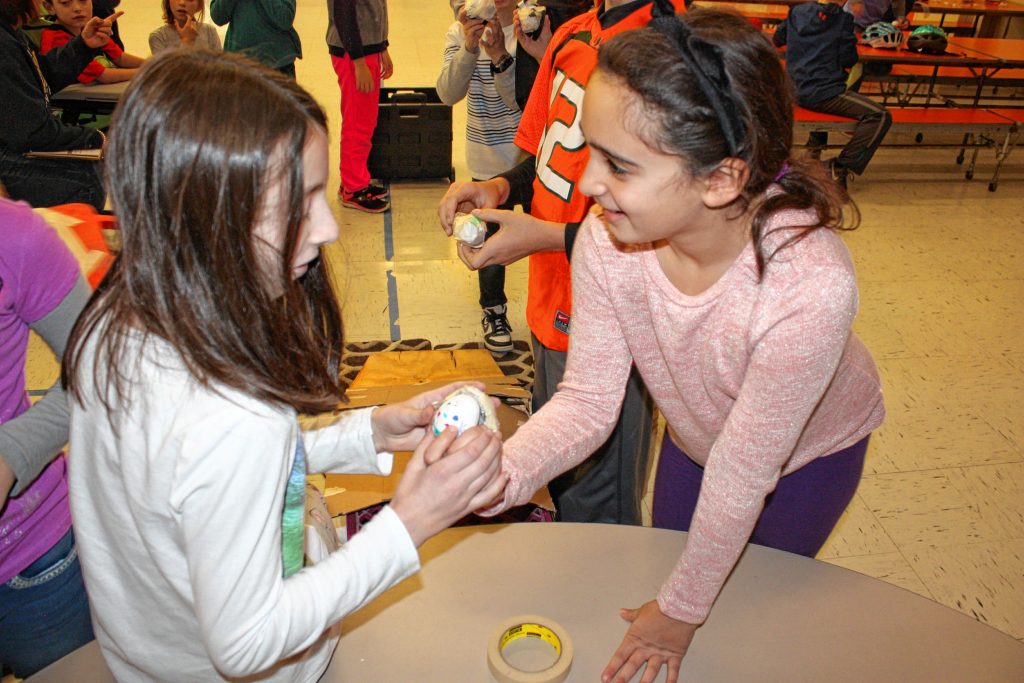 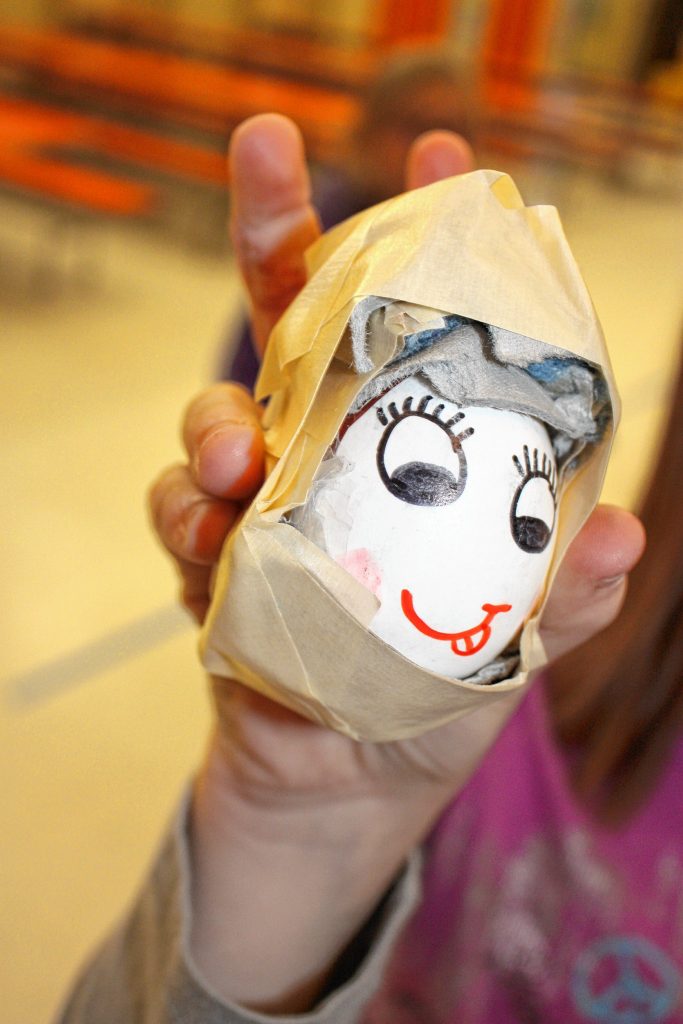 Students had some wildly different designs for both their egg helmets and their egg faces. As you might imagine, results also varied wildly. JON BODELL / Insider staff 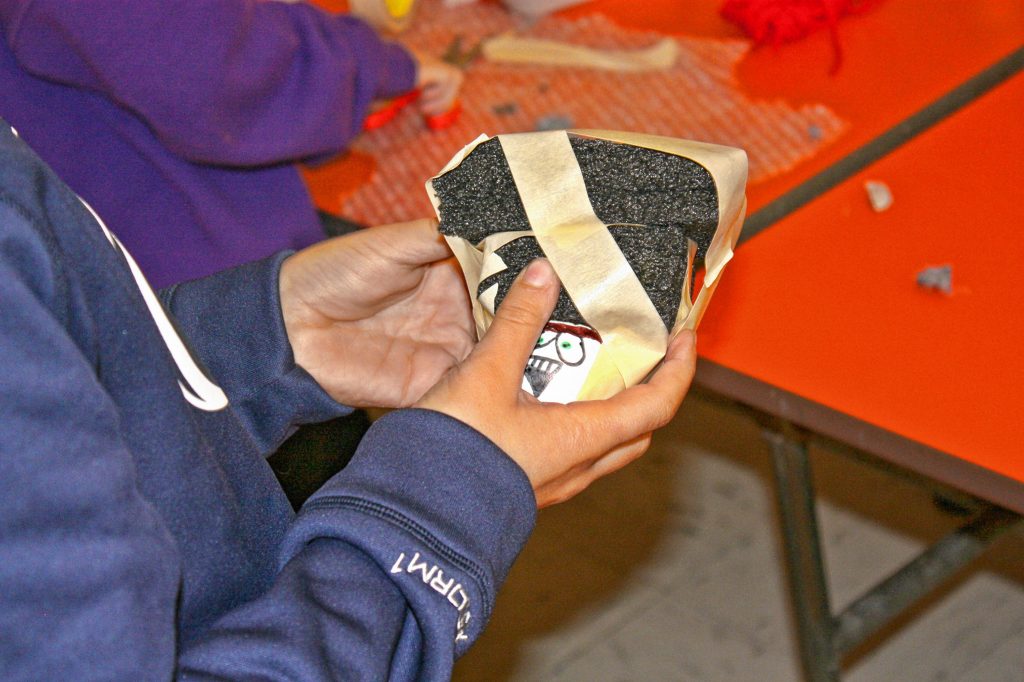 Students had some wildly different designs for both their egg helmets and their egg faces. As you might imagine, results also varied wildly. JON BODELL / Insider staff

Concussions, unfortunately, have become more and more prevalent in today’s society. It seems that just about every day, some star athlete we watch on TV is diagnosed with a concussion, or some student athlete we’ve never heard of has to take the week off of practice for the same reason. In extreme cases, people even die from a disease caused by repeated blows to the head.

Concussions are no fun, but they are a reality, and it’s important to know about them, understand them and learn how to avoid getting them, especially at a young age.

That’s the goal of Jill Pelletier’s health class lesson at Bow Elementary School, which began at the end of October and wraps up Wednesday.

Starting a few weeks ago, Pelletier worked with two fourth-grade classes at Bow Elementary on a lesson about concussions and helmet safety. The first lessons were purely informational – students learned what concussions are, how they’re caused and the problems they can cause.

Once that was out of the way, it was time for the fun part.

Phase 2 of the project entailed the building of helmets. The helmets, though, would not be for the students, but for their “pet eggs” they were charged with protecting.

Similar to those old-school home economics lessons where students had to take care of an egg as though it were a baby, or science projects where kids were tasked with creating a system designed to protect an egg from a high fall, this Bow Elementary project challenged students to design and create a helmet that would protect an egg from a ride down a ramp. The egg would sit in a cardboard bike, which would go down the ramp and crash into a hard plastic crate at the bottom.

There were a couple of guidelines for the helmets.

“They can only use the materials provided,” Pelletier said, “and it’s supposed to be a hat.”

The students had tape, egg cartons (fittingly), bubble wrap, foam padding, yarn, glue and markers at their disposal, and they were free to do what they wanted with them, as long as the helmet only covered the egg’s head – although several students went rogue and created full-body casts for maximum protection.

Phase 3 of the project entailed testing the helmets and making revisions. This is the part we were lucky enough to drop in on last week.

Students had their helmet-clad eggs ready to go right at the beginning of the class last Thursday, and the designs were as varied as one could possibly imagine – some were heavy on tape, others featured a lot of bubble wrap, some made use of foam padding, some had seemingly no protection at all but lots of decoration.

The class began with Pelletier setting up the ramp at the front of the cafeteria – she doesn’t have a set classroom, so her lessons move all about the building. The ramp rose about 3 feet off the ground, and at the top sat a little scooter with a homemade cardboard bike attached to it, complete with an egg-shaped seat. At the bottom sat a large, solid, heavy plastic crate that would serve as a crashing destination for the eggs.

She let the riderless bike/scooter combination whiz down the ramp to show the students what their eggs would be in for. During her demonstration she confessed that her own egg cracked on its first test run, potentially putting the students’ minds at ease.

Then it came time for the students to put their work to the test. When Pelletier asked who wanted to go, the whole place jumped up in excitement.

The first few eggs that went down the ramp were too top-heavy, with some of the eggs falling out of the bike on the ramp, never making it to the intended crash site. Some of these falls inflicted serious damage to the eggs.

After a minute or two, the kids realized that the bottom of the ramp by the crate was the place to be, as sitting right next to the crash site would provide a front-row view of the egg carnage, or lack thereof, which of course was the goal.

One student would send his or her creation down the ramp, where a couple others were waiting anxiously to see whether it would survive. Enthusiastic shouts of “It survived!” or “It broke!” filled the lunch room, and it felt like a lot was on the line every time a silly-faced egg made its way to the top of the ramp.

After the initial test run, students then took their eggs and helmets back to the table to make adjustments. Some of the full-body suits had to modified into more traditional helmets, and many of the designs needed to address uneven weight distribution.

One student had a helmet that was just layers and layers of thick padding, but her egg fell out of the bike right away, never making it to the crash site. “Next time, maybe try making it smaller,” Pelletier suggested.

For some, though, all that was required was some marker to add a little flair and style.

After tweaks were made, students got another chance to send their helmeted eggs down the ramp. Most saw improvement, though there were plenty of egg casualties on this day, both before and after the adjustment period.

That was to be expected, though, which is why the eggs were hard boiled. Students were also allowed a second egg if theirs went the way of Humpty Dumpty, and quite a few did take advantage of that second egg.

The final phase of the project is this week, with the last day of it all coming Wednesday. Students will evaluate their eggs and determine what this would mean if it were a real person.

Although it’s a lesson that deals with things nobody ever wants to experience, the kids still thoroughly enjoyed themselves.

“I liked learning about concussions,” said Amy Desrochers, whose helmet design consisted of a thick layer of foam padding wrapped around the head from front to back.

“My favorite part has been making and testing it,” Gavin Buxton said of his Steph Curry creation.

“Making the helmet and learning about concussions and testing our egg on the big ramp,” was Sabine Karanouh’s favorite part.

All in all, it seemed to have been an entertaining and informative lesson, and it showcased the critical thinking and teamwork skills of the students – although each student had his or her own egg, collaboration and idea sharing were abundant at last week’s session we dropped in on. As were smiles, laughs, high-fives and screams of joy and/or disappointment.