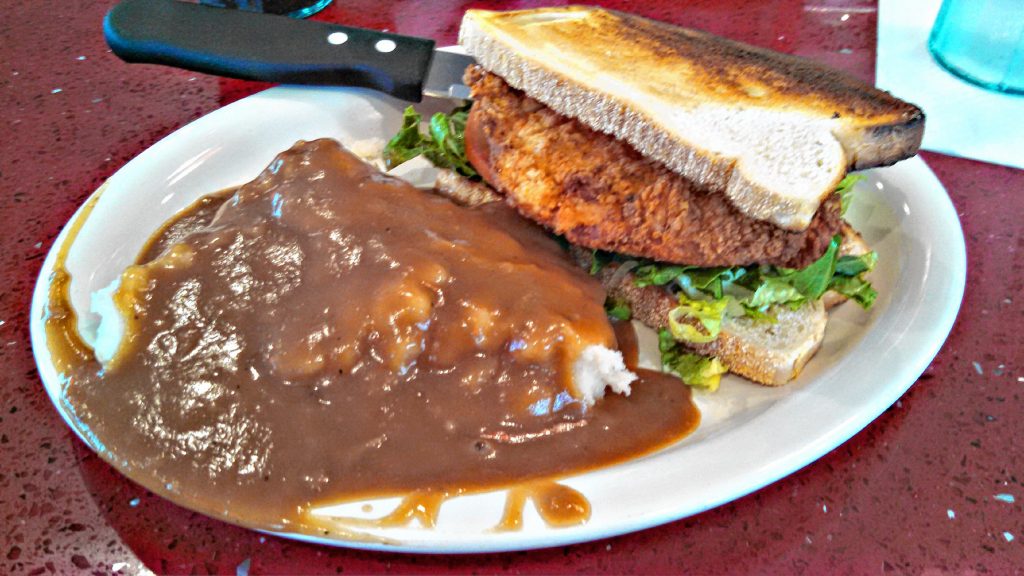 We ordered a spicy chicken sandwich with mashed potatoes and gravy from Red Arrow Diner. THE FOOD SNOB / Insider staff

It really has been a banner couple of weeks for The Food Snob lately.

First, there was the opening of Dairy Queen on Loudon Road, which meant we had to go try a burger and a Blizzard. Then, just a short walk down the same road a few days later, Red Arrow Diner opened its doors, which we assume have since never closed due to it being a 24-hour joint.

In true Food Snob fashion, we went over to check out the new place as soon as possible, in this case last Wednesday around 2:30 p.m., just past prime lunch hours, we figured.

That ended up being a serious error in judgment – the place was completely packed, with more than a half-dozen people waiting to be seated ahead of me. Since I was by myself, though, and didn’t mind a seat at the counter, I only had to wait about two minutes before I was able to grab an end seat at the counter.

The menu was huge – seven pages of options to pore over, plus a page of merchandise and a back page telling the whole story of the diner.

Even though they serve breakfast all day (same with lunch and dinner), I was really in the mood for some lunch, but one that would still be filling. There were 16 options to choose from in the Arrow’s Sandwiches section of the menu, and one in particular caught my eye: Spicy Chicken Sandwich.

Cleverly named, the meal included a spicy chicken sandwich on a bread of choice (sourdough) with blue cheese or ranch (ranch) and a side (mashed potatoes with gravy).

After about 15 minutes, my meal was served steaming hot. The pile of potatoes was huge and there was a boatload of gravy. The bread on the sandwich looked nice and toasty.

The first thing I dug into was the potatoes. I love a good, lumpy mashed potato and thick, rich gravy, and these were all of that and more. I almost just ate the whole portion before touching the sandwich, but I figured I should get on to the main course before it got cold.

The sandwich was very crispy and crunchy, thanks to a combination of well-toasted sourdough, fried chicken and fresh lettuce. It was also nice and hot, and plenty juicy.

It was not spicy. Not even a little bit. I wasn’t sure if they had accidentally given me a non-spicy one, or if they just have a dramatically different idea of spicy than I do, but I never noticed a hint of heat in the chicken.

That’s not to say it wasn’t good, though. This was still a very tasty sandwich overall, and it was seasoned well and didn’t have too much ranch dressing on it. It just wasn’t what I was expecting, in terms of the level of spice.

I never put the sandwich down after I first picked it up, so you won’t hear any complaints about it – all fried chicken is good, regardless of spice. This was a tender patty with plenty of flavor, and it was a pleasure to eat.

Then, it was back to the potatoes to finish off the meal. The sandwich wasn’t huge, but the hefty portion of mashed potatoes and thick gravy definitely made it a satisfying, hearty lunch.

Obviously, we’ve only just scratched the surface with the Red Arrow Diner. The big draw here is that it’s open all day, every day, and the entire menu is available at all hours, but all we’ve done here is eat a sandwich during typical lunch hours.

I have a sneaking suspicion that we might find ourselves back here sooner rather than later.