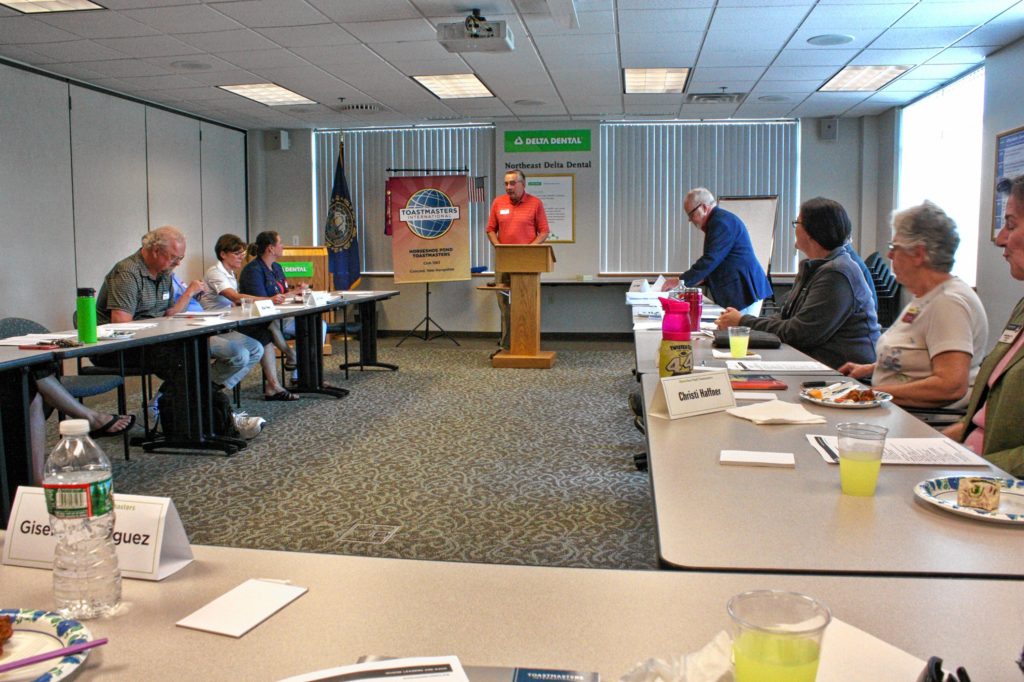 Tim and I like to think we can write a little bit (our bosses seem to think so, anyway), but when it comes to public speaking, we don’t have much experience.

That’s why we went to Northeast Delta Dental last Wednesday to sit in on a meeting of the Horseshoe Pond Toastmasters.

The group is part of the larger Toastmasters International, which teaches people all over the world how to be better public speakers and leaders. There are five different Toastmasters groups in Concord (most of which submit events to our calendar each week), so when we saw that the Horseshoe Pond group was holding an open house aimed at newcomers, we figured it was a perfect opportunity to go see what goes on there.

The main takeaway is that this is a punctual group. When I arrived I was handed an itinerary laying out the whole one-hour session. This was a very detailed sheet, with various portions of the session scheduled down to the minute – for instance, Toastmaster Joe Stehno called for some evaluators right at 12:08, making way for speaker Brian Power to present his speech right at 12:10, and not a minute later.

Each meeting follows a similar blueprint. Members show up already knowing which role they will play, whether that’s Toastmaster, Word Master, Timer, Table Topics Master, General Evaluator, Quiz Master, Speech Evaluator or Grammarian/Ah counter. Then the formalities begin, in which whoever is leading the session that day calls the meeting to order, goes over the docket and introduces the next person.

The meat of the session revolves around evaluating speeches. Last week, Power, a member for more than 20 years, gave a speech about impromptu speaking. He was closely evaluated by Sally Bird, who took copious notes on the speech as well as Power’s body language and overall delivery.

Meanwhile, the Grammarian/Ah counter, played by Charles Ansell last week, sat there tallying up all the times someone used a “filler” word such as “ah,” “um,” “well,” “so,” or “like,” among others.

Sitting next to Ansell was Giselle Rodriguez, who was the official Timer of the day. She operated a timer that had three lights on it – green, yellow and red – which serve as indicators to the speaker that time is running out. One of the key components of a good speech, I learned at the meeting, is keeping it tight and to the point.

After the two speakers made their speeches, the evaluators gave thorough and constructive reviews. Both evaluators were very cordial and courteous, and never did it seem like anyone was talking down to or insulting anyone else.

All in all, the group is about trying to make each other better. Everybody is allowed to give little tips here and there to everybody else, and ask questions about why they did certain things. It was a very positive and constructive environment that was very well organized and structured.

By the end of the meeting, it was hard to believe that an hour had passed.

The Horseshoe Pond Toastmasters meet every Wednesday at noon at Northeast Delta Dental on the second floor. Anyone is welcome to drop in any time, but there are some fees if you want to become a member.

For more info, go to horseshoepond.toastmastersclubs.org or call Joe Kasper at 223-1287.