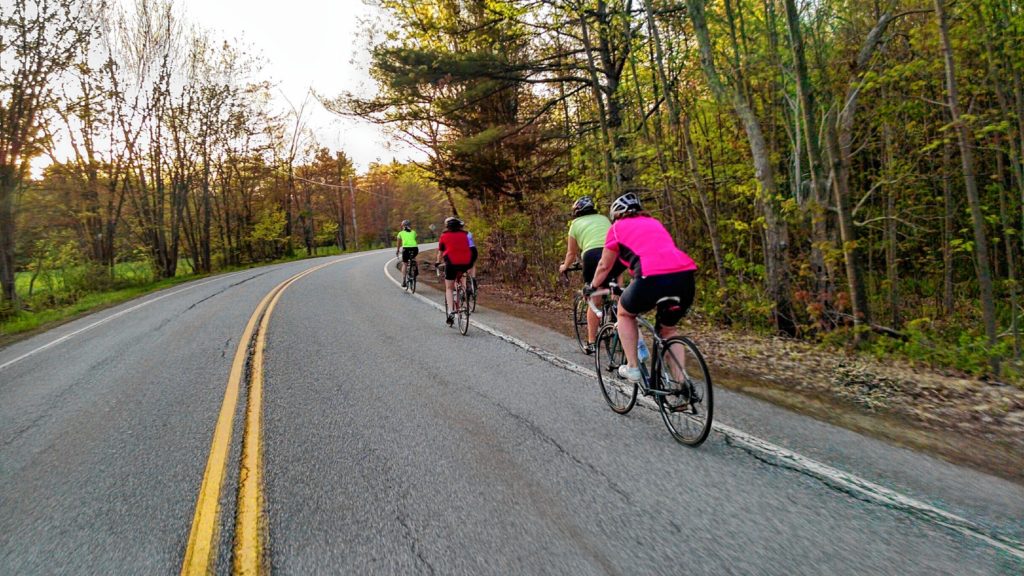 Women take part in the S&W Sports Women's Road Ride last Tuesday night. The group meets every other Tuesday night at 7 for some cycling. Courtesy of Andrea Pirkey

If you have a bike but nobody to ride with, today is your lucky day.

No, we aren’t going to come meet you somewhere for a ride, but we found some groups that are all about that kind of stuff, and we figured we’d pass the info along to you.

Now that the weather has really warmed up and it’s staying light past 8 p.m., it’s time to get out there and start covering some miles on the bike. We checked in with S&W Sports – which acts as sort of a home base for the Central New Hampshire Bicycling Coalition – last week to find out about all the rides and events people can get involved in.

S&W officially puts on two regular bike rides. There’s Friday Night Lights, which takes place – you guessed it – on Friday nights at Bow Town Forest. This is a nighttime mountain bike ride, and participants should bring some type of light with them.

There’s also the Women’s Road Ride, which takes place every other Tuesday night starting at 7. As its name implies, this ride is for the ladies only, and it just began last week.

“We’re also trying to put together a unisex road ride,” said Tim Farmer, owner of S&W and treasurer of the CNHBC. That idea is very much still an idea at this point, so don’t hold him to it just yet.

A separate but well-known and established cycling group – the Granite State Wheelmen – also does a regular ride. GSW meets in the vacant lot across the street from S&W every Wednesday night – just show and go.

The CNHBC is active in the cycling community, but it doesn’t technically host any “rides” at all. The coalition puts on many “events,” which may or may not include riding a bike. (The terminology has a lot to do with insurance policies and other legalese.) The next CNHBC event will be a Bike Rodeo at the Steeplegate Mall on June 3. That event is for kids to come out and have their bikes and safety equipment checked out by some cycling pros.

There will also be another big CNHBC event at S&W in July: the back-to-school edition of the Bike Swap. This year’s bike swap went down this past weekend, but the next one, which will also be in the parking lot of S&W, will be July 29. This will be a huge consignment event in which people will donate or consign their bikes and others will buy them. The bike swap events are big fundraisers for the CNHBC.

The most important thing for any cyclist looking to stay in the loop about rides, events or other biking news is to check out some social media pages. S&W updates its Facebook and Instagram pages daily, so follow them to stay up to date on the latest bikey happenings. It’s also a good idea to check out swsports.net and cnhbc.org, or call 228-1441, which is the number for both.