The Concord Chorale loves to sing for others

Home » Articles » The Concord Chorale loves to sing for others 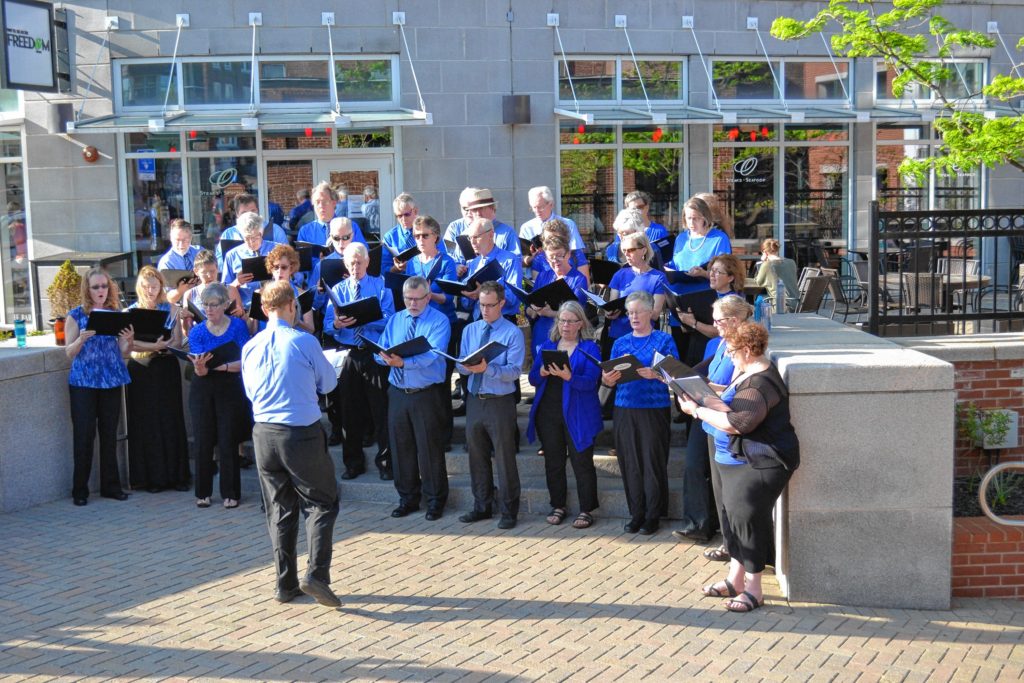 The Concord Chorale put on a flash-mob style show outside O's and Red River on Friday. Tim Goodwin

If you happened to be on South Main Street in front of O Steaks & Seafood and Red River Theatres last Friday a little before 6 p.m., you were one of the lucky few to catch a little show from the Concord Chorale.

Since they are a group of people who really like to sing, somewhere along the way someone came up with the idea for a community service day – full of singing.

The chorale used to do singing Valentines all over the city, and it gave them – and the public – a chance to see and hear them outside of the traditional concert format.

But those did not happen this year, and the group was itching to get out in the community.

So people took vacation days (and maybe some played hooky) on Friday and spent the entire day traveling to retirement homes like Granite Ledges, Pleasant View, Havenwood and the Merrimack County Nursing Home.

They also went to the New Hampshire Veterans Home, the Friendly Kitchen and Rundlett Middle School.

Then in the evening, they all came together to put on the show in that little plaza outside O’s.

“We decided as a way to give back to the community, we’d take a day to sing,” said Meredith Funston, chorale president. “It was just a nice thing for us to be able to do.”

The chorale was split up into three groups of about 12 singers each to cover as much ground and reach as many people as possible during the day.

“It was a different kind of repertoire than what we’d do in concert,” said Elibet Chase, who handles communication for the chorale.

And the stories that came out of the day is what made it all worthwhile.

There was one couple that couldn’t make the big sing at Havenwood, so the group went to their apartment.

“We had to go to places that had the flexibility to have a group come in,” Chase said.

After singing at Rundlett, the students put on a show for the chorale members.

Since their latest season is sadly over, it gave them all a chance to come back together before the summer months and get one last good sing in.

“It was amazing,” Funston said. “You could see how much fun everyone was having.”