The Holiday Food Basket Project is back

Home » Articles » The Holiday Food Basket Project is back 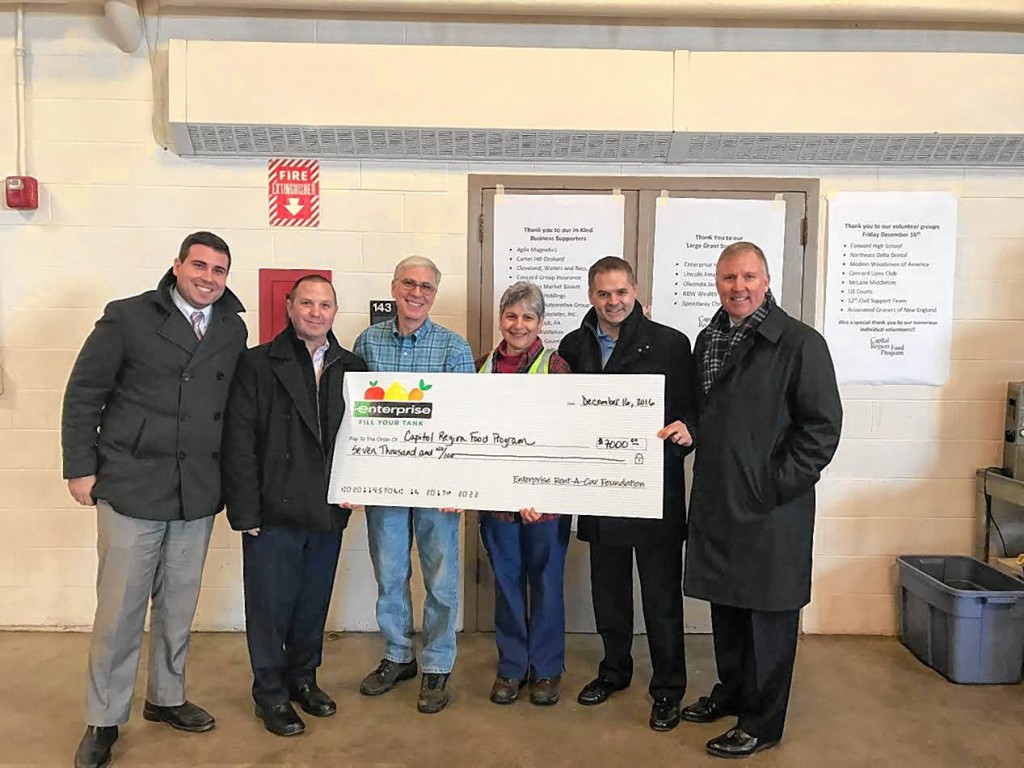 Maria Manus Painchaud has been a mainstay with the Holiday Food Basket Project for many, many years. 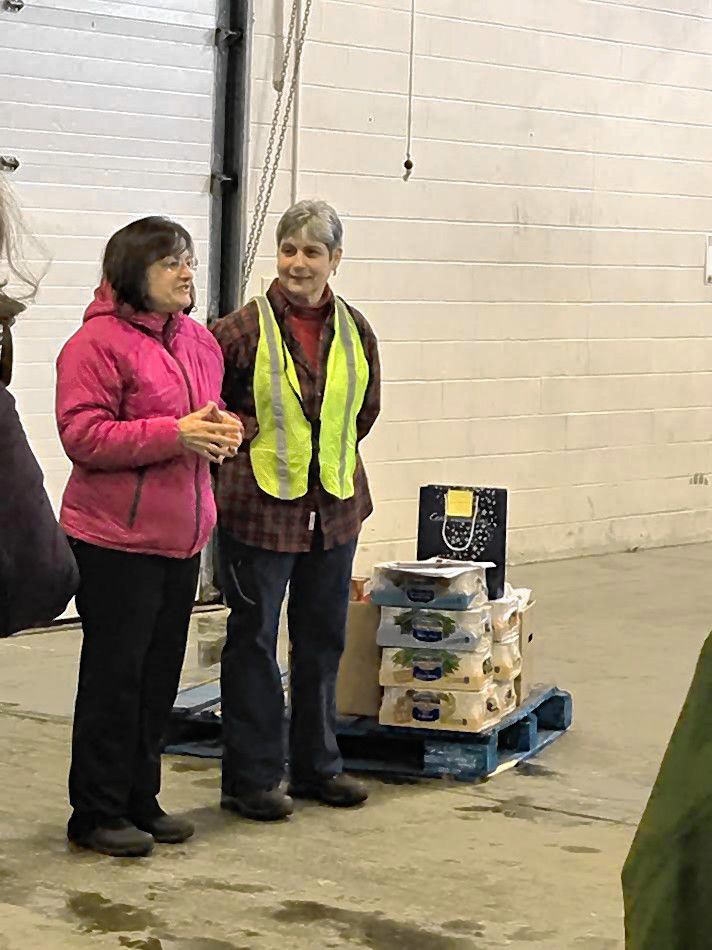 Maria Manus Painchaud (center right) accepts a nice donation for the Capital Region Food Program from Enterprise during the start of the holiday food basket project.

The Capital Region Food Program’s holiday food basket project kicked off last Friday, and it’s been an all-hands-on-deck approach ever since to make sure all those boxes (almost 5,000 of them) get packed up and into the hands of the people who really need them.

You might remember that Tim volunteered last year, filling boxes for a shift, but this time around we caught up with project chair Maria Manus Painchaud, whose father began the project more than four decades ago, to get all the details on the history of the project, how it works and the effort it takes to complete.

How many years has the program been going on? This is the 43rd annual holiday food basket project. This project started out as a joint effort between the interfaith council of churches, St. Vincent de Paul Society and the Greater Concord Chamber of Commerce. The CRFP was incorporated as a New Hampshire voluntary nonprofit organization in 1984. Prior to that time, the holiday food basket project was done under the umbrella of the Greater Concord Chamber of Commerce.

What was the reason behind your father starting it? In 1982, it was recognized that the need had grown to more than just at the holidays. As a result, Mark E. Manus, former chamber president, and several other civic leaders arranged to establish the Capital Region Food Program as a separate 501(c)3 nonprofit organization. The organization received its advanced ruling from the IRS on May 17, 1984. From the start, the organization has been 100 percent volunteer-driven. This has remained intact since its inception. Mark’s family had been in the restaurant business, the Sterling Restaurant open 24 hours a day, seven days a week, and located where Rowland’s Studio now stands. As a child he would go to the restaurant before school. During the depression and the years after, he saw people in need and how his family would make sure people got a meal. He always was sensitive to hunger and also wanting to respect people’s sense of pride.

How many families did the first one serve? In 1974, less than 100 families were served in Concord only. They received a box that provided a nice holiday meal. Now families receive the box for the family meal and a second box of nonperishable items that help sustain a family of four to up to two weeks.

How much do you look forward to the program each year? Our family is involved in CRFP’s holiday food basket project as well CRFP’s year-round distribution project, so CRFP is in our minds throughout the year. The holiday food basket project has special meaning to many people throughout our communities. For our family, it helps us keep Mark’s vision of volunteerism and community spirit alive. It is what makes our holidays special and meaningful, knowing in some small way we have given back.

Does it take a long time to plan for or is it a well-oiled machine by now? The one thing that CRFP has prided itself on is not being complacent. Every year we debrief and identify areas for improvement; we pay attention to what is happening in the economy, society, schools, healthcare, government funding and anticipate how that will affect our numbers. The model works well, but we are constantly reviewing to see if there is a better way. When the program started there were limited to no options for food at the holidays, that has changed over the years; there are more food pantries, soup kitchens and social service agencies. The board is always concerned that we make sure we are meeting a need and not just racking up numbers. We have re-engineered several times in an effort to address the changes from the external environment.

How many volunteers take part each year, and how many days/hours does it take to put it all together? Over 1,000 volunteers are used during the holiday food basket project. We have 13 satellite locations that we bulk deliver to so that they can in turn deliver within their communities. The project runs 10 days and during that time we are looking at roughly 92 hours. The number of man hours would be approximately 2,700. We have one prep day, then five days of production, two days of delivery, one day of emergencies, and then one cleanup day, which also includes a year-round distribution. The CRFP holiday food basket project committee does the debrief in January; by May the incoming committee has been pretty much established. The organizational meeting is in August and then the committee meets every three weeks until December. There is a lot of subcommittee work during that time also, so add those hours and people into the number and we have another 250 hours of committee man power but that does not include outside events in support of the holiday food basket project such as marketing events, city council meeting, the chamber’s business after hours, school presentations, etc.

Does it amaze you how this comes together each year? I marvel at the magic and power of collaboration, cooperation and coordination. Building M on the National Guard Military Reservation is where we execute this program. This is the 34th year we have partnered with the National Guard. There are now four generations that come to volunteer. People who don’t connect any other time during the year make sure they volunteer on the same shift so they can give back and then celebrate the season with a special event after. When you walk into the drill hall two days before the program, the floor is empty but for the guard items. The day before the program, we receive two tractor-trailers of purchased grocery items from Market Basket. The 4,500 to 5,000 boxes that need to be made up are brought in on pallets, donated food starts to arrive, and there is a sense there will soon be activity. The first day of sorting the food, more donated food arriving, the blessing ceremony and making up over 4,500 boxes is a busy day. We start to see every inch of the floor being used. Then the first wave of standards are done on the second day. The third day starts with the completed standards being palletized and then the second wave is laid out and filled. The fourth day, the second wave of completed standards are palletized and then the first wave of custom boxes are completed. The fifth day, the second wave of customs are built right on top of the first wave. By the end of the day, all customs, all standards and all specialty boxes created for the New American population are done and ready for delivery. Staging and prep for delivery is done at the end of the fifth day. On the sixth day, which is always Dec. 22, we start at 5:30 a.m. prepping and loading the satellite deliveries. All satellite deliveries are on their way to the respective sites by 9 a.m. At 9:30, we start recipient pickup for people from Concord or Penacook who choose to come and pick up. Then on the seventh day, always Dec. 23, we stage at MVHS for the Penacook deliveries and we deliver out of the armory for the Concord deliveries. At the end of the day on the 22nd, more than half of the product has been delivered.

What kind of contributions do food drives make to this project? We typically receive between 8 and 10 tons of nonperishable items.

Are there monetary donations as well, and if so how are they used? Yes, the CRFP goes out once a year fundraising. We raise about $130,000, of which we spend $98,000 on the basket project and another $65,000 on year-round distribution. The difference is made up through grant requests. One hundred percent of every dollar contributed to the organization is used to purchase food. Any supplies, services and expertise needed are provided as in-kind donations or services. Because we are all-volunteer, there are no paid staff, no administrative costs and money is used to purchase food only.

How many boxes will be distributed this year? We anticipate distributing around 4,800 boxes.

How many people will this benefit? Over 7,500 individuals.

How long is the food expected to feed a family in need? There is enough food for a wonderful holiday meal and up to two weeks of meals beyond the holiday.

How do all the boxes get delivered? All volunteers! We ship out to the satellites so they can deliver in their areas.

If you had to buy all the food for the holiday basket program, how much do you think it would cost? Regular retail cost of food for what is distributed, approximately $150,000. Now add to that if we had to pay for all the supplies, transportation, staff, etc., add another $250,000.

How does the Capital Region Food Program help area families the rest of the year? During the holiday food basket project, we deliver directly to the recipients. The rest of the year we work with our partnering agencies and purchase case loads of food then give it at no cost to those organizations, who are working directly with the recipients. We don’t duplicate effort but instead work to support. Our year-round project has grown from its inception in 1992 of representing 10 percent of our budget to now over 40 percent. This is the area that keeps growing and the board is looking at ways we can continue to be impactful and even more so.

How can people help out? Monetary donations are always welcomed to help us continue with the level of commitment to our year-round project. Have a food drive – we can then distribute the food through our year-round distribution project. And sign up to volunteer.

When does volunteer registration begin for next year? We always open registrations on Nov. 1 and have to close them on the Nov. 30 to prepare the master schedule and get the master list of names to security at the guard. It is a daunting task to schedule 1,000 volunteers in a 10-day period.