Welcome to the 2016 Insider Summer Olympics 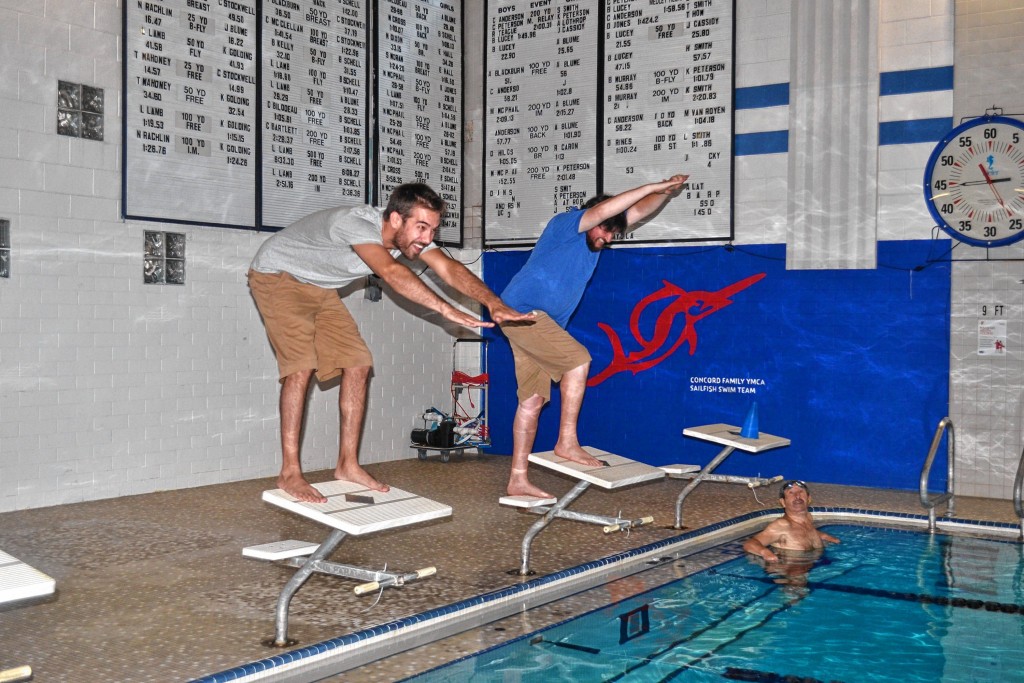 LOW DIVE: Since we couldn’t find a high dive in the city, and not that there’s a chance we’d choose to dive into a pool from 10 meters above anyway, we elected to compete in the low dive at the Concord Family YMCA. And to spice things up a bit, we elected to do it at the same time. For full disclosure, we didn’t actually dive in the pool, but since Jon actually made it all the way to the top of the starting block, he won gold by default. Although it was probably a pretty close point total by the judges because Tim’s form is on point. We even had a fan during our competition. Now we know how true Olympians feel. (Courtesy) 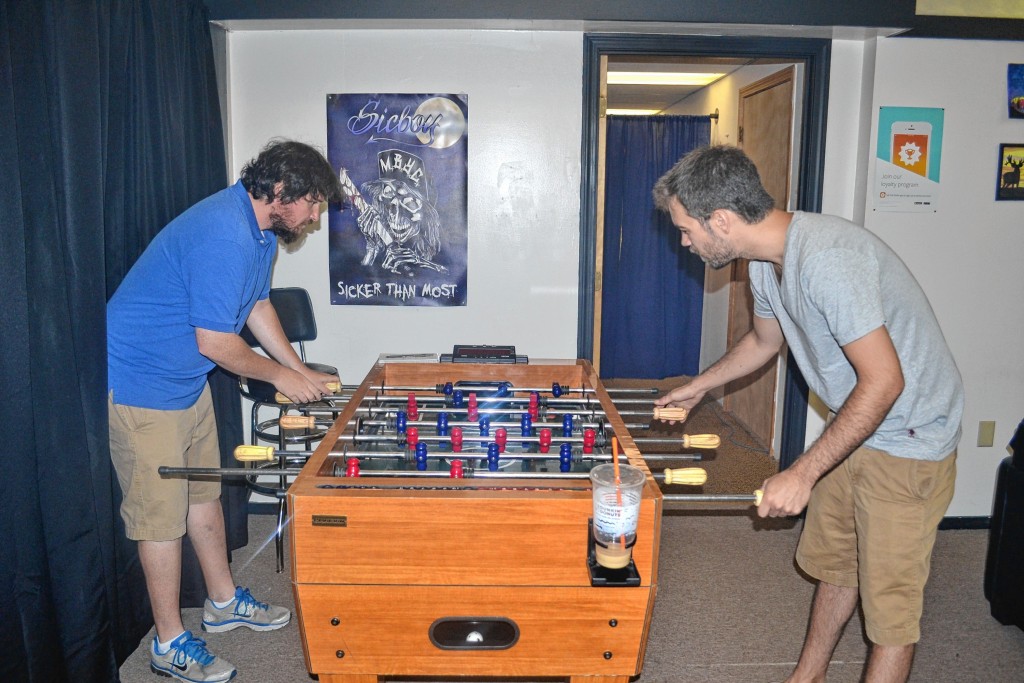 FOOSBALL: Now we realize that foosball is not an Olympic sport, but we weren’t about to play a one-one game of soccer. Do you remember how hot it was last week? So we opted to enjoy the comforts of SubStyle Vapors on North Main Street. But instead of playing to the traditional score of 5, we thought it would be better to represent the city we cover with a little game of CONCORD. We split the first six goals before Tim took control with four straight to take the title. 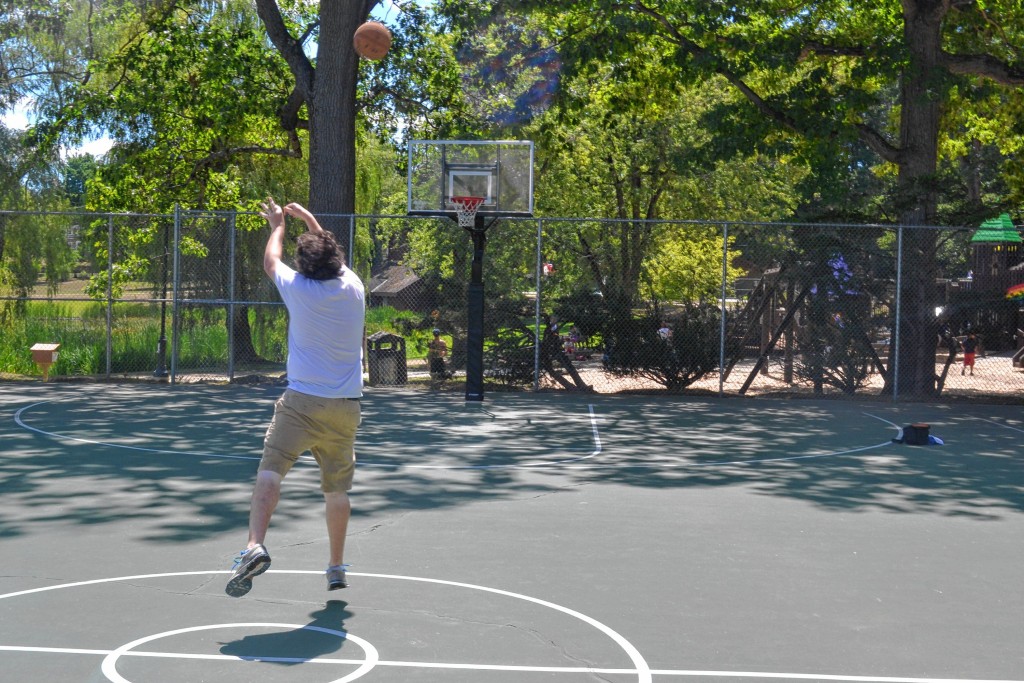 HALF-COURT SHOT CONTEST: Again, there was no need to be running around in 90-degree heat playing one-on-one in basketball at White Park. Something tells us the paper would be down one Insider for a while. So the next best thing was a half-court shot contest. After some warm-ups – where Tim hit one – the real competition began. Alternating shots, since it was a race to see who could hit the first one, it took six heaves from the midline before Tim swooshed one in. With that form, it’s surprising it took him that many to make one. (JON BODELL / Insider staff) 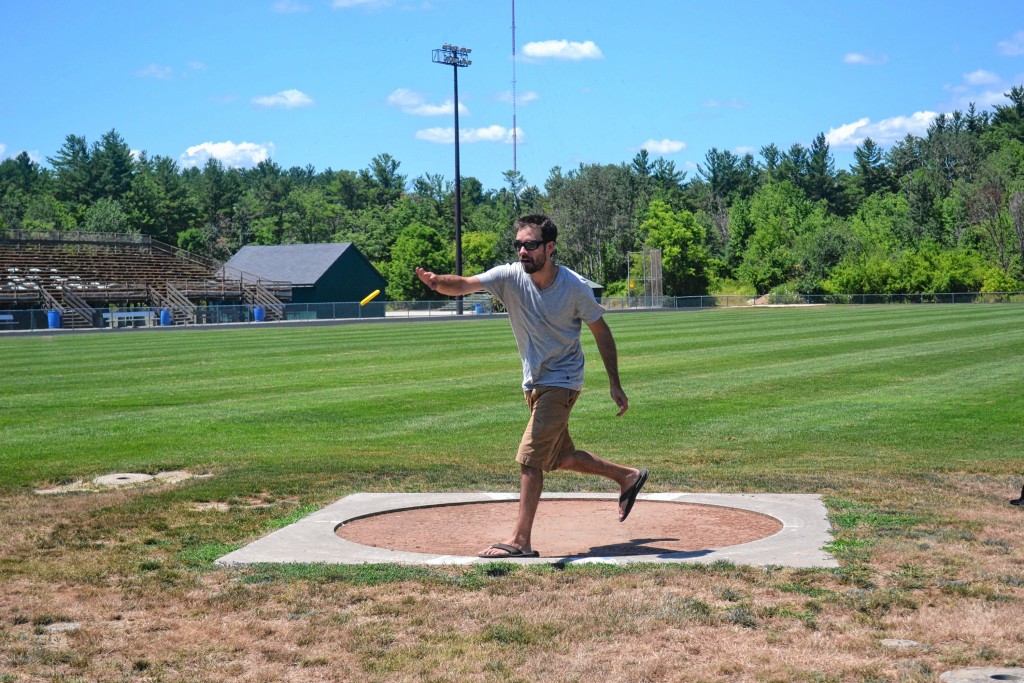 FRISBEE DISCUS: We couldn’t do a summer Olympics issue without including track and field, but had no desire to run. When we got to Memorial Field there were signs to keep off the grass, so we decided to use a small yellow Monitor Frisbee and do our own variation of the discus. We stood in the official discus circle, made one complete turn and flung it as far as we could. And unlike the Olympics, we counted the roll. Using our trusty toe-to-heel measuring technique, Jon went for a whopping 43 feet, while Tim was right behind with 21 feet. (TIM GOODWIN / Insider staff) 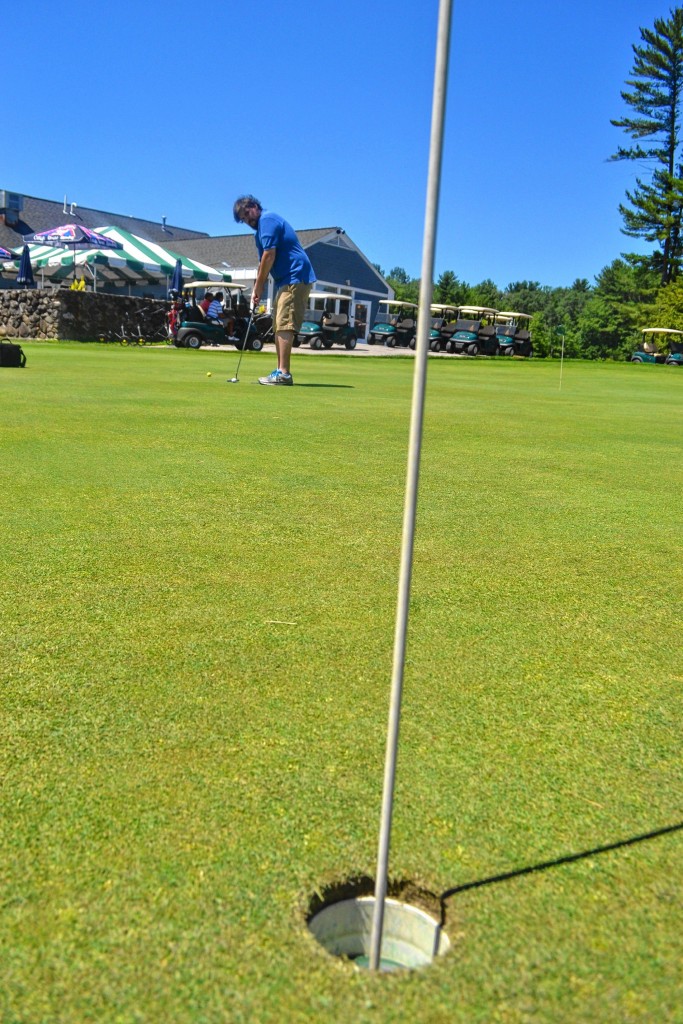 PUTTING: Sure, we could have spent a day out on the course at Beaver Meadow, but who has that kind of time during the work day? So we borrowed a putter and two practice balls from the clubhouse and took to the practice green for a best out of six from 21 feet away. Jon went first and while he was close, went 0-for-6. Tim, on the other hand, was feeling it, going 3-for-6, including knocking in his fifth putt with his sixth shot. (JON BODELL / Insider staff) 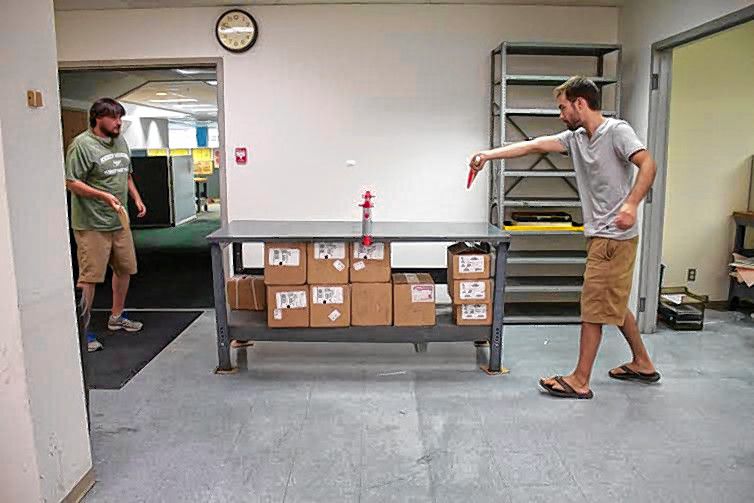 TABLE TENNIS: Armed with a net, paddle and balls bought specifically for the Insider Olympics, we made use of an old steel table near the press room and took part in a little office ping pong. Sure, it wasn’t regulation, but it more than fit what we were looking for. Jon took an early lead, winning three of the first four points, but much like the end of the foosball match-up, Tim dominated down the stretch, scoring the final six points, including an epic shot high off the wall that, upon further review, was ruled in play. (ELODIE REED / Monitor staff) 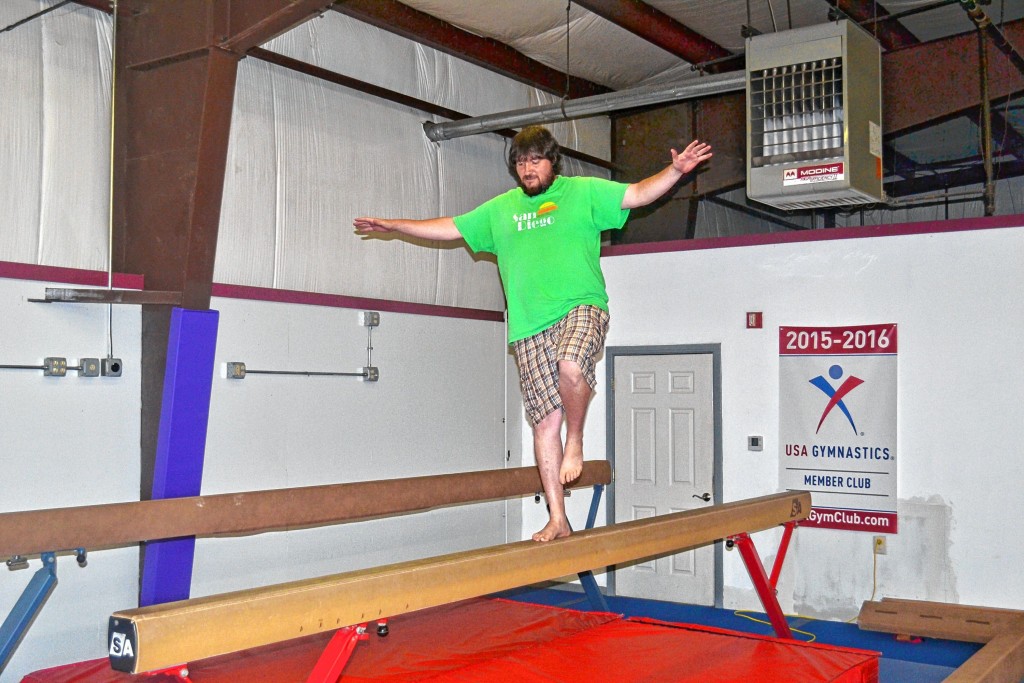 BALANCE BEAM: Since neither one of us could flip around or do much of anything on the beam (it was hard enough for Tim to just get on it), we elected to see who could balance on one foot the longest. Jon went first and kind of gave up after 54 seconds, thinking the win was in the bag. But Tim had other plans, going for a minute and 10 seconds to snatch yet another victory. (JON BODELL / Insider staff) 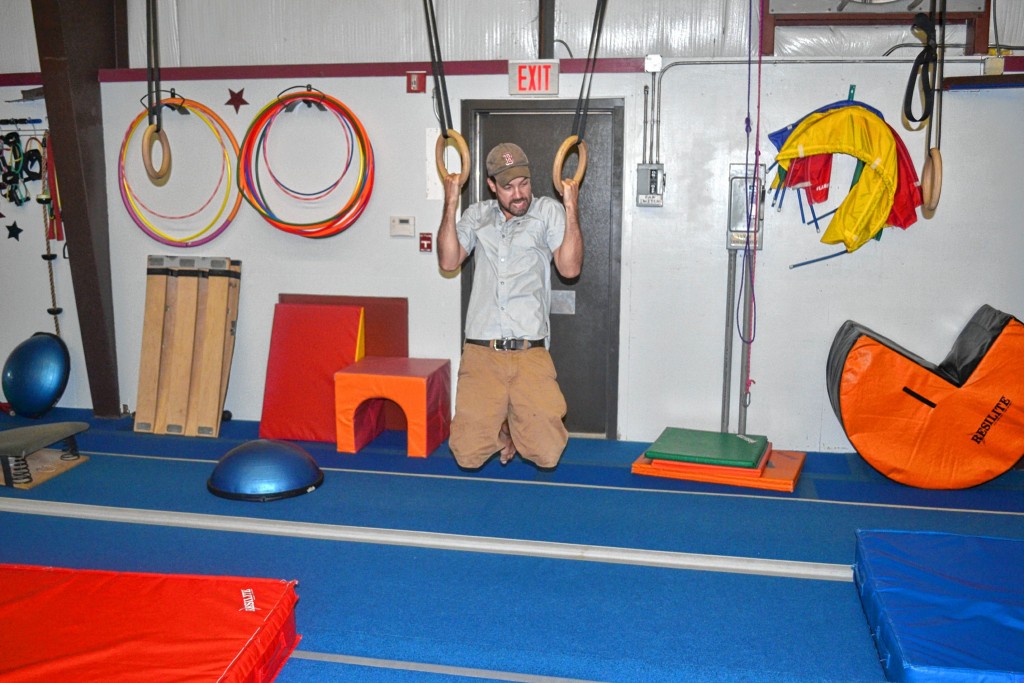 This wasn't an official event, but Jon couldn't help himself from doing a little hang job from the rings at Flipz Gymnastics. (TIM GOODWIN / Insider staff) 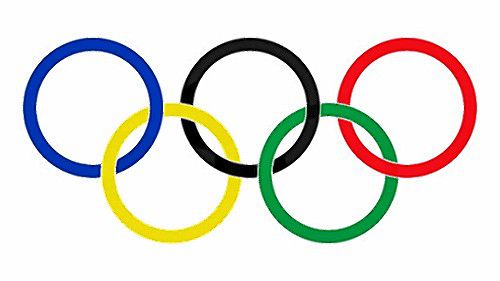 With the Summer Olympics set to kick off Friday with the opening ceremonies in Rio de Janeiro, we thought it would be a great idea to take part.

No, we’re not taking an all-expenses-paid trip to provide weekly updates in the Insider for the XXXI Olympiad, and it’s safe to say that we didn’t qualify for any of the events because that kind of info would have been plastered all over these pages for weeks.

Instead, like we did way back in February 2014, it’s time for a little Insider Olympics fun.

Sure it might not be as competitive or meaningful as the actual games, but make no mistake, there was a lot of pride on the line last week.

Over the next few pages, enjoy the sights as you see what transpired when Jon and I locked horns in seven events to see who has athletic bragging rights in the Insider pod. (And we all know who holds the title in the eating department.)

Using the summer games as our guide, we criss crossed our way around Concord in an athletic battle that will be remembered for many years to come – at least by us anyway.

It’s not every day that we get paid to putt a golf ball, balance on one leg or set up table tennis in the office – we’re more used to eating good food and drinking tasty beer.

But the Olympics are only every four years (at least the summer ones) so we had to play it up right.

Now, with any luck, we’ll join the ranks of Tara Mounsey or Douglas Everett as the best olympians in Concord history, even if there’s was actually done on the true world stage and ours was in front of complete strangers who happened to be passing by. You better believe they got a good show.

So take a look at what we came up with.