Students get water-crafty with cardboard 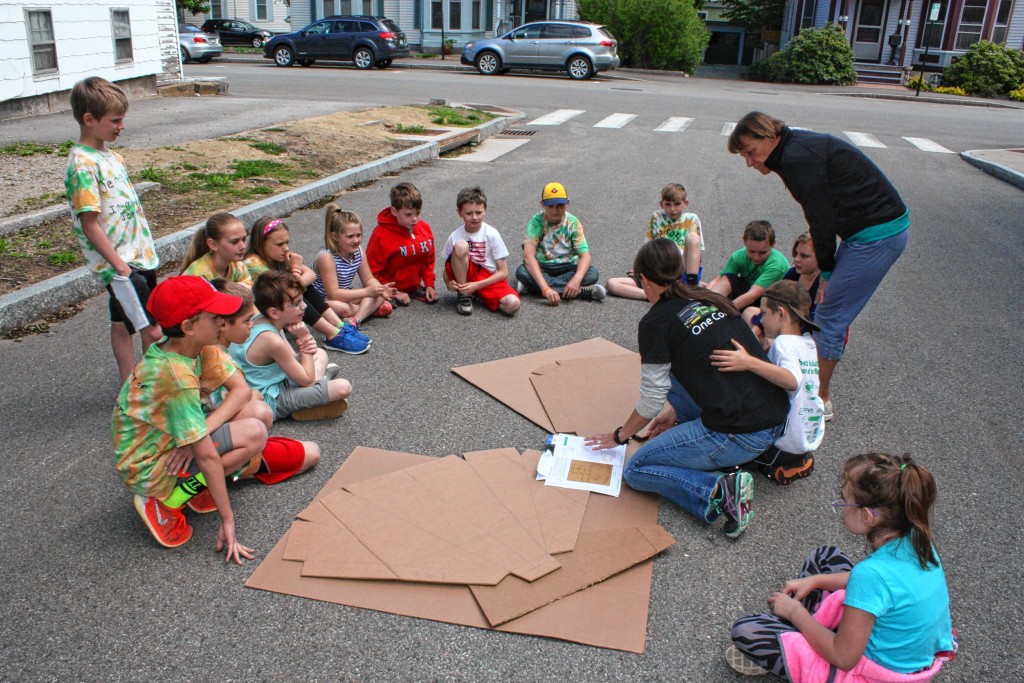 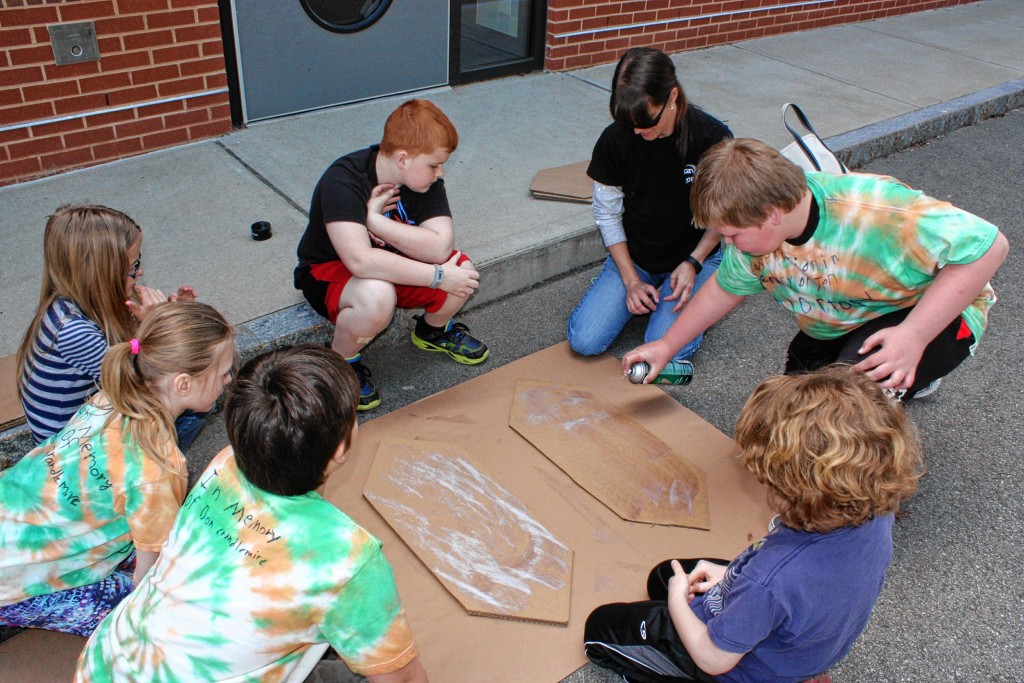 Gage Hamel (right) applies some spray adhesive to some cardboard panels while volunteer, engineer and parent Claire Lund keeps an eye on things. The students were very interested in the gluing process, as you can see. (JON BODELL / Insider staff) 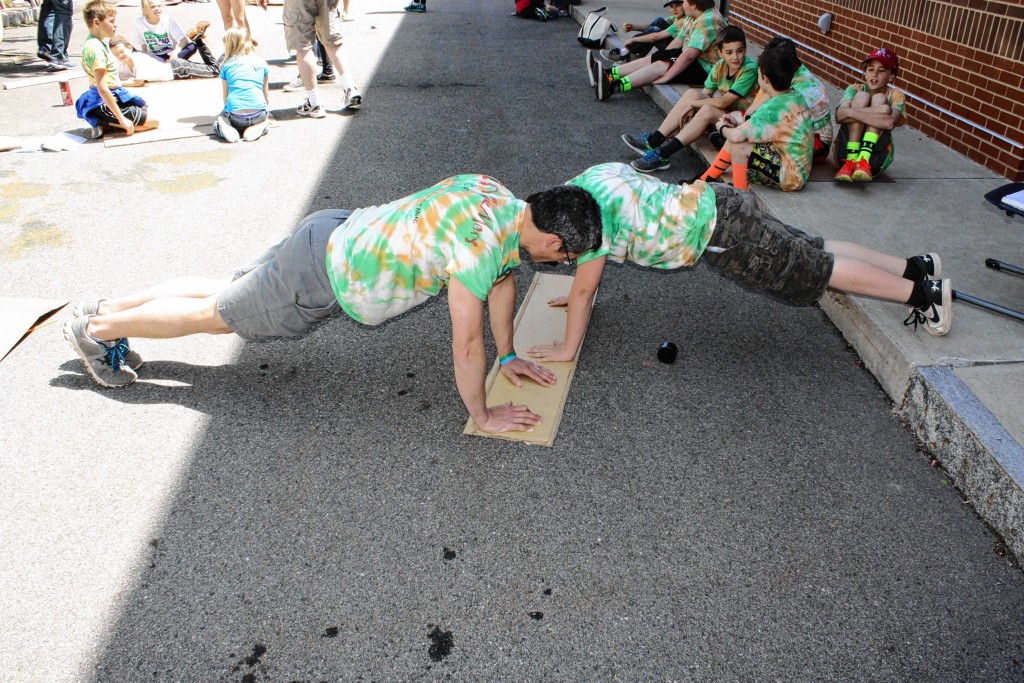 Fifth-grade teacher Mike Pelletier does pushups on top of some glued-together cardboard panels with the help of a student. (JON BODELL / Insider staff) 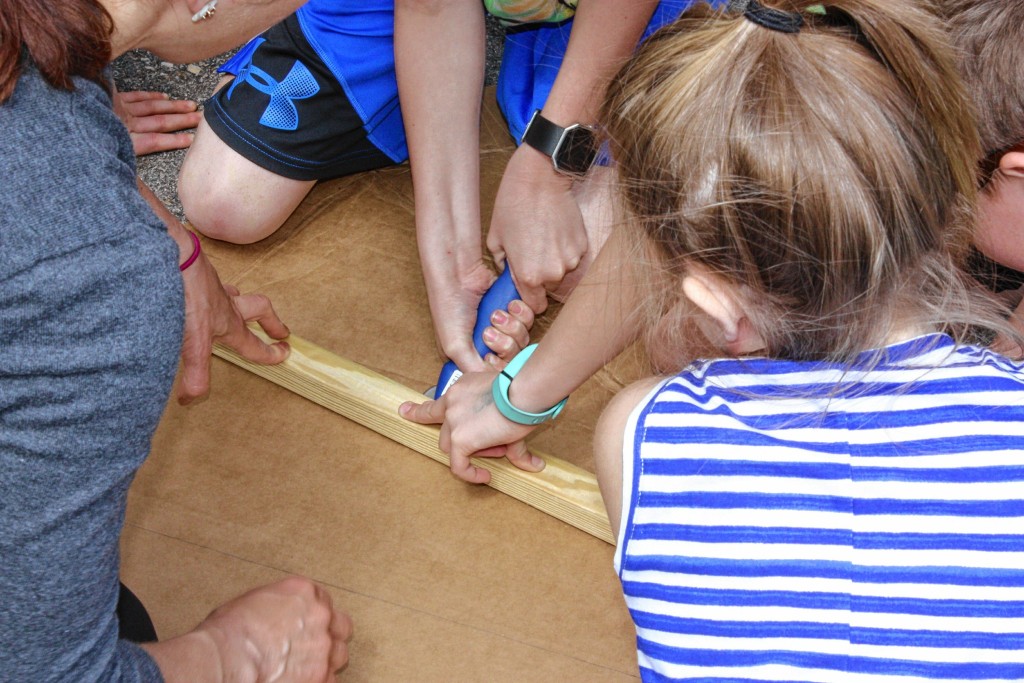 Here’s what this project is all about: teamwork. One person creases the board with some roller device while others help hold everything down. (JON BODELL / Insider staff) 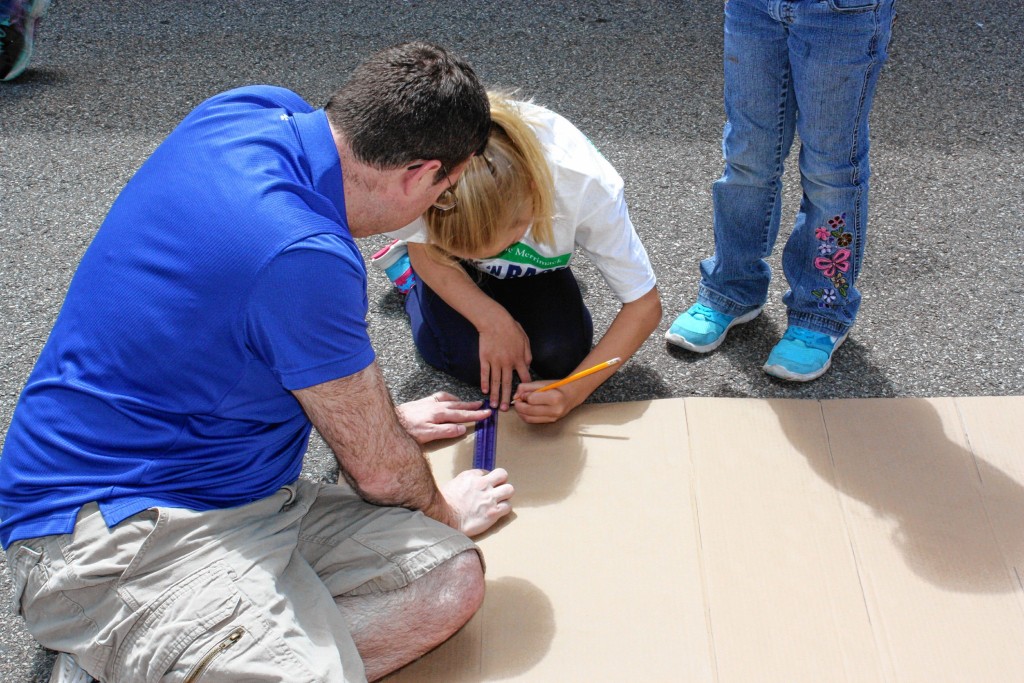 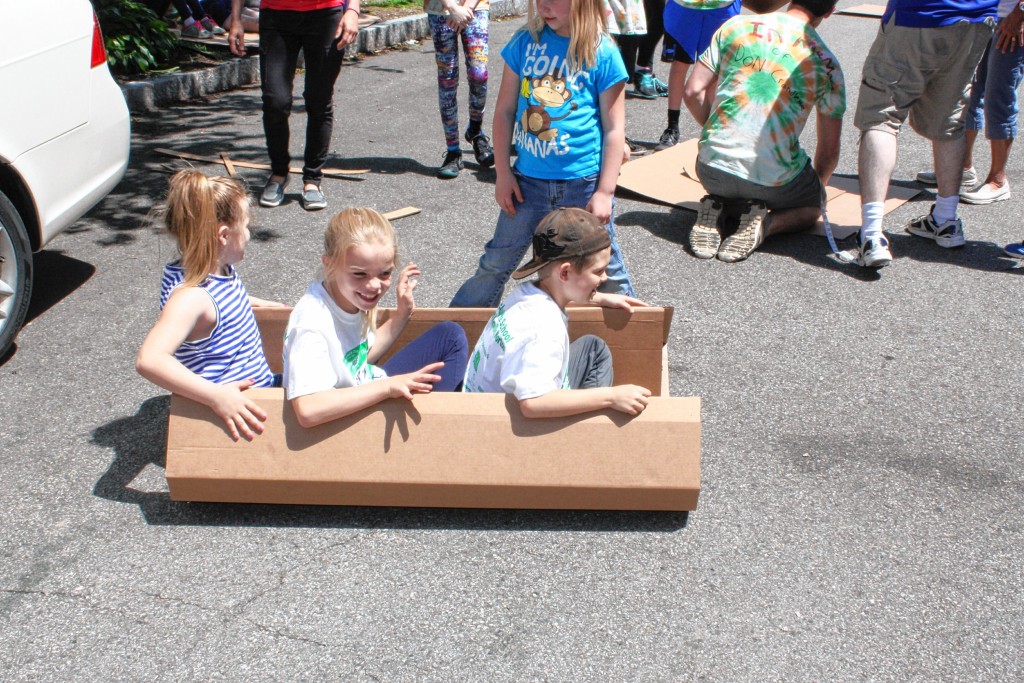 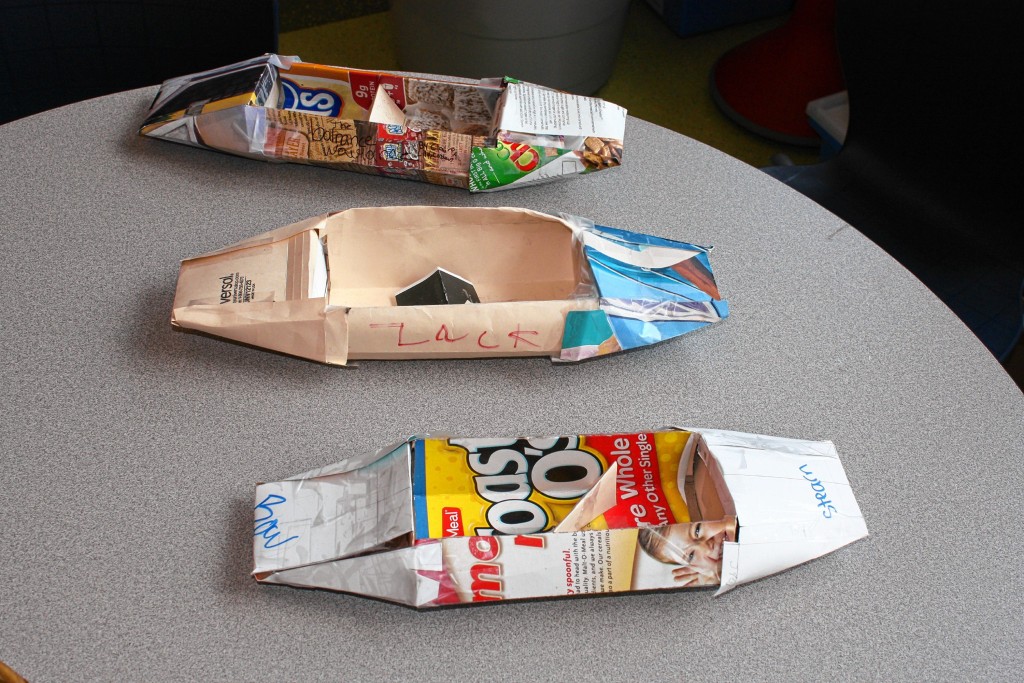 Students made these 1/16 scale boats a few weeks ago, before starting construction on the full-size boats. (JON BODELL / Insider staff) 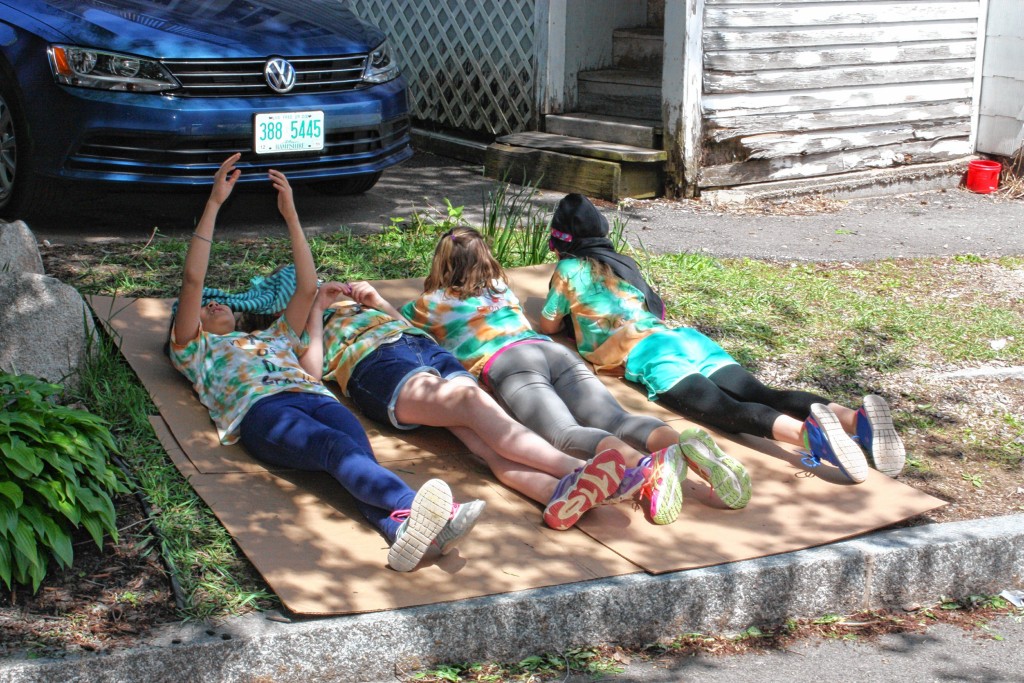 Some students took a little break in the shade after working on the boats under the hot sun. Hey -- work hard, play hard, right? (JON BODELL / Insider staff)

Students at Christa McAuliffe School are up to something crafty – watercrafty, that is.

By that we mean they’re making real boats out of cardboard – well, the boats have been made but they just need a finishing touch in the form of a protective coating. The goal is to launch the boats into Squam Lake at the end of the school year and see how their craftsmanship turned out.

Third- and fifth-grade students at the elementary school started working on the project in late March, when Peter Beckett came to the school to talk about boat building. He brought a full-scale model in to show the class, and they weren’t convinced that it could float – let alone support the weight of two of them.

The fist step in the process was making 1/16 scale model boats out of cereal boxes, which the kids had a good time with and did really well with, said third-grade teacher Bonnie Larochelle.

The kids had six sessions learning about and building the mini boats, and they worked in groups of three.

“The mini ones were actually more challenging to build,” Larochelle said. That 1/16 scale meant all measurements had to be taken down to the 16th of an inch – quite the task for a bunch of youngsters with no shipbuilding experience whatsoever.

It’s a different story with the full-size boats, which will be able to float with two students aboard. The big boats use, obviously, bigger pieces of cardboard that are a little harder to bend and fold.

The construction of the large boats – which finished late last week – required some tools: some straight pieces of wood for creasing the cardboard, spray-on adhesive to stick panels together, some box cutters (used by adults), pencils and rulers, among other things.

Leading the way on the construction side of things were Claire and Josh Lund, parents, volunteers and engineers. That last part is important.

The Lunds have been volunteering their time to teach the kids a thing or two about engineering and construction, two skills that are strongly in play for this project.

“They’re really the masterminds behind it,” Larochelle said.

And they’re not the only pros who were called in on this project. Back when the students were getting ready to start the mini boats, architects from Warren Street Architects came in to talk to them about scale and how to apply it in this project.

Before you know it, these kids are going to be the ones teaching the lessons.

But for now, they’re as energetic and enthusiastic about the project as anyone could imagine. In fact, during a build session last week, sometimes the enthusiasm boiled over to the point where impromptu games of tag broke out, much to the dismay of the supervisors.

Larochelle, the Lunds and Mike Pelletier, a fifth-grade teacher, are the adults who helped the kids with the construction side, but they really were there for guidance more than anything else – the students were the ones really doing all the big work (no disrespect to the very helpful and nice adults overseeing everything).

But they didn’t mind getting a helping hand or two from the grown-ups, especially when it came time to fold a thick piece of cardboard or cut one with a really sharp knife.

Some things they could handle just fine on their own, such as the gluing. There was some excellent spraying technique on display, and everyone was eager to employ their own method of applying pressure to the bond to help it set up.

Some students went with the sit-on-it method – in some cases it was two kids sitting on one small section of glued-together cardboard panels. Others, like Pelletier, went with the do-pushups-on-it technique, which had the added benefit of getting jacked while contributing to the boat.

No matter the technique, everybody – students and adults – worked together like a well-oiled machine, and seemed to have a genuinely good time doing it, too.

“They’ve been engaged,” Larochelle said. “They learn to work with all types of people.”

And that’s a big part of what this is all about.

Sure, it’s cool to make a boat out of cardboard, but it’s the process leading up to that launch that’s most valuable for the kids. Not only does it get them working with their hands – and minds – but it gets them working together, solving problems, figuring things out and having a good time.

Plus, mixing third- and fifth-graders together is a good learning experience for both groups, Larochelle said, as it teaches them to sort of work across the aisle.

The project has been such a success so far that there might be another go of it next year at some point.

“They want us to do it again next year, and hopefully we can be at the regatta,” Larochelle said.

The boats are virtually 100 percent cardboard, with just a little bit of spray glue here and there. Before pushing into water, the whole thing will be coated with a polyurethane to make it waterproof – these boats are supposed to be able to last for years once properly waterproofed.

Then, it all culminates at Larochelle’s end-of-the-year celebration in Ashland.

The goal is to have everyone head up to the lake house at the end of the school year where they can launch their boats and enjoy the fruits of their labor.

The boats can hold 120 pounds, so students will pile in two at a time and paddle out like a canoe and see how it goes.

And whether they sink or float, the goal of working together and learning something has already been achieved, and in a fun way.

Can’t really complain about that.