Before sap starts flowing from the maple trees, you’ve got to tap

There’s a lot of work that goes into syrup!

Home » Articles » Before sap starts flowing from the maple trees, you’ve got to tap 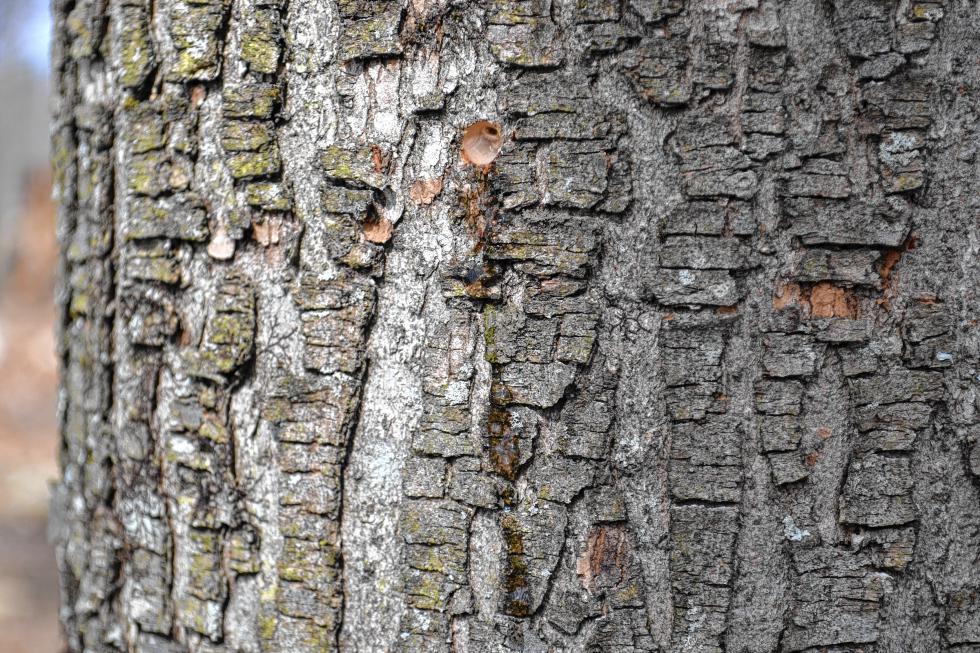 If you look closely you can see the sap dripping out of the tap hole. (TIM GOODWIN / Insider staff) 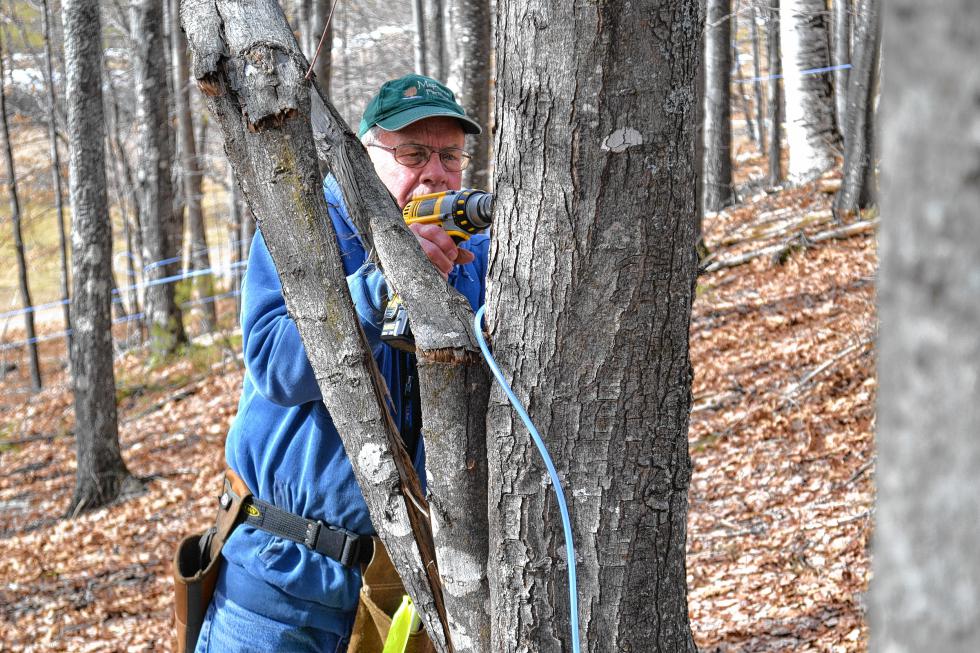 Mapletree Farm owner Dean Wilber uses his trusty drill to notch out a spot for one of his 1,000 or so taps for this year’s sap collecting operation. (TIM GOODWIN / Insider staff) 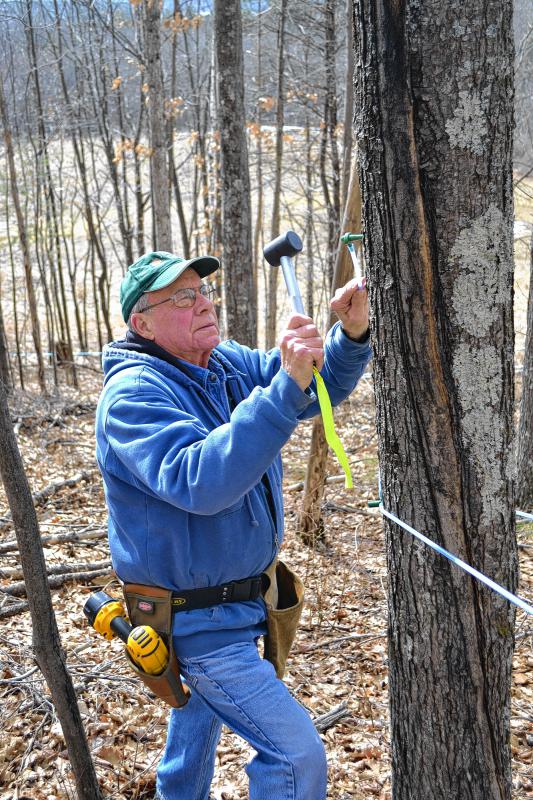 Wilber inserts one of the taps into a sugar maple using his time trusted technique of tap, tap, boom. (TIM GOODWIN / Insider staff) 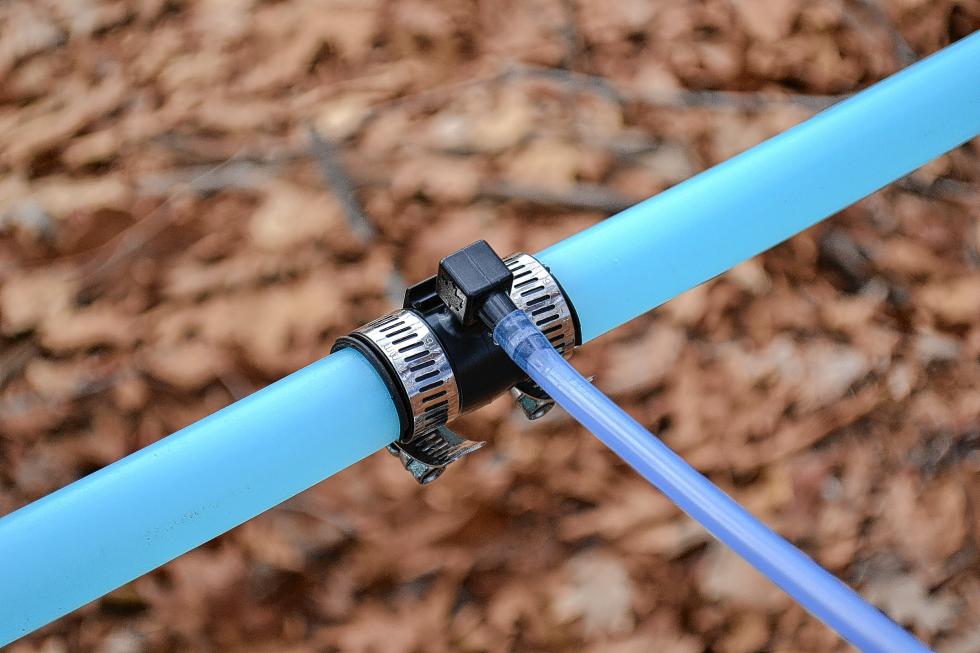 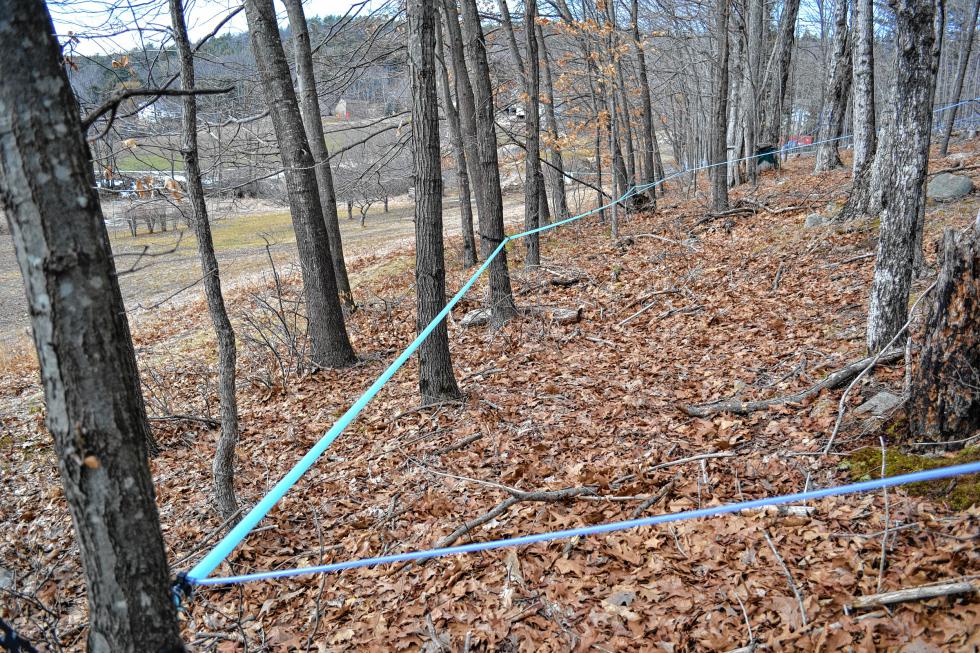 Look at all that tubing. (TIM GOODWIN / Insider staff) 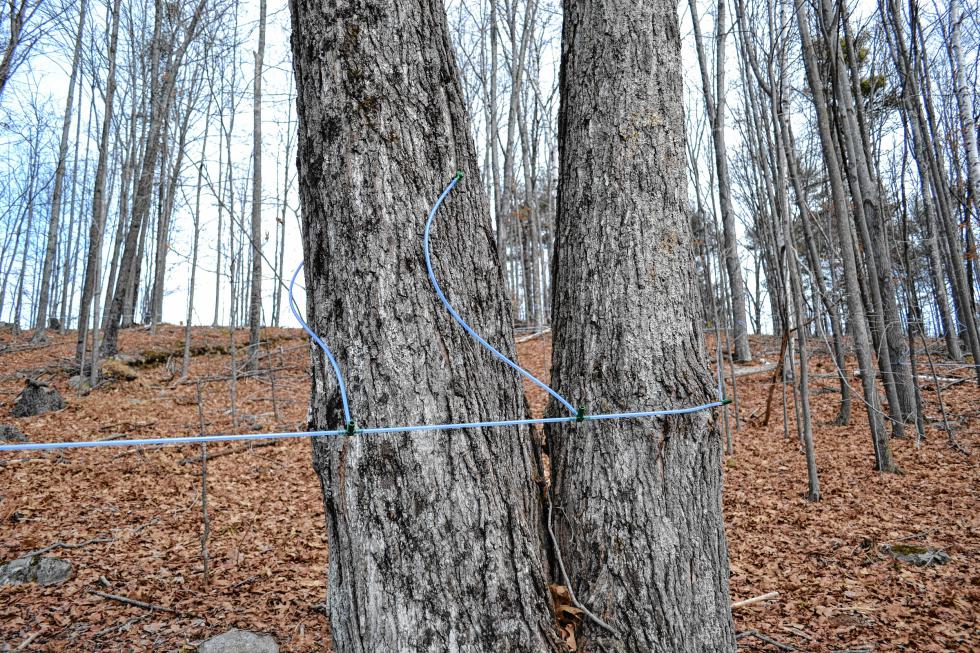 It’s only a matter of time before the sap starts flowing through those taps. (TIM GOODWIN / Insider staff) 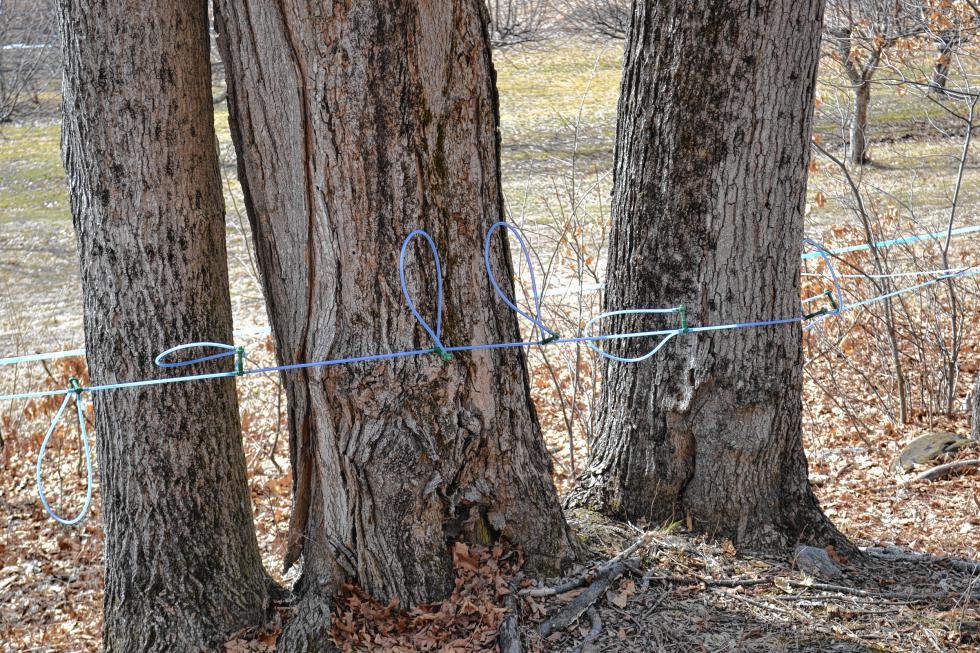 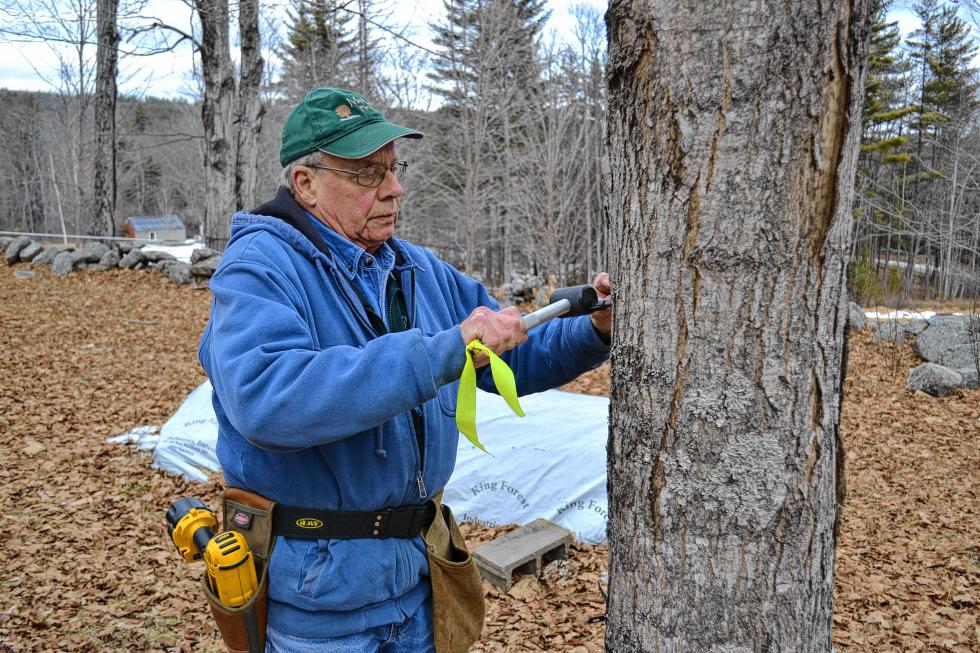 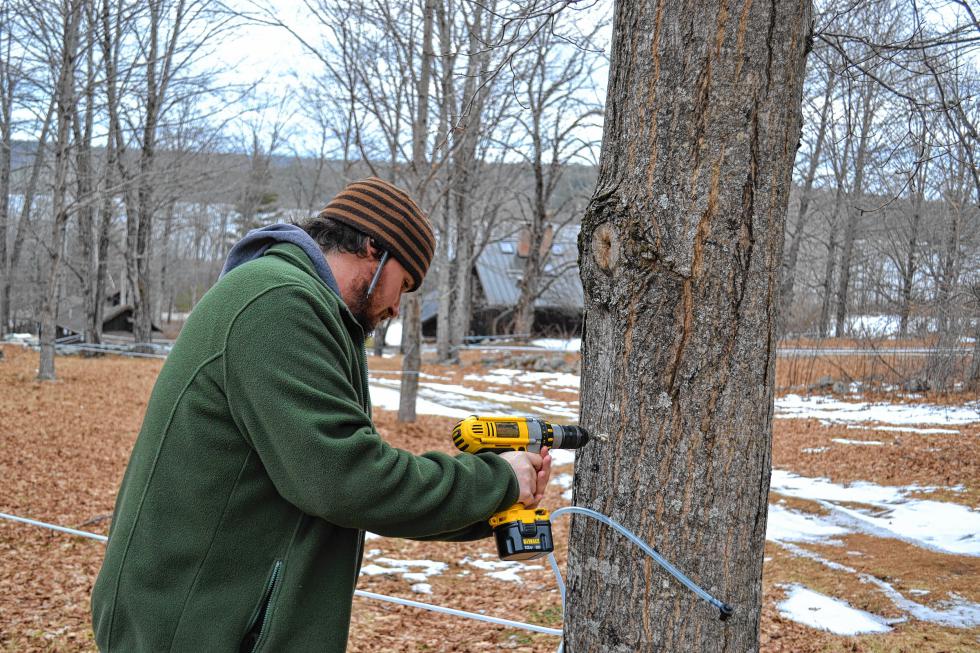 Just look at Tim drilling that tap hole. (DEAN WILBER / For the Insider) 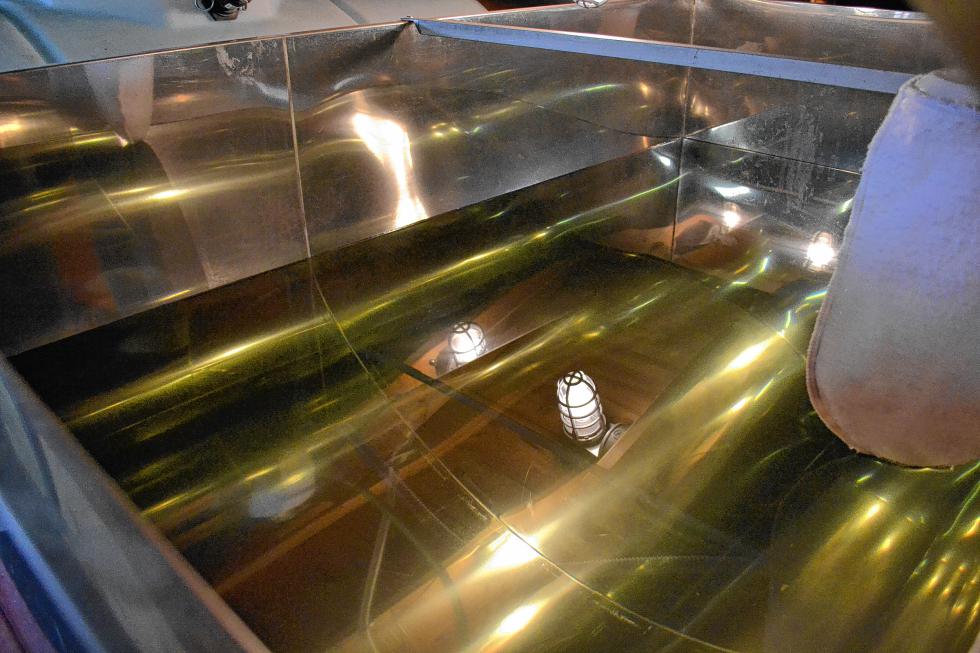 Some of the early sap collection. (TIM GOODWIN / Insider staff) 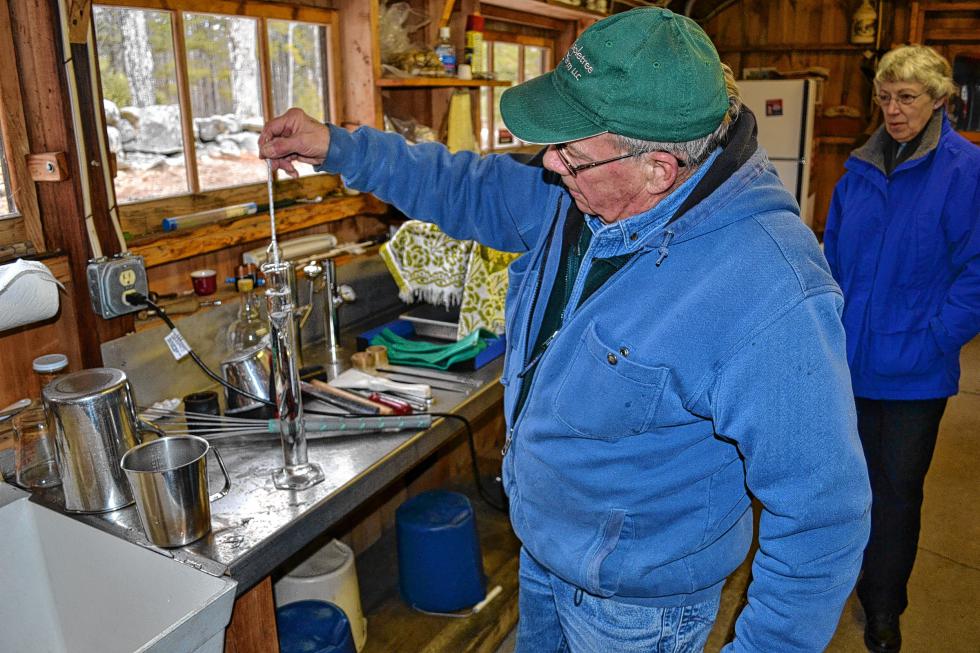 If you’re a fresh maple syrup connoisseur, you probably know that time of year is fast approaching.

It’s hard not to get excited about that first jug of the season, but be patient because the really sweet stuff isn’t quite ready.

You’ve probably started to pay a little closer attention to those plastic lines connecting maple trees on the side of the road these days and if you look real close, those large holding tanks will soon be filled to the brim with fresh sap.

But the process of getting that sap from the tree to on top of your pancakes is probably a bit more time consuming and labor intensive than you ever imagined. We found that out first hand when we spent an afternoon with Dean Wilber, owner of Mapletree Farm.

“You don’t just put a spout in a tree and get syrup,” he said.

If you didn’t know, the sap gathering season is a very short window.

“If you’re not ready, you’ll lose it,” Wilber said.

Wilber doesn’t like to tap the trees if the temperature is below 20 degrees in fear of splitting the bark. So he began the long and tedious process of tapping his 1,000 or so trees spread out over six locations in Concord and Loudon the third Saturday of February in order to be ready for what he calls the first good flow, which usually begins the first week of March.

“It hasn’t run much yet,” Wilber said early last week. “It runs when the weather conditions are conducive for sap to flow.”

What we learned is that in order for sap to run from the roots all the way to the leaf buds at the end of the limbs and back down, there needs to be a freeze/thaw cycle. That means it needs to be between 38 to 44 degrees during the day and then drop down to 26 to 28 degrees at night.

“The sap goes up during the day and drops down during the night,” Wilber said.

And as you can probably guess, the more times it goes from the roots to the limbs and back again, the sweeter it gets – at least to a point. It’s not like you’re going to get maple syrup flowing from the trees if you wait as long as possible.

“This is only the third time in 41 years I have boiled in February,” Wilber said over the weekend.

Putting the tap in an individual tree takes very little time. Since this is Wilber’s 41st year of operation, he’s got it down to a science.

“This was a hobby operation that’s gone to a retirement operation,” he said.

There’s some telltale signs that lets him know the sap is flowing. One is puddles in the roads from broken limbs or where tree crews have been working, as well as when the red squirrels nip the buds and drink the sap. Another sign is melting of snow around the base of a tree, but since there’s no snow that isn’t an option this year.

And with very little snow this winter, it’s been a little easier than a year ago.

“I was on snow shoes every day but one tapping last year,” Wilber said.

First, he looks over the tree, checking out the crown and limb sizes, as well as finding previous tap holes. He’ll see how far the tap stretches and determine where he wants to drill this year’s tap.

“I look for all fresh wood,” Wilber said. “You want time to look the tree over.”

He wants to make sure there’s no kinks in the tubing and that it’s above the line that will bring the sap to the filling tank.

Once he’s picked out the perfect spot, he uses his trusty drill and correct size bit to make a hole. Wilber wants a straight on hole – no wobbling with the drill – so the tap fits in perfectly. No one wants to see sap leaking out. Might as well just flush money down the drain.

And then with his trusty mallet, Wilber performs a tap, tap, boom as he calls it, where generally the first two hits tap it in and the last one tells you it’s as far as it will go.

The hole is anywhere from 1 1/8 to 1¼ inches deep and the tap goes in about ¾ of an inch. Got to make sure there’s space for the sap to flow in. He’ll tap trees once they’re about 9 to 10 inches in diameter and ones that are 18 inches can have two.

Now the tubing you see connecting all the trees in the woods off many roads in New Hampshire has a shelf life of about 15 years – and don’t worry, Wilber thoroughly cleans his each spring. But he does replace the taps each year and added a new check ball piece to all his existing line taps this year that prevents back flow of sap into the tree.

We say existing taps, because Wilber added about 220 new trees to his sap generating arsenal and is using the wooded area not too far from his Concord abode as a bit of an experiment. He used a smaller 3/16 inch tubing (normally it’s 5/16) and is looking to see what kind of natural vacuum the downhill slope can create.

“It’s an ideal situation to use the natural vacuum,” Wilber said.

Over the weekend, he saw some favorable results.

And sure, it will give him extra sap this year to make delicious tasting syrup (and we know because we’ve had it), but it also added quite a bit of labor to get ready for the season.

It took a little over a week’s worth of work to lay out the 4,500 feet of 3/16 tubing, along with about 700 feet on main line connected to a 225-gallon tank. There’s an average of 22 taps leading into each lateral line off the hill.

“The whole point is to have it straight, tight and down hill,” Wilber said.

And during the season, Wilber walks all his lines about once a week.

“We look for animal damage, typically squirrel or deer, and for any blow downs,” he said.

When sap really starts flowing, he’ll keep a close eye on his seven tanks, which range from 65 to 335 gallons.

“If it runs exceptionally well, I might have to gather it night and morning,” Wilber said.

And soon, all that sap, which is only about 5 percent of what the tree produces, will be turned into maple syrup you can buy. That is also a very involved process, but a story for another day.