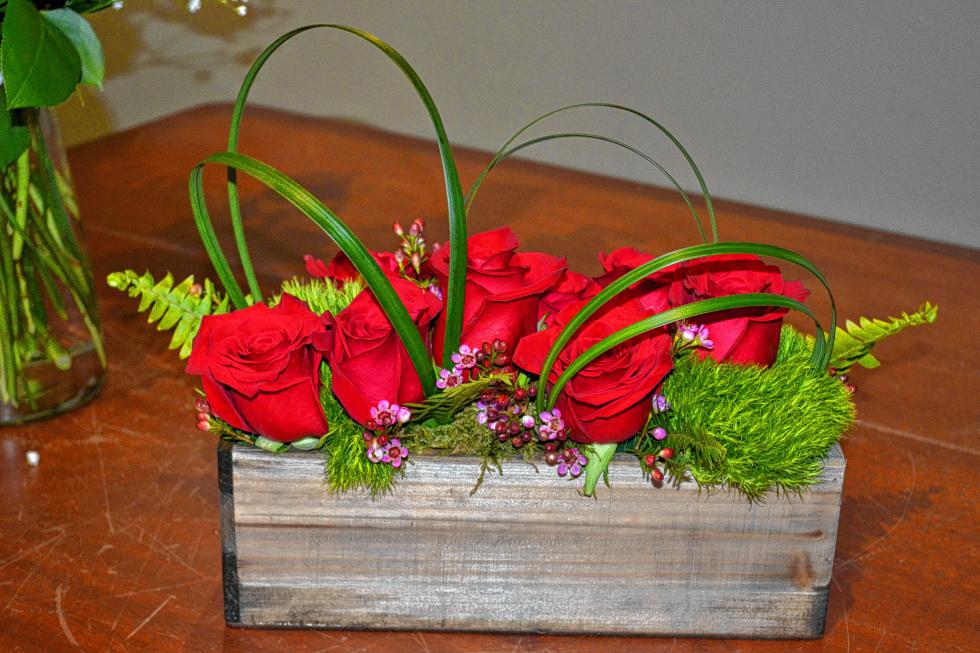 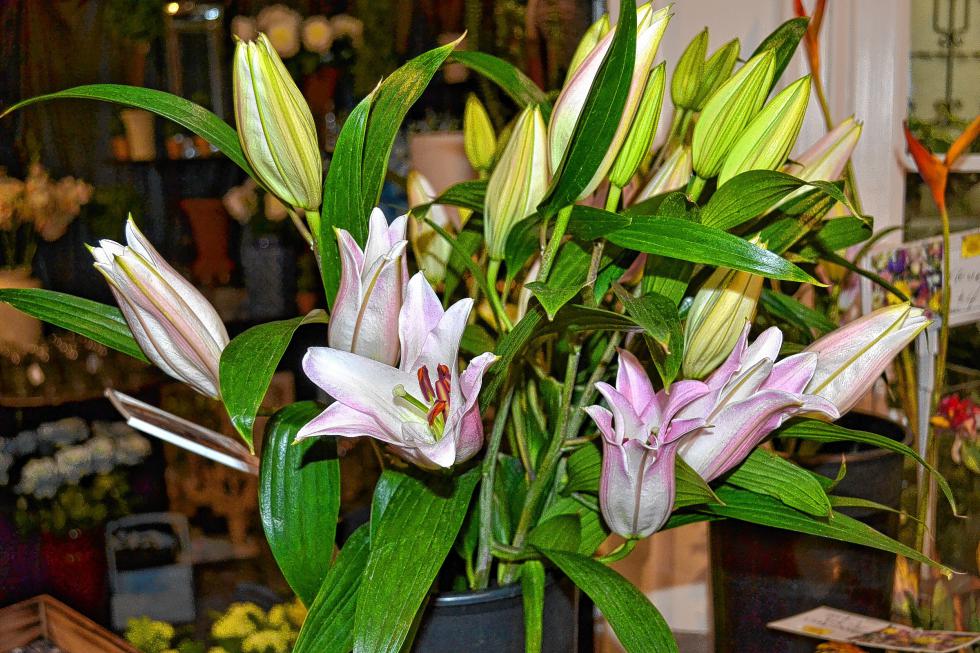 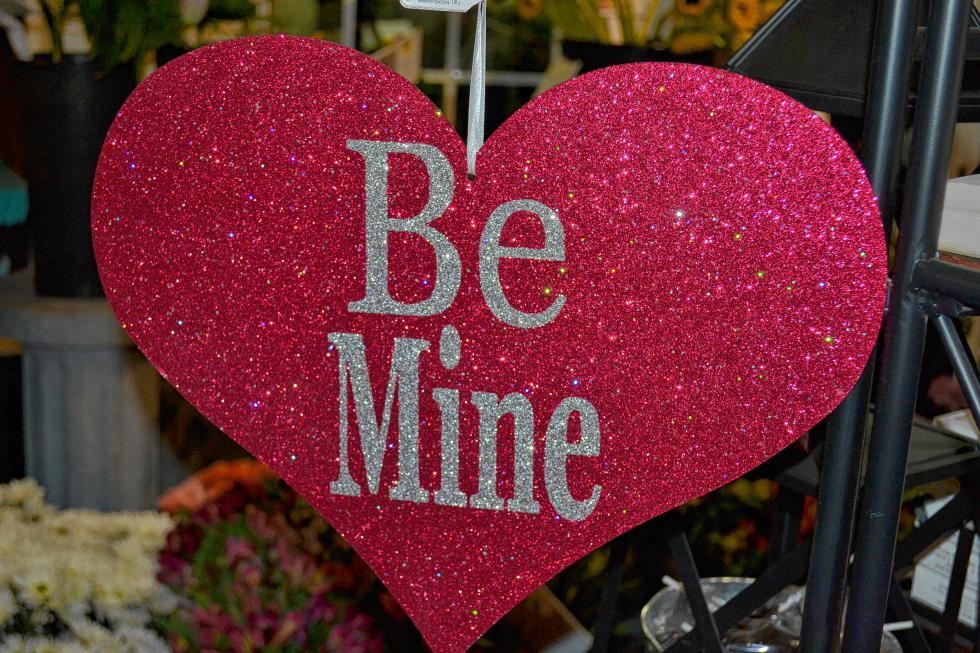 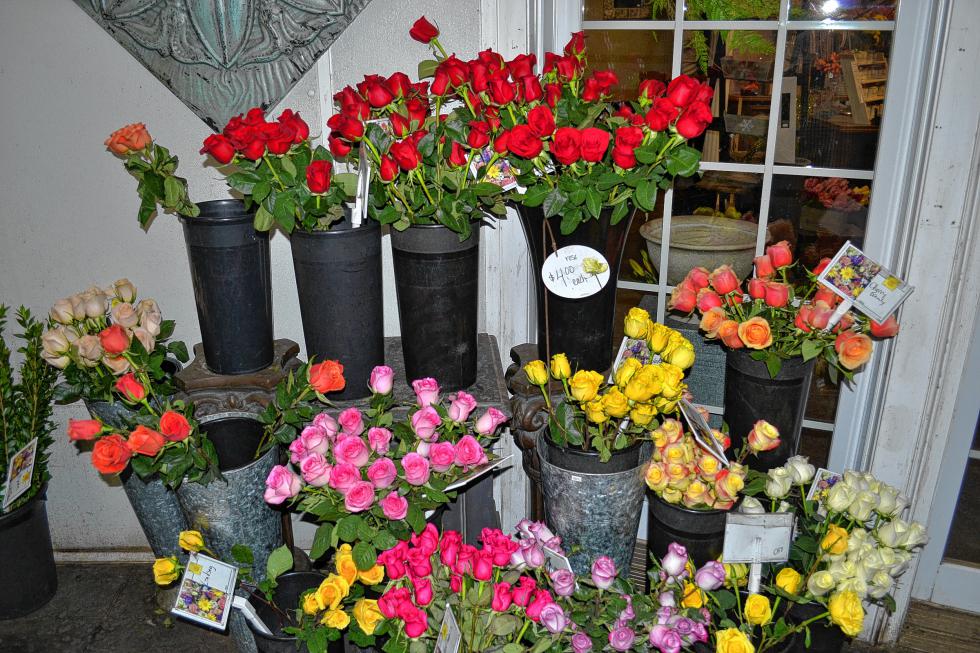 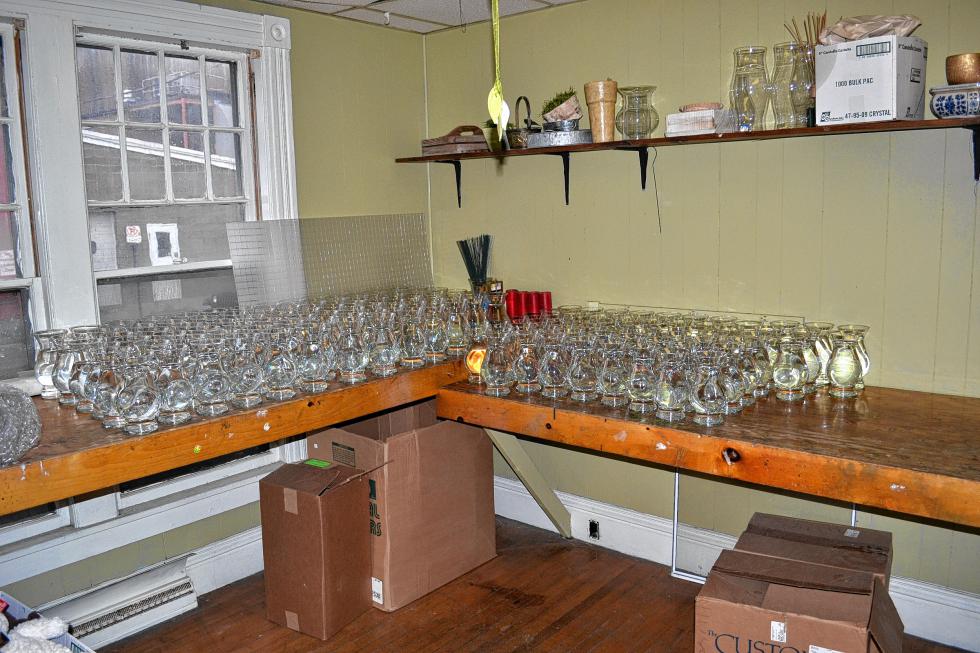 Look at all those vases D. McLeod is ready to fill this Valentine’s Day and that’s not even all of them. (TIM GOODWIN / Insider staff) 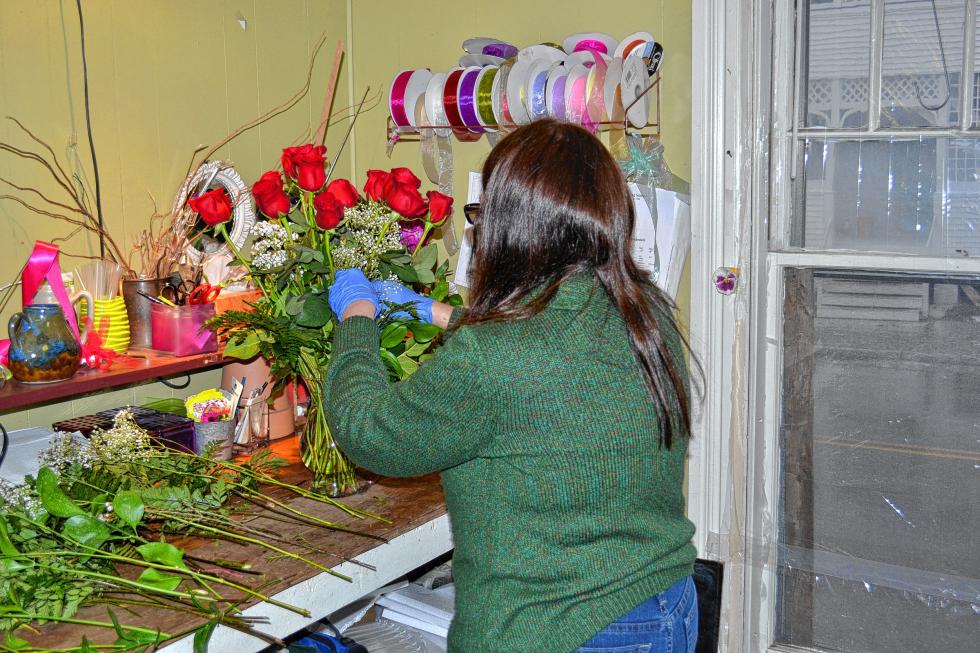 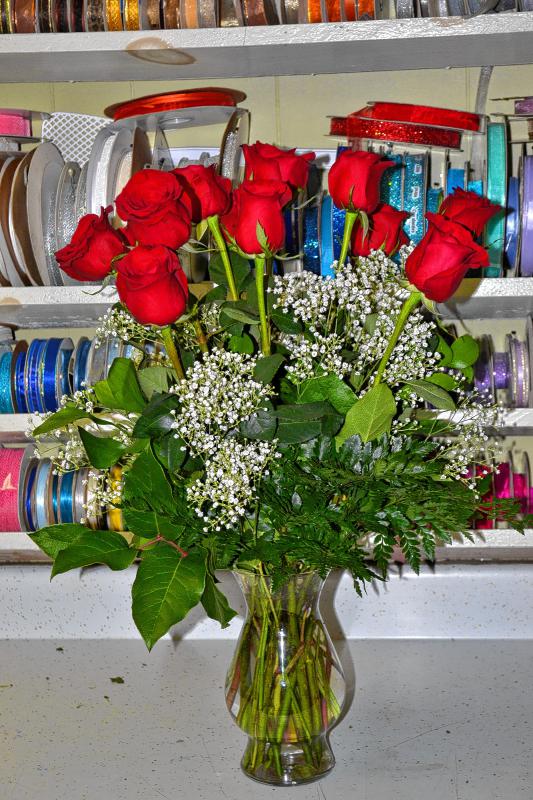 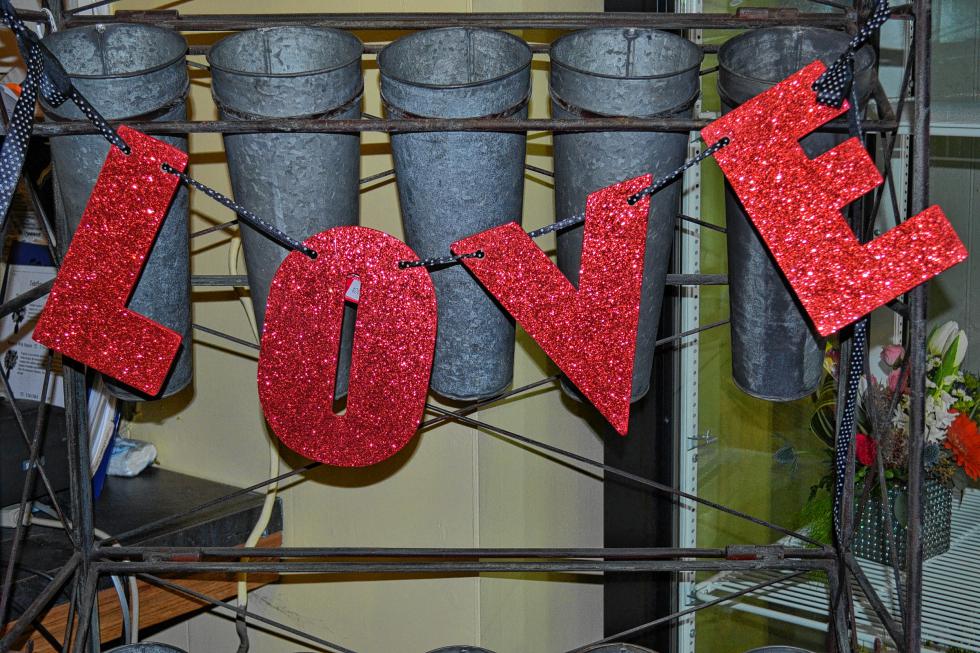 It's what Valentine's Day is all about. (TIM GOODWIN / Insider staff) 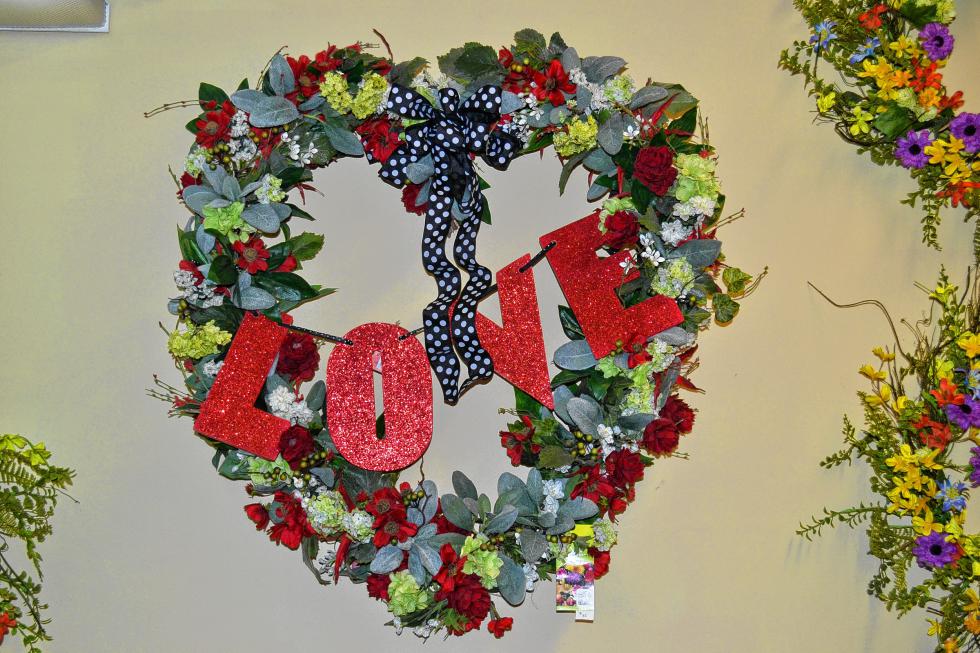 Love is in the air this time of year and apparently on wreaths as well. (TIM GOODWIN / Insider staff)

Just for a second, imagine your busiest work day of the year.

We know, it’s not all that fun reliving the stress that comes with it, but we wanted you to have that feeling. We wanted you to visualize the chaos that it means. Because for local florists at D. McLeod, Cobblestone Design Company and Cole Gardens, that day is just around the corner. Yep, you guessed it, Valentine’s Day is by far the most hectic one on the calendar, and they’ve spent the last few weeks planning for it.

It means nonstop phone calls – like phone ringing off the hook, can’t get through kind of nonstop – delivery drivers hitting just about every neighborhood in town and people walking through the door at the very last moment in search of that perfect way to say ‘I love you,’ ‘Be mine’ or ‘Hey, I think you’re cute.’

“It’s a lot of back-breaking work,” said Wendy Rexford, Cole Gardens’s designer. “I have to be very organized and prepared, and I’m going to have one crazy week.”

And while this year’s day of love might be a little slower than the last couple, it doesn’t mean the craziness won’t still be there in full force. With Valentine’s Day falling on a Sunday, the ones who put together all those beautiful arrangements, believe the absence of a wow factor – like the one you get when you send a dozen red roses to your love’s office – will keep some people away from flowers this year. But nonetheless, they still expect plenty of business between Friday and Sunday.

They could very well even run out of a lot of flowers by the time things are all said and done – even though they’ve tried to plan in a way so that doesn’t happen.

“Friday will probably be the busiest day,” said Rick Talbot, owner of Cobblestone. “During the week of Valentine’s Day, we have five designers just making arrangements.”

“We anticipate Friday will be absolutely crazy, Saturday will be busy and we don’t know what to expect on Sunday,” Rexford said.

Since the majority of the orders will come from guys and let’s face it, there’s not too many of us out there who have spent a lot of time figuring out what are the best flowers to buy, likely most of what goes out of the florist’s doors will be red roses. They’re kind of the signature gift for Valentine’s Day and a safe way to make sure you enjoy all that Valentine’s Day entails and not spending the night sleeping on the couch, if you know what we mean.

“It’s pretty much a guy holiday,” said D. McLeod owner Fred Keach. “And for a lot of guys, it’s the only time they call us.”

And it’s nothing to be ashamed of. Red roses are a nice gift and while we aren’t females, show us one who doesn’t enjoy a nice bouquet of them – especially on a day like Sunday. They typically come with some nice looking greens, a splash of baby’s breath and maybe even an assortment of other flowers too.

“The people who get roses are usually the ones who only get them on Valentine’s Day,” Talbot said.

When we start talking numbers, it might be a little surprising. Talbot expects to sell somewhere around 2,000 red roses, along with 500 pink, 500 white and another 500 in yellow. Keach’s numbers are around the same, as he anticipates between 3,000 to 4,000 total roses heading out his doors. As for Cole Gardens, Rexford said it’s hard to put a number on the amount of roses they send out, so let’s just says it’s a lot. Add in all the bouquets and arrangements and you can see why it’s going to be a busy day/week.

“Trust me, there are tons and tons of guys who come in last minute,” Rexford said.

Before you start complaining that flower shops jack up their prices to make a quick buck on Valentine’s Day, we want to tell you a little about this thing called supply and demand. Because actually, it’s the growers who want more money, which in turn means the wholesalers charge more and thus the local florists have to pass some of that extra cost on to you. How much you ask? Well, if you went out last week and got a dozen roses, they would have cost you $60. For Valentine’s Day, a dozen will go for around $95.

“You can take the same money you’d spend on roses and get a really nice arrangement. My personal preference is to do something unusual and very colorful,” Keach said. “But the majority of flowers that go out the door are roses.”

So you don’t have to go with roses if that’s not your – or her – thing. There’s plenty of other great flowers, like lilies, sunflowers and gerbera daisies that can be the star of your flower show.

“Usually one of the larger flowers in your focal and you work from there,” Talbot said. “Just leave it to the designers and what we do best.”

And without the wow factor of sending flowers to her place of work so her co-workers can all admire how much you care about her, the number of home deliveries may go up from an already staggering number – which is why all three places will have extra drivers available.

“It’s our craziest time of year, but when you work in this business you have a passion for flowers,” Rexford said.

It’s an all hands on deck approach. From designers to drivers to little flower fairies if those even exist, anybody and everybody associated with these local flower shops will be available.

“We have one person who only processes roses for three days,” Keach said.

So if you’re thinking about getting a nice arrangement for that special someone in your life, don’t wait till the last minute. Sure, if there’s time they’ll fit you in, but think of the tail end of Valentine’s Day at a florist like any store on Christmas Eve – you’re not always going to get what you’re looking for.

“The earlier you can call, the better it will be,” Keach said. “It’s important folks call ahead of time.”

If you want to call today and place your order, it might be a good idea. That way you’ll get what you want and you can stay as far away from that dog house as possible.

“If you know you want to order flowers, give us a couple days,” Talbot said.