Want to know why Bow is so beautiful? Meet the Bow Garden Club

Home » Featured » Want to know why Bow is so beautiful? Meet the Bow Garden Club 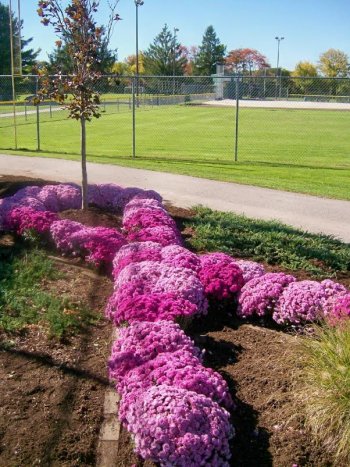 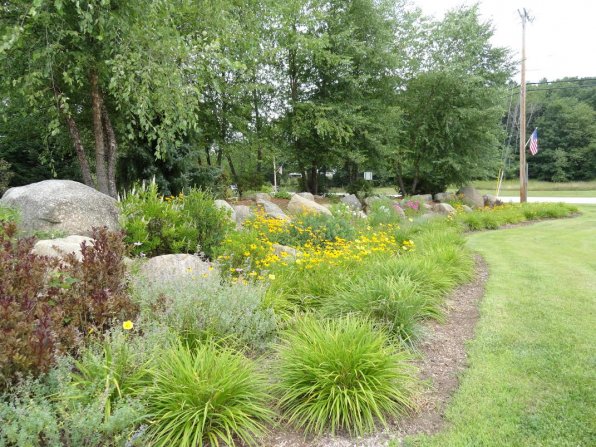 That’s Rotary Park, one of the many places the club takes care of. 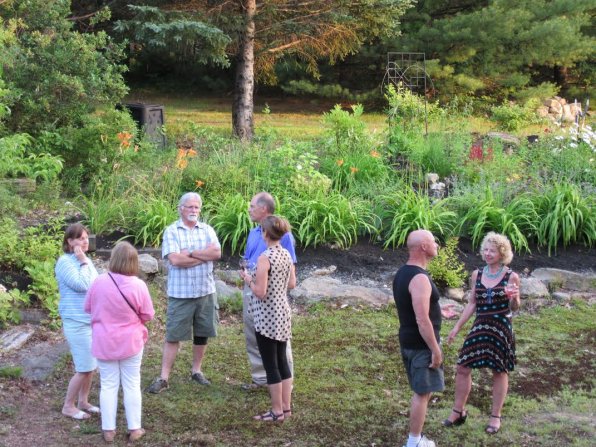 The Bow Garden Club sure does like flowers and plants. So much so that from time to time members host gatherings at their homes to show off their hard work.

If you’ve ever taken a leisurely drive through the town of Bow, there’s a good chance you’ve seen some of the Bow Garden Club’s handiwork.

At the gazebo, they’ve planted pink roses and yellow daylilies in memory of founding member, Tempie Dahlgren, and keep the flower boxes looking bright and beautiful. Rotary Park is another one of their stomping grounds that gets weekly attention during the spring/summer. They also help out at the municipal building, the Old Town Hall and the Baker Free Library ’cause everybody in town knows they are the ones to see about planting, maintaining and pruning. That’s probably why members get so many calls and suggestions about places that need a little sprucing up.

“People choose a week during the growing season to go in and help maintain it,” said publicity Chairwoman Joyce Kimball, who has been a member for the last 15 years. “We take great pride in what we do.”

It’s likely why the list of community beautification spots has continually grown over the years. After all, the club’s website does have a slogan on the main page that reads “Keeping Bow Beautiful since 1964.” From what we’ve seen, the club’s keeping up its end of the bargain.

For those of you who don’t know, the club has now been around for 51 years. Of course, in typical Insider fashion, we are a little late to the game. If this was last year, we’d have been right on time to help celebrate the big 5-0, but instead, we have to be the ones who make a big deal out of the year after the big to do.

The club started way back in 1964 when three ladies, Dorothy Wheeler, Patricia Smith and Dahlgren decided to create an organization centered on gardening. Over the years, things have certainly changed, but keeping the town looking good has always been a point of emphasis, hence the many spots in town that have beautiful flowers and bushes to look at.

“We have some big areas in town we like to keep up with as best we can,” said civic beautification Chairwoman Kerry Buckley, who is also a past president. “And the more people who do it, the more they feel invested.”

From April through November, members gather on the second Monday of each month at the Old Town Hall for a meeting. Not all of the 41 members show up each month ’cause, let’s be perfectly honest, sometimes people have other things going on in their lives. But members come when they can, and judging by the itinerary for the night, we can see why. They start off at 6 p.m. with social time and refreshments, and then move into the programming part of the meeting at 6:30.

“We have really good food,” Kimball said. “One of the husbands called us the flower and food club.”

The programming consists of a guest speaker who will tell you all you need to know about a certain aspect of gardening. Topics so far this year have been based on raised bed gardening and growing heirloom tomatoes and daylilies. Next up on the docket for September’s meeting (Sept. 14) is all about composting – you know, turning all those food scraps into some pretty hearty stuff to spread around the garden. In October, the info will be about cacti and succulents, and wrapping up the year in November will be holiday tablescapes, which will most definitely help brighten up your home when the fam comes over for the yearly gathering.

“We’ve branched out a bit,” Kimball said of the programming.

“We try to vary it because everyone has different interests,” Buckley said.

For some time now, the membership has hovered around 40, give or take a few from year to year.

“The good majority of us have been around for at least 10 years,” Kimball said.

Unfortunately, there are only two men currently in the club.

“We need to get some more men back in here,” Kimball said. “We have a bunch of guys who help in so many ways, they’re just not official members.”

And just because it’s called the Bow Garden Club, doesn’t mean you have to actually live in the town to be a part of it. They have current members who live in Penacook, Dunbarton, Candia and Canterbury, and an honorary member in Port St. Lucie, Fla. It’s not about where you live, but rather about your passion for gardening – and willingness to help out with the civic beautification projects.

“You meet people you normally wouldn’t know,” Buckley said. “We have new people join every year. Some people join ’cause they don’t know anything about gardening.”

And to be a part of it, all it will cost is $15 a year. Now you might be wondering how they get all these great guest speakers to come in and take care of all those spots in town. Well, each spring they do a plant sale and they also sell poinsettias in December. Some of the money raised goes to the community service projects, along with a scholarship each year to a Bow High School student interested in studying gardening and horticulture and a conservation camp scholarship for a middle school student. They also have a junior program that meets once a month to do anything from plant seedlings to floral decorations.

“I always have something for the kids to do,” Buckley said.

The club is also one of 20 or so organizations in the state that belong to the N.H. Federation of Garden Clubs.

“It’s simply a matter of choice,” Kimball said. “We like it ’cause it allows us all sorts of rewards.”

For more info about events or joining, visit bowgardenclub.org.