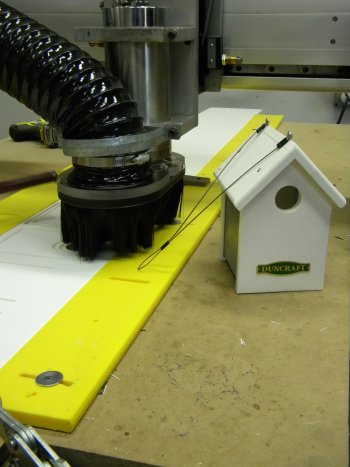 That’s a pretty snazzy finished product, eh? Designed by Mike Dunn himself, it sits next to the machine where its parts were made as its brother is being born. 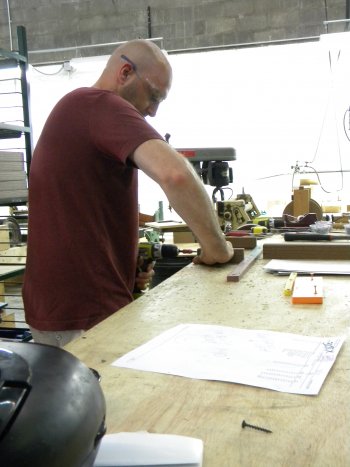 Dillion White gets after it in the Duncraft lab.

“Look at this list,” Mike Dunn tells us as he opens to a page in Stores Magazine, a publication of the National Retail Federation. The top of the page reads “2015 Top 100 Retailers.” The page he flips to lists the top 25, with the other 75 on the following page. “The highlighted ones sell bird feeders,” Dunn says. We count the companies he’s highlighted. Fifteen of the top 25, and every single one of the top 10.

While the companies listed aren’t focused solely on bird feeder sales, they also wouldn’t carry bird feeders in their stores if they didn’t sell. With that in mind, what may seem to some like a niche market – selling bird feeders – is, in fact, anything but.

Upon returning from WorldWar II in 1952, Dunn’s father, Gil Dunn, started Duncraft, the “Wild Bird Superstore” on Fisherville Road. He became an innovator for windowsill bird feeder designs, allowing bird watchers a close-up view of birds as they ate directly outside the viewer’s window. By the 1960s, Duncraft was publishing mail-order catalogs, and in the ‘70s, Mike took over the company, which he runs to this day.

Just three years ago, Duncraft became a direct-to-consumer business, no longer selling its products to wholesale retailers. Priding themselves on the direct relationships they have been able to grow with their customers, Shelby Dunn-Kimball, Duncraft’s chief marketing officer called it “the best decision we’ve ever made.”

Although based in Concord, an overwhelming majority of Duncraft’s business is all over the country, and sometimes beyond, with recent shipments to Brazil and Nigeria. Duncraft has received orders from a number of celebrities, including presidents’ wives and famous actors and actresses. The company keeps its showroom in Concord, the only place you can directly buy their feeders, open as a way to give back to the community that has helped see them grow over the past 63 years.

With more than 700 exclusive designs and extra attention paid to finding solutions to common problems such as squirrels, rain, and bears, Duncraft is an innovative and far-reaching company and it doesn’t seem like they will be going anywhere in the near future. Producing around 250,000 inpidual feeders each year and shipping off about 90,000 packages annually worldwide, it’s clear that Concord’s own bird feeding masterminds are flying high.