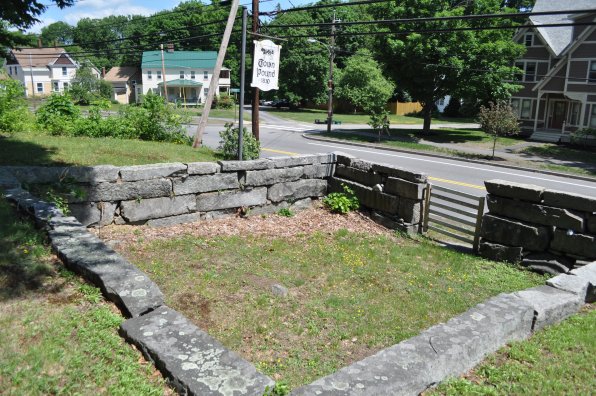 There wasn’t any livestock in the town pound when we stopped by, but we’re keeping a close eye on Old Man Thompson’s pigs – they’ve been creating quite a ruckus in the neighborhood lately. The next time one gets loose, we’re gating it in this inpenetrable fortress that consists of very short walls and a rickety gate. Good luck solving that escape riddle, pig!

If you spend any amount of time driving on North State Street, you’ve probably developed successful coping strategies for road rage. But you’ve also probably noticed the old Town Pound. We sure did. And we’ve always wondered exactly what it was all about.

That’s not a surprise, of course – whatever it is, it hasn’t been utilized for quite some time, maybe since 1830 if you believe the date painted on the weathered old sign that also features a lovely image of a cow.

We threw the town pound into the old Google machine to learn more about it, and we found some interesting stuff. Like, it has a Facebook page.

We know what you’re thinking – an inanimate town pound can’t have more Facebook friends than me, right? No. The page appears to have been updated a grand total of two times in 2012, and features no information.

We had better luck on a blog called The Geneology Gals, which is just an awesome thing to have exist. Those fine ladies did some research and discovered that town pounds are a New England phenomenon, with some states even requiring one when towns were officially incorporated back in the day.

In those days, when wandering livestock – most commonly cows or pigs – caused problems for residents, the town pound was where they were stashed until the owner could pick them up – and pay the accompanying fine. Apparently even fowl was held there, though security seems minimal for things that have functional wings.

Our favorite nugget from The Geneology Gals? That “there are also reports that at least on occasion the town pound might be used to contain human offenders.” Yeah, looks secure.

What we didn’t find, though, was anything in particular about OUR town pound. And that’s what we really want. So help us out, readers – if anyone has any information or fun stories or old pictures of our town pound, email news@theconcordinsider.com. We want to know all about it!