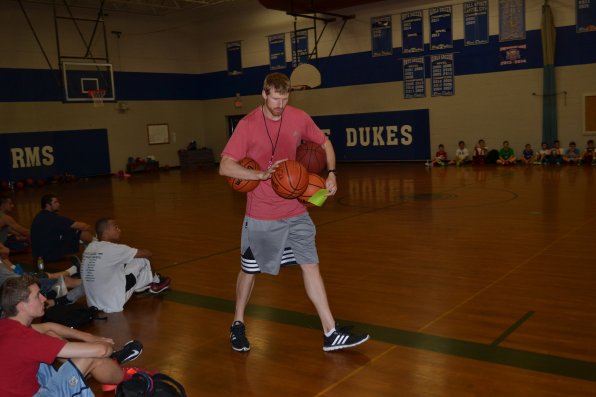 Most of us would be pretty happy possessing the ability to palm a basketball, but Concord legend and New Hampshire’s only NBA player Matt Bonner prefers to do it while holding three other balls and a piece of paper. Now you see why he’s in the NBA and we’re not.

We’re pretty sure you’ve all heard of Matt Bonner – you know the only NBA player from New Hampshire, all-time leading scorer at Concord High and a dude who is constantly in search of the best sandwich known to mankind. He also let us tag along on his tour of the city with the NBA championship trophy last summer and we have pictures to prove it.

Bonner has now played 11 years in the NBA with the San Antonio Spurs and Toronto Raptors, but is entering the offseason as a free agent. And we can confirm he is not taking his talents to the Concord rec leagues just yet.

But even with a resume like that, Bonner still comes home each summer to host a basketball camp for area players – and in recent years, to spend some time with us.

During a break in the action last week, we sat down with Bonner for a little one-on-one about Concord, sandwiches and what was up with that music video he made with some of his Spurs teammates this season.

What’s your favorite thing about coming back to Concord?

What’s you favorite NBA city to visit and why?

So we see you’re a free agent, any chance you will take your talents to Boston? Or our Concord rec league team?

Probably not the Concord rec team just yet, but I would prefer to go back with the Spurs. That’s kind of my first option and if that doesn’t work out then move on to plan B, which would obviously be to catch on with another team. We’d have to see whose interested, and it’d definitely be nice to come back home and play for the C’s.

Since you’re famously known for the Sandwich Hunter, if you’re trying out a new sandwich shop what’s your go to order?

I find either the owner or the person whose been working there the longest and I ask them two questions: One, ‘what’s your best selling sandwich?’ And two, ‘what do you think the best sandwich is?’ And then I make a choice from that.

What’s your favorite non-Concord sandwich shop in the country?

Can it still be in New Hampshire? (Insiders: Sure.) Biederman’s in Plymouth. (Insiders: And what’s the sandwich there?) All of them.

To me the toughest defender is on my team, Kawhi Leonard. I don’t play against him in games, but in practice if he’s anywhere near me on defense I will not even attempt to dribble and just try to pass it as soon as possible. The toughest to cover? Kevin Durant. There’s just a sense of helplessness that you can’t stop him from getting the shot he wants.

We saw your music video with some of the Spurs this year. How’d that come about, and how long did it take to pull off?

I came up with the idea ‘cause I’m a big Tim and Eric fan and I love their Sports video, which is what it was based on. I don’t know how the idea came to me, but I came up with the idea if you change sports to Spurs, it would be hilarious if I could get some of my teammates to play the band members. I was thinking I was going to have to put together a huge powerpoint pitch to get my teammates to do this, but the first three guys I asked said yes. We made it at the School of Rock in San Antonio and shot it in about an hour and a half.

If you didn’t play in the NBA, what would you have done?

What do you think so far of the Main Street redesign?

I haven’t seen it since they opened half of it, so I’m not super qualified to make a comment on it, but I think it’s an awesome idea to create some outdoor patios and stuff. I like it.

When was the last time you and Luke played one-on-one, and if you played today who would win?

If we played today, I’d win because his arm is broken in like three different places, so he can’t use one of his arms, so that kind of makes that question easy. But the last time we played was probably five or six years ago, long time ago.

We hear you’re the GM of Team Grantland in the upcoming Basketball Tournament: what can we expect from you guys, and are we looking at a future GM in the NBA ranks?

You can expect a lot of entertainment. That’s the only thing I’ll promise ‘cause we have a ton of characters on our team. As for future GM in the NBA, you gotta start somewhere.