If you can run, bike and paddle, you should do this triathlon

Home » Articles » If you can run, bike and paddle, you should do this triathlon 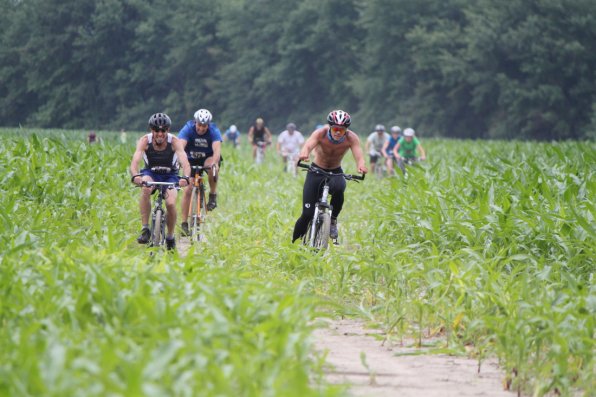 Nothing says triathlon like biking through a cornfield next to a river in the middle of summer.

Even hearing the word triathlon can be a bit intimidating.

Not only does it mean actually working up the motivation to be physically active, but you have to compete in three different disciplines. Don’t worry though, we’re not about to try and convince you to participate in a 2.4-mile swim, a 112-mile bike ride and a marathon (26.2-miles) in that order with no break. One reason is that most of you would laugh at us and flip the page – and who would blame you?

But what if we tamed those distances down a little bit, would you be interested then? Because the fourth annual Merrimack River Greenway Trail Triathlon is coming up July 19, and it won’t be nearly as taxing as the distances we described above, which we might add, would be difficult for us to accomplish in a boat/car without stopping. Don’t get us wrong, it will be challenging because any kind of competition can be strenuous, but if you want, you can do it as part of a team.

“My whole angle is to get people off their butts and active,” said event creator Tom Walton. “The whole idea was to showcase the potential of what would become the Merrimack River Greenway Trail.”

The event is similar to year’s past – there will be a two-loop, 4-kilometer off-road bike around the outside of the corn fields behind the complex at 6 Loudon Road, followed by a 3K run along the Merrimack River, also consisting of two laps, and a 3K paddle in the river.

“The format is the same,” Walton said. “It’s quite scenic.”

Now, if you don’t have a human powered watercraft, which is required for the final leg of the triathlon, there’s good news. Quickwater Canoe & Kayak has a limited amount of boats to rent, but you just have to contact them before the event to reserve one – and they’ll even bring it down for you. EMS also has rentals available, but you need to pick them up and return them yourself.

So if you’re feeling up to it, you can do all three legs yourself, which equates to a 10K and a little over 6.2 miles, or split it up with one or two teammates.

For inpiduals over the age of 18 completing the entire course, cost is $30. For youths doing the triathlon alone, the price tag is just $5. Relay team members over 18 will spend $25, and youth relay members are still only $5.

Registration opens at 8 a.m. the day of the triathlon with the ironperson portion (those doing it by themselves) starting at 9:30 a.m. The relay portion begins at 11 a.m. The event will be held rain or shine.

“It’s very fan friendly,” Walton said. “Everything comes back to a central spot.”

For more info and to register, visit mrgt.org.